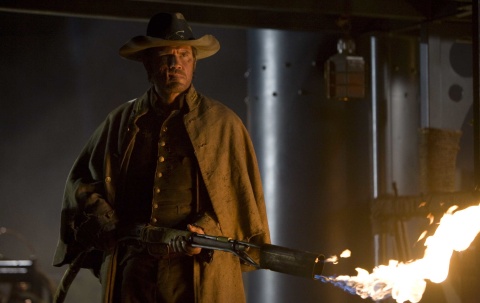 I have seen quite a few comic book movie bombs in my day but I can honestly say that director Jimmy Hayward’s 2010 monstrosity Jonah Hex has got to be one of the worst I have sat through. Based on the DC Comics gunslinger created by John Albano and Tony DeZuniga, Jonah Hex is rank with studio interference, cropped down to a blink-and-you’ll-practically-miss-it runtime of just barely over eighty minutes. It really is a shame that this film has been butchered as bad as it has because the talented Josh Brolin pours everything he has into the growling bounty hunter who can speak to the dead. I bet Brolin even gagged when he added this to his resume. Severely incoherent, massively brainless, and loud to the point of making your ears bleed, Jonah Hex is such a mess that I have to say I can’t believe the studio even bothered tossing it into cinemas in the first place. I honestly have to say I hope someone lost their job over this because I would have locked this film away, crossing my fingers that no one would ever stumbled upon it and unleash it on the world. It is THAT bad.

Jonah Hex begins by flashing back to the Civil War, with our hero (Played by Brolin) serving on the Confederate side of the conflict. Hex is ordered by his commanding officer, Quentin Turnbull (Played by John Malkovich), to burn down a Union hospital. Hex refuses to carry the order out and retaliates by gunning down his friend and Turnbull’s son Jeb (Played by Jeffrey Dean Morgan). Turnbull tracks down Hex just after the war ends and proceeds to burn Hex’s family alive and make him watch. He then horribly disfigures Hex’s face and leaves him for dead. After several days, a group of American Indians stumble upon Hex and nurse him back to health. As Hex regains his strength, he realizes that he possesses the power to reanimate and speak to the dead by touching them. Hex is anxious to get back on his feet and find Turnbull but he learns that Turnbull died in a fire shortly after he massacred Hex’s family. To deal with his pain, Hex turns to bounty hunting but is soon approached by Lieutenant Grass (Played by Will Arnett) with news that Turnbull is alive and well. It appears that he has robbed a Union train of a weapon component for a doomsday device that can wipe entire towns off the map. Grass recruits Hex to set out and stop Turnbull before he can locate all the pieces of the weapon that he needs.

Judging by all the star power in Jonah Hex, I have the sneaking suspicion that the original script had much more to it than what we actually see on the screen. There is no way any A-list actor like Brolin would agree to be in something this god-awful. Brolin really takes his role seriously, growling through gritted teeth as he rides around rotting western towns, laying waste to anyone who dares piss him off. It is a shame that his back-story is brushed over with an animated flashback that fails to really add anything to his character. We are just supposed to accept that he is mad and he won’t be getting glad until he stands over Turnbull’s corpse. Hex finds an ally in Lilah (Played by Megan Fox), a beautiful prostitute who practically drools all over her cleavage when Hex knocks on her door. Fox is only in Jonah Hex to serve as some obvious eye candy for the male audience that this is aimed at. Her character adds nothing to the poor excuse of a story that is strung throughout the film. Brolin seems to just be humoring her when she is in his eyesight—even he seems perplexed why she is in front of the camera. 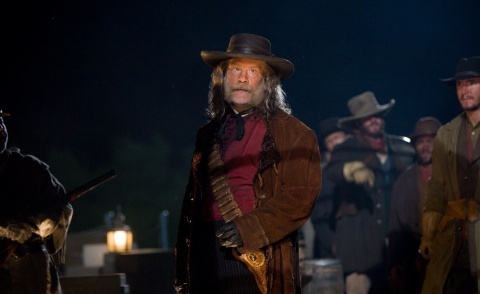 Then we have Mr. Malkovich’s Turnbull, a vile baddie who has a really evil plan that lacks a motive (Those are the worst, aren’t they?). Lt. Grass and President Grant (Played by Aidan Quinn) fret and stew over Turnbull’s horrific doomsday cannon and where he will strike with this weapon of mass destruction. Turnbull spits that he will wipe the United States off the map but he never explains why. Why is he so gung-ho on leveling all of these cities? Don’t expect an answer to that question. Just tremble in your boots as he sips absinthe and makes threats at wealthy aristocrat Adleman Lusk (Played by Wes Bentley), another character that adds absolutely nothing to what is going on. Turnbull leaves the gruesome enforcement to his giggling Irish right-hand man Burke (Played by Michael Fassbender), who I suspect is sometimes chuckling at what he has been asked to do by the director. Fassbender’s character is sort of interesting but he is always shoved behind Turnbull, who looks like he raided the wardrobe closet of Pirates of the Caribbean. While you are trying to get over the fact that Fassbender even attended this party, you’ll also be reeling from the fact that funnyman Will Arnett has shown up and is trying to be taken seriously as Lt. Grass. Both Arnett and Fassbender are probably hoping that you forget they were ever in this picture.

The action of Jonah Hex is earsplitting, muddled, and forgettable as it is set to pounding heavy metal music from the band Mastodon. The film features poor special effects and every action sequence is clipped too short to really be fulfilling. The finale is an absurd fistfight in the clanking steam punk engine room of Turnbull’s floating warship. He unleashes cannonball like delay-action bombs on Washington D.C. but there is never the threat that he will detonate them. You know Hex will throw a tomahawk into his plot at just the last second. Refusing to let us get to know any of the characters in the film, Jonah Hex is a hollow summer blockbuster with no feeling or direction. It is a free-for-all of noise and missed opportunities, with little care put into the development of Hex’s character. Even worse, the film seems like it was made in a mad rush just to get it on the big screen as quickly as possible and so DC had something to release against Marvel’s Iron Man 2. Overall, if Jonah Hex rides again, let’s hope it is given to filmmakers who actually respect his character and have an interest in his origin. Avoid this film at all cost.

Jonah Hex is available on Blu-ray and DVD.