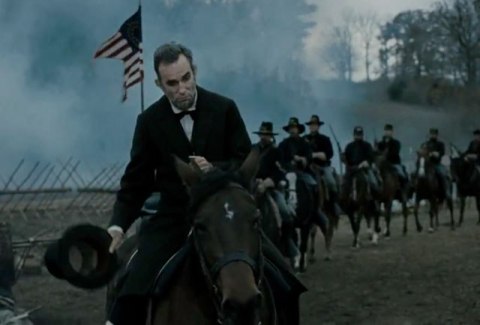 I’m starting to think that there is no role too great for Mr. Daniel Day Lewis. The man continues to top himself with each new role and with Lincoln, director Steven Spielberg’s new war drama, he may have given the performance of his career. With Lewis’ uncanny performance as the centerpiece, Spielberg, who blew us away last year with heartwarming boy-and-his-horse drama War Horse, spins a film so rich, detailed, and satisfying, it almost demands a second viewing to fully appreciate this towering instant classic on a technical level. I was in absolute awe over the fussy attention of each set piece, astonished by the grade-A lighting flowing into each scene, and fully immersed in this meaty slice of informative history that drops us right into the thick of the battle to pass the Thirteenth Amendment. But it all comes down to Lewis, hidden behind a beard and a few expertly blended prosthetics, as he settles into the role with a thin but warm smile. He is a man with the weight of the world on his shoulders, a weight that he sometimes begins to collapse under but hides with a clever story that will lighten the mood when the tempers flare and the nerves churn around him. You can’t help but admire this man even when Spielberg and screenwriter Tony Kushner dare to shed light on him in his fits of desperation.

Picking up during the last four months of Abraham Lincoln’s (Played by Lewis) life, the Civil War continues to rage and the battle to end slavery is heating up in Washington. Lincoln, his Secretary of State, William Seward (Played by David Strathairn), and cranky abolitionist Thaddeus Stevens (Played by Tommy Lee Jones) join forces to gather the number of votes needed from opposing Democrats in the House of Representatives to pass the Thirteen Amendment. As he attempts to convince those stubborn voters, Honest Abe uses his down-to-earth charm and hilarious anecdotes to win them over. He also sends out a trio of lobbyists, W.N Bilbo (Played by James Spader), Richard Schell (Played by Tim Blake Nelson), and Robert Latham (Played by John Hawkes), to earn votes. As the pressure to pass the Amendment and end the war escalates, Lincoln battles with his grieving wife Mary Todd Lincoln (Played by Sally Field) over the death of one of his sons and pleads with his son, Robert Todd Lincoln (Played by Joseph Gordon Levitt), about enlisting in the army.

At two and a half hours, Lincoln is far from the typical biopic that we all expected it to be. In all honestly, I think the final product would have suffered and bored us to tears if it chose to dive into Lincoln’s early years. The film opts to pull the curtain off of the small details and reveal the smoky meetings in the White House, where Lincoln and his staff debate over the best way to earn votes and win the war. When they can’t agree, Lincoln pauses and offers a little story to lighten the mood. Some of these stories are so veiled that they even stump Seward, who replies blankly with, “I have no idea what you are talking about.” When we aren’t in the meticulous drawing rooms of the White House, we are crammed into the stuffy House of Representatives, where the men bicker, scream, yell, and argue until they are blue in the face about the Thirteenth Amendment. While it certainly is interesting to get a behind the scenes look at this historical moment, it seems to lack suspense, mostly because we know the that the Amendment is going to be passed. In a way, that is the precise problem with Lincoln. There is never a moment where you are caught holding your breath. Instead, Spielberg focuses on carefully telling this historical epic in the grandest sense. 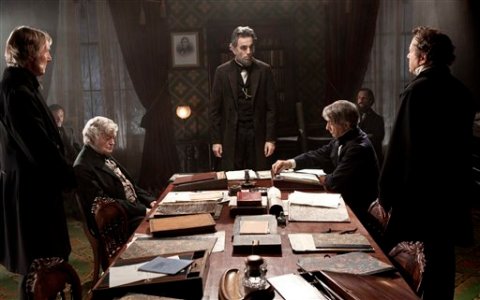 Then we Lewis, who pours everything he has into Honest Abe and completely disappears into the role of the 16th president. Folks, there are just simply not enough hours in the day to rave about this spellbinding performance. You just can’t help but love Abe as his lanky frame lumbers into a room and warmly embraces every face he meets. Lewis plays Lincoln as a sly politician who can win you over with a few perfectly delivered jokes. As a husband and father, Lincoln isn’t great but he tries his hardest. You can’t help but feel for the guy as he gets ripped up one side and down the other over the fact that he suggested the Mary be checked in to a mental institution when one of their sons died. He also doesn’t win any points with Robert, who begs Abe to let him enlist in the army. He rants about his embarrassment over not being able to wear a uniform during a party at the White House. The moment that hurt the worst was when Abe tries to reason with Robert but Robert just storms away in anger. As Abe watches his go, he silently whispers, “I can’t loose you.”

Lincoln may belong to Lewis but the supporting cast members are all brilliant in their own ways. Fields is an emotional force as Mary Todd Lincoln, who grapples with a grief that sends her into shocking fits of hysteria. Every blow of accusation she dishes out to Abe is even more severe then the last. When it comes to her politics, she can really grab a room. She shares a scene with the curmudgeon Stevens that finds a whole room holding their breath. Jones brings his long face to the role of Thaddeus Stevens, who is a firm defender of the Thirteenth Amendment. He is also handed a number of punchy one-liners to help keep things a bit playful (there is a good one about his wig). Levitt, who has been everywhere this year, shows up here as Abe’s antsy son Robert. He isn’t handed infinite amounts of screen time but his desperation to join the war is brave. Strathairn is firm and no-nonsense as Seward, the prickly Secretary of State who gets a little exasperated with old Abe and his anecdotes. Spader, Nelson, and Hawkes are all tasked with lightening the drama as three hilarious lobbyists. Spader is especially hilarious as he jogs after opposing Democrats and breathlessly argues and bribes them for their vote.

Despite ignoring his early years, Lincoln ends up feeling like the ultimate biopic, one that is immensely infatuated with its subject. Spielberg goes to great lengths to paint Lincoln as a man who isn’t perfect but is trying so desperately to do the right thing. Clearly a passion project, Spielberg pours his all into this and it shows right up to the end, making him a strong contender in the Best Director category at the Oscars. Lewis, meanwhile, should just be given the Best Actor Oscar right now and save the Academy the trouble of sorting out that category. So the question stands, is this Spielberg’s finest hour? Well, it is certainly is a triumph and it certainly ranks with the best of his work. Whether you love Spielberg or hate him, you can’t deny the fact that Lincoln is a touching, thoughtful, intelligent, reflective, and towering piece of filmmaking that will certainly be remembered for years to come. Best see it now so it can be admired on the big screen because your television will not do it justice.

There is a moment in the new HBO film Game Change that is particularly striking.  Upon delivering his concession speech after his loss to Barack Obama, John McCain fades into the spotlight amongst the growing chants of “Sarah!  Sarah!”  Woody Harrelson, who portrays McCain’s chief strategist Steve Schmidt, watches in horror as his “game change” becomes an uncontrollable entity, a force in the Republican Party that, as of 2012, is leading to its ultimate demise.

Game Change is riveting theater, a look into an historic moment in our nation’s history.  Lagging in the polls behind “celebrity” Barack Obama, John McCain (Ed Harris) needed something to shake the campaign up.  The economy was tanking after eight years of a Republican president, and like it or not, McCain was tethered to the sinking ship that was the Bush administration.  The film kicks in around August 2008, when sitting with his advisors, McCain decides to go for broke and make a “bold choice” in a vice presidential running mate selection.  McCain wants Joe Lieberman, the Independent Democrat Senator of Connecticut; the campaign wants someone who is not a white male elitist.  The problem is that it is getting down to convention time, and while the other choices for Vice President have been vetted, they are still unacceptable.  Enter the game change.

After five (five!) days of vetting (in what is usually a multi-week process), McCain and his advisors agree on the unknown Governor of Alaska, Sarah Palin (a brilliant Julianne Moore).  She is attractive, insanely popular in her home state, and a solid conservative who balances out McCain’s more liberal political positions.  She lights up a crowd and can bridge the enthusiasm gap that Republicans are lacking when it comes to Obama and the Democrats.

But looks can be deceiving.  Palin, who with much more time and experience, could have been a decent candidate is thrust into the national spotlight without so much as any experience (or knowledge) to be one heartbeat away from the most powerful office in the world.  The stress of the campaign begins to fracture Palin, pushing her to the verge of a nervous breakdown.  She begins to worry about her standing in Alaska, rather than the national campaign and the mission ahead.  Her advisors quit, and the campaign (particularly Schmidt) begins to wonder what they have gotten themselves into. 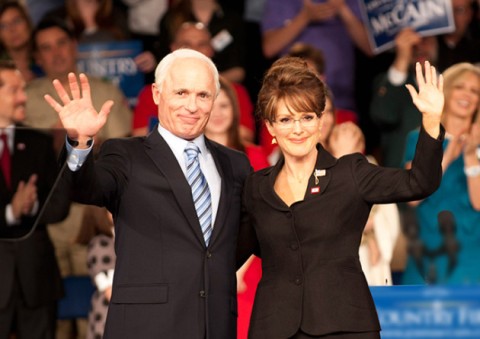 There is a turning point in the campaign, however, that snaps Palin out of her funk.  Instead of teaching her everything about everything (and there was a lot she didn’t know), they campaign begins to feed her talking points.  She gains her confidence back and a transformation begins.  Sarah Palin becomes the celebrity that Obama is; she becomes an uncontrollable lightning rod that feeds off of the masses (which, I must say, Obama is not).  Sarah Palin morphs from a respected governor into “Sarah Palin”, the woman who is around today.

Game Change is quite a fascinating character study.  Moore’s performance is incredibly restrained.  For someone who has been lampooned constantly, Moore brings humanity back to Sarah Palin.  Her performance reminds us that Palin was a person who has feelings, who loves her family, and cares for her country…but then we see the morph of someone who is ultimately corrupted by our current American political system.  There is a sad scene where Moore’s Palin is watching Tina Fey’s Sarah Palin on SNL; she can’t believe that they are laughing at her, not with her.  The look on her face is heartbreaking, because she is realizing that she is not being taken seriously, but rather as a national embarrassment.  This is a turning point, because she then begins to famously “go rogue” and do things her own way.  She in a way becomes a Frankenstein Republican, the product of a desperate campaign and the victim of a vicious sense of entitlement.

Game Change is not a perfect film, but it is indeed an entertaining one.  The performances and fireworks between Moore and Harrelson are particularly noteworthy and deserving of Emmy consideration, as is Harris’ subtle and enjoyable McCain.  With that said, political junkie or not, Game Change is a very entertaining, cautious tale about the dangerous road our democracy is headed down.