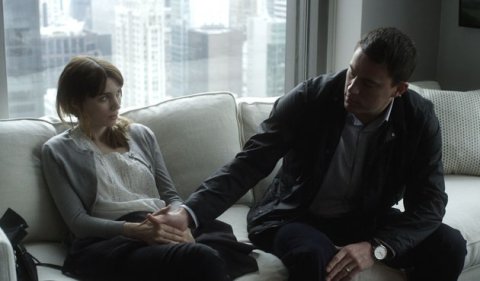 Rumor has it that Side Effects, the slinky, sexy new psychological thriller from busybody director Steven Soderbergh (Contagion, Haywire, Magic Mike) will be his final motion picture. If this is true, Side Effects is certainly a high note to bow out on. An edge-of-your-seat exercise that would please Alfred Hitchcock, Side Effects threatens to take aim at prescription drugs and the long lists of side effects that may come with taking them, but half way through, Soderbergh and screenwriter Scott Z. Burns decide to double cross the viewer. What comes next is a glossy, upper-class murder mystery that creeps up behind you and sends a chill down your spine. It certainly isn’t the film you expect it to be, mostly because Side Effects has been advertised as a hazy tale of prescription drug side effects spiraling those who pop the anti-depressant Ablixa, the fictional drug prescribed to those suffering from depression within the film, into a murderous daze. You will be surprised by what the filmmakers have in store for you and, more importantly, you will not be able to resist the sensual pull of the story. And then there is the haunting performances, mostly from the unpredictable Rooney Mara, who constructs another firecracker of a character.

Side Effects follows 28-year-old Emily Taylor (Played by Rooney Mara), the wife of Martin Taylor (Played by Channing Tatum), who recently returned home after serving a 4-year prison sentence for insider trading. As Martin figures out a way to get their lives back on track, Emily suddenly attempts to commit suicide. After recovering, Emily is sent to Dr. Jonathan Banks (Played by Jude Law), a psychiatrist who puts Emily on a number of anti-depressants that appear to do nothing for her. With every option exhausted and Emily still contemplating suicide, Jonathan decides to put Emily on the experimental drug Ablixa. Ablixa appears to be helping Emily and her life with Martin seems to be getting back on track, but one evening, Emily viscously attacks Martin in a daze. Emily is arrested for the attack and the police begin an investigation that could threaten Jonathan’s practice. Growing desperate to get to the bottom of the mysterious attack, Jonathan seeks out Victoria Siebert (Played by Catherine Zeta-Jones), Emily’s former psychiatrist who offers up disturbing new information. As Jonathan digs deeper into Emily’s past, he stumbles upon secrets that will not just destroy his career, but also shatter his happy marriage.

Side Effects turns out to be a very difficult film to review, as the second half of the film is ripe with surprises, some being very clever and some flirting with silliness. The film really gets by on its element of surprise and its best you don’t know much about the story going in. Despite some far-fetched touches to the script, the film does keep you intrigued with where it is going to slither off to next. If Side Effects turns out to be Soderbergh’s last film, he can retire knowing that he delivered an extremely well-made film. Some scenes begin out of focus, with characters or objects slowly revealing themselves to the viewer. It is a nifty touch that subtly mirrors the secrets of the plot slowly becoming clear to the viewer. It also gives the film a surreal feel, making the lavish New York City penthouses, offices, and apartments seem chillingly distorted or generally off-putting. Soderbergh then drenches the sets in a warm orange glow with plenty of ominous shadows creeping over the characters, their lavish worlds slipping into a darkness. Then there is the inescapable erotic atmosphere that hangs over the shady events, a seductive mood complimented by sexy trip-hop tunes on the soundtrack. It certainly is a hip and pretty package that is eager to compliment its four photogenic leads. 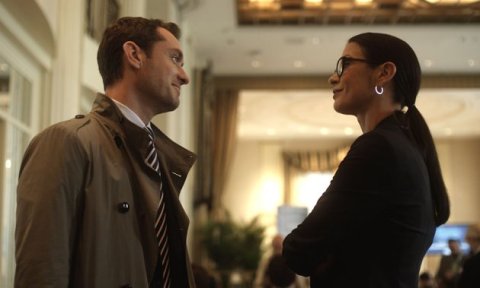 Bringing the sexual sparks she brought to The Girl with the Dragon Tattoo, Rooney Mara sizzles once again as the glassy-eyed Emily, a woman drunk on wealth and distraught over it disappearing in the blink of an eye. She is bone chilling as she descends into bizarre sleepwalking spells that find her fixing dinner for three even though she has no children with Martin (another plot twist that rattles the viewer). When she blankly jabs the knife into Martin’s stomach, more than a few people in the showing I attended jumped and erupted in horror and disbelief at what was occurring. It is clear that Mara is aware that she is very good at doing crazy and she really brings the crazy here. It is said that Blake Lively was originally up for the role of Emily but thankfully it went to someone with more talent. Tatum does a fine job as the confused yet understanding husband, who is well aware of the grief he has brought on Emily. He is given a supporting role here but he doesn’t resort to phoning the performance in. Law wins us over as a victim caught up in a web of lies and deceit. You really feel for him as his life crashes down around him and you’ll smile to yourself as he devises way to stay one step ahead of those trying to bring him down. Zeta-Jones is as vampy as ever as the sinister Victoria, a woman who acts as if she wants to help the troubled Emily any way she can yet conceals disturbing behavior in the past.

At an hour and forty-five minutes, Side Effects is practically over in the blink of an eye because, frankly, there is never a dull moment. Soderbergh is constantly framing a fascinating image, capturing a spine-tingling performance, or making the hair on your arm stand at attention when Emily slips into a daze. You can’t shake the feeling that the film would have fared better if it would have kept its attention on prescription drugs and their seemingly never-ending list of side effects. Still, Soderbergh and Burns refuse to dumb themselves down in the second act even if they do get a bit carried away with a certain relationship (you’ll see what I mean). Overall, Side Effects is a surprisingly beefy film that is glaringly out of place for this time of year. A handsomely made and clean-cut thriller that isn’t afraid to send the viewer away deep in thought. Side effects may include your stomach twisting into knots, a desire to see it twice, an unwillingness to take any medication you may be on, and an incurable fear of Rooney Mara. See it before all the surprises have been spoiled.