In all the years I have been seeking out and watching cult classics from years past, by far one of the most unusual is Jane Fonda’s kinky 1968 science-fiction film Barbarella. Based on the French comic books by Jean-Claude Forest, Barbarella certain does look like it stepped out of the pages of steamy pulp in intergalactic go-go boots. Directed by Roger Vadim, Barbarella is a carefree and trippy celebration of Fonda, who was married to Vadim at the time the film was made, and her bare naked body as it flits around sets that look like leftovers from Forbidden Planet. While it is certainly not a film you would seek out for an absorbing story, Barbarella comes up a half-winner due to the alien worlds it sends us off to and the tongue-and-check jibber jabber that is delivered through half-cracked smiles by each and every actor in front of the camera. While there are plenty of moments in this soft-core color explosion to like, there are plenty of moments where the extreme camp and bloodshot misadventures of Barbarella wear thin on the viewer. I certainly found myself struggling to stay on the line cast by Vadim, mostly because the initial thrill of the film’s flamboyant manifestation fades about half-way in and we are left with a goofy piece of pop art struggling to keep its head above the boiling cosmic goo.

In the distant future, sexy space traveler Barbarella (Played by Jane Fonda) is zooming through the galaxy when she receives a transmission from the President of Earth (Played by Claude Dauphin). The President asks Barbarella to travel to the planet of Tau Ceti and retrieve Dr. Durand-Durand (Played by Milo O’Shea), the inventor of a devastating weapon called the Positronic Ray, and return him and the weapon safely to Earth. As it turns out, Earth is now a peaceful place, where weapons are forbidden and sex has a man and woman taking exaltation transfer pills and pressing their palms together. Barbarella accepts the mission and as her adventure plays out, she hooks up with Catchman Mark Hand (Played by Ugo Tognazzi), blind angel Pygar (Played by John Phillip Law), kindly Professor Ping (Played by Marcel Marceau), and the evil Black Queen of Sogo (Played by Anita Pallenberg). Through these encounters, Barbarella is reintroduced to the joys of real sex and also finds herself partnering with resistance leader Dildano (Played by David Hemmings) to topple the Black Queen.

Barbarella is probably best remembered for the opening anti-gravity strip tease performed by the leggy Fonda, who sheds her stuffy spacesuit and bears it all for those who are interested. It is probably the most artfully photographed scene of the entire film as she dangles in her shag-carpeted spaceship. The rest of the film is just bursting with bottled sexuality that is dying to be uncorked. You’ll chuckle at suggestive set pieces and how the film pauses for one outrageous sex scene after another. The funniest is by far Barbarella’s encounter with Catchman Hand, who pulls off a big furry overcoat to reveal an equally hair chest that has him resembling a big drooling bear. The cosmic sex is complimented by a lounge jazz score that seems horrifically out of place and absolutely perfect at the same time. Things really hit a new level of crazy when a villainous character straps Barbarella into a devise called the Excessive Machine that, yes, pleasures you to death (I couldn’t make this up). Despite the heavy sexuality that will have even the most uptight viewer undoing one or two buttons, Barbarella is fairly tame for a film based on an adult comic strip. It walks a fine line between porn spoof and legitimate science fiction adventure that seems desperate to have a bit more depth. My guess is there is some uncharted lore here but Vadim can’t resist pausing for heavy kaleidoscope petting that becomes a bit stale by the time the film hits the hour mark. 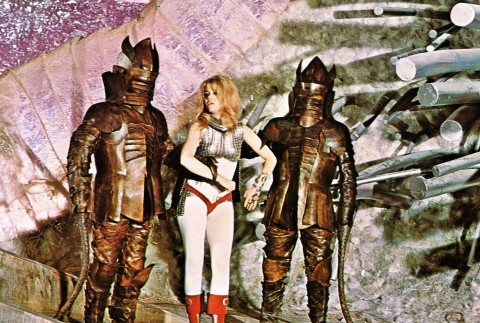 And then there is Fonda’s performance, which thrust her into stardom and proved that she can wear the hell out of a pair of tights. Fonda is portrayed as a gee-whiz goofball with a heavy dash of gullibility and innocence in her big bedroom eyes. There are times where I fully believe she wants to burst into laughter, especially when she is attacked by a bunch of flesh-hungry dolls or answers the President’s transmission in her birthday suit, but she keeps it together. Barbarella also has to hold a record for the most costume changes caught on film. Throughout this hour and forty minute adventure, Fonda wears countless revealing getups that expose her unmentionables in some way, shape, or form. As far as the supporting players go, there is John Phillip Law’s Pygar, an eerie statuesque angel who I swear is a robot. Frankly, I thought he was the most bizarre character in all of Barbarella and he really creeped me out, especially when he stares blankly off screen and says an angel is “love.” Marcel Marceau gets kooky as Professor Ping, who slinks around a wasteland called the Labyrinth while munching on flowers. David Hemmings is the high note here as the bumbling Dildano, a resistant fighter who doesn’t appear to be capable of resisting much of anything. Anita Pallenberg is also a marvel as the lesbian Black Queen who is supposed to be evil but sometimes isn’t. She cackles gleefully through her dialogue that has her calling Barbarella her “Pretty, Pretty”. Milo O’Shea also gets to let his villain flag fly as Durand-Durand but he is never as much fun as the Black Queen.

To be honest, I’m sort of at a loss when it comes to truly evaluating Barbarella because the film almost defies criticism. It’s just such a strange film that you almost have to see for yourself to truly understand how anomalous it is. Part of me really enjoyed all the lava lamp kinkiness but part of me was simply appalled by how bad the film is at parts. I found myself impressed with the meretricious cosmic environment even if some look like they were painted on a giant canvas. I had fun with some of the characters while others just rubbed me the wrong way or freaked me out (Pygar is especially weird). As someone who adores cult cinema, it was easy for me to see why Barbarella has earned such a cult following but more often than not, Barbarella was just boring me rather than entertaining me in a so-bad-it’s-good sort of way. Overall, Barbarella is a middling swirl of hallucinatory Technicolor that quickly wears out its welcome. At least Fonda makes for good eye candy.

Barbarella is available on Blu-ray and DVD.