Book Review: You and Me against the World 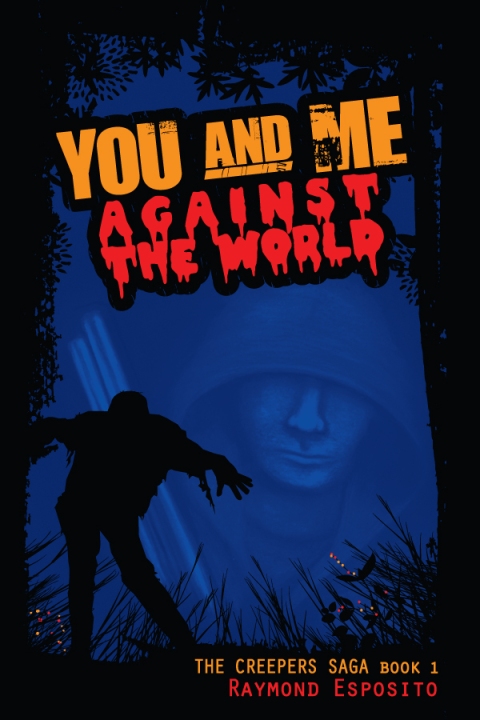 I must confess that I have never written a book review before. Sure, I’ve raved about certain books to friends and rolled my eyes in disgust at others as I flipped past the last page, but I’ve never attempted to give an in-depth review of one. Books have always acted as my escapist entertainment because of my fascination with film. However, a few months ago, I was asked by Raymond Esposito, the gentleman behind You and Me against the World (and who also contributed a wonderful Halloween feature post to Anti-Film School), about possibly reviewing the first book in his Creepers Saga. Honored that he valued my opinion, I quickly agreed to give it a read and I dove right in to his vision of the zombie apocalypse. I must say, as a massive zombie fan, I truly enjoyed and was consistently impressed with this non-stop thrill ride. As I dove deeper and deeper in, it became clear that Mr. Esposito was staying true to the formula that really makes the great zombie stories work. He was placing extremely likable characters in front of his hordes of undead and then unleashing the most terrifying monster of all on his protagonists–fellow man.

On his last day as an oncologist, Dr. Russell Thorn is barely moved by the overwhelming number of individuals showing up in the ER for severe flu-like symptoms. Shortly into his shift, Dr. Thorn is called in to observe a patient that is spewing black bile and suffering from hypothermia despite the boiling Florida heat outside. It doesn’t take long for the patient to pass away, but to the horror of the hospital staff, the patient doesn’t remain dead. It wakes up with an insatiable hunger for human flesh. With the hospital descending into chaos, Dr. Thorn and two young nurses, Susan and Rosa, make an escape from the panic only to be greeted by more cannibalistic terror out in the Florida sun. With nowhere to go and the streets crawling with undead ghouls, the small group makes their way to Dr. Thorn’s home to wait the situation out. After a few days of observing from an upstairs window, Dr. Thorn realizes that the roaming ghouls don’t particularly like the chilly evenings and that they appear to be showing hints of intelligence. To make things worse, it appears as if the zombies know that Dr. Thorn and the two nurses are hiding inside the home. After a very close encounter with a horde of ghouls, the small group is saved by a heavily armed band of young warriors led by the reluctant Devin. Running out of options, Dr. Thorn agrees to join the group and they begin plotting a way to distance themselves from the swarming infected, but as the group will soon learn, there are things lurking out there in the chaos that are worse than the undead.

I was told that You and Me against the World was very cinematic, and I have to agree with this description, but I would also say that Mr. Esposito’s scope is about as epic as it can be, analyzing the zombie apocalypse from nearly every single destructive angle. I’d go so far to say that he comes dangerously close to matching what Max Brooks achieved in his globe-trotting zombie epic World War Z  (hell, you could probably make the books into a double feature of sorts). There are nuclear meltdowns, war, bombings, car crashes, and more all chillingly tucked in amongst Esposito’s beefy character development. He envisions a world that is charred, scarred, and crawling with galloping cannibals his character’s dub “creepers,” who charge their prey while drooling black bile and burrowing underground when the sun goes down to stay warm. Yet Mr. Esposito isn’t content with his virus simply infecting humans. Oh no, things really take a creepy and fun turn when we are introduced to zombie kitties and in a giddy tribute to George A. Romero’s classic zombie film Night of the Living Dead.

In addition to all of the action that Mr. Esposito infuses into his zombie epic, he also presents a staggering number of protagonists for the reader to root for. It is a pretty big group and at first I feared that there may be one hero too many in You and Me against the World, but this is where Mr. Esposito truly shines. He gives each character their own mini introduction and then as the story progresses, allows us to see how each of these characters is connected to the other. While it is up to the reader to pick their favorite among the massive group, my two personal favorites were the baseball bat-wielding Austin and the deadly blue-eyed mute Goldie. And while Mr. Esposito makes all of his protagonists likable, he doesn’t forget to add a handful of vile baddies to the bunch. I don’t want to spoil too much of the fun, but his crazed cult leader is just so much fun to hate, especially when he is threatening to feed a group of terrified children to a ravenous “creeper.”

For zombie fanatics, You and Me against the World is a must for your bookshelf. Make sure you place it between your Walking Dead comics and your copy of the Zombie Survival Guide. It features numerous nods to Romero’s original Dead trilogy (Night, Dawn of the Dead, and Day of the Dead) as well several little tips of the hat to Richard Matheson and his classic vampire tale I Am Legend. Overall, Mr. Esposito dreams up a tense, gory, and fresh spin on the zombie genre while barely stopping to take a breath. He puts the reader through the ringer with white-knuckle suspense and leaves us all wanting to see what comes next in the massive and wildly creative trilogy.