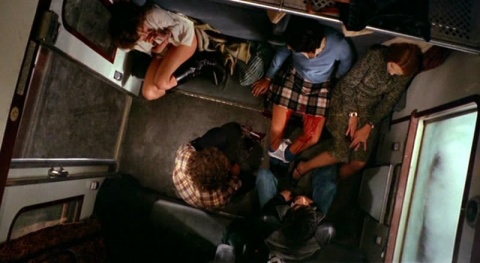 Imitation was the name of the game in Italy from the mid 1960s until the mid 1980s, something that was both positive and negative. Sergio Leone gave birth to the spaghetti western genre in the mid 60s with the marvelous A Fistful of Dollars, a leaner and meaner version of the American western, and Lucio Fulci sent Italy into a zombie craze with his uncompromisingly vicious 1979 grindhouse film Zombie, which was marketed as a sequel to George Romero’s mega hit Dawn of the Dead. It is no surprise that Italy was also enamored with Wes Craven’s grainy rape/revenge horror outing The Last House on the Left. Aldo Lado’s Night Train Murders is Italy’s answer to Craven’s horrifying redo of Ingmar Begrman’s The Virgin Spring, even marketed as the “new Last House” and using The Last House on the Left’s famous tagline, with minor alterations (“You can tell yourself it’s only a movie – but it won’t help”). Many have argued that Night Train Murders is actually a stronger and much more intelligent film than The Last House on the Left, but in reality, the film seems to be preoccupied with its graphic sexual assaults rather than really doing anything fresh or constructive with the story outside of some thin satire and a change in setting. It should also be pointed out that the film is poorly paced and (naturally) shoddily dubbed with eye-rolling dialogue. The only thing that saves the senseless clone is the acting, which is surprisingly strong for a controversial grindhouse throwaway.

Night Train Murders focuses on two pretty college girls, Margaret (Played by Irene Miracle) and Lisa (Played by Laura D’Angelo), who are taking an overnight train from Munich to Lisa’s parents home in Italy for Christmas. While on board, Margaret and Lisa cross paths with two thugs, Blackie (Played by Flavio Bucci) and Curly (Played by Gianfranco De Grassi), who hop aboard the train to avoid being arrested by the police. As they hide from the ticket collector, Blackie attempts to rape a pretty upper class woman (Played by Macha Meril), but is shocked that the woman begins seducing him and enjoying his advances. This promiscuous woman joins the two thugs on their journey, but the train is soon stopped after authorities get word of a bomb on board. The girls decide to hop on another train that guarantees they will reach their destination by morning and allow them to avoid the suspicious Blackie and Curly. As the girls settle in, they are shocked to discover that the two thugs and the woman who pursued them on the previous train are also on board. As night falls and the train cabins darken, Lisa and Margaret become the victims of rape and torture at the hands of Blackie, Curly, and the mysterious woman. As the night goes on, the girls begin to realize that no one is going to be able to save them and they begin wishing for death.

After the slow set up that hangs over the first act of Night Train Murders (the girls flirt with the thugs, Curly plays his harmonica, Blackie has graphic sex with the mysterious woman), director Lado settles in for almost forty minutes of graphic rape and jaw dropping torture that will certainly stir up the casual viewer, but frankly just exhaust the hardened horror buff. The initial first encounters during the lengthy rape sequence are certainly appalling (the deflowering with the switchblade comes to mind), but after a while, you are left checking your watch and wishing that Lado would move on with the story. When we do finally move past the nasty stuff, Lado seems to rush the confrontation between Lisa’s parents and these three sadistic individuals. If you are familiar with The Last House on the Left, you obviously know that the parents cross paths with the thugs and proceed to serve up a bloody plate of revenge. Night Train Murders approaches the sequence as almost an afterthought, and the way the parents figure out what has happened feels forced. When the sparks finally do fly, things do get bloody, but it never reaches the levels of violence that The Last House on the Left reaches. Amazingly, there is plenty of atmosphere during the final confrontation (the billowing fog and the whistling wind do send chills as Lado fixes his camera on a dead body), but the action feels a bit sanitized for a film that seems well aware that it is a knock-off exploitation film. It sadly never achieves the realism that Craven achieved. 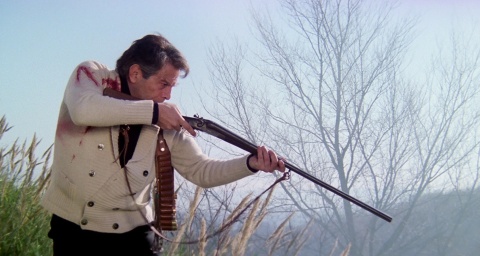 For an exploitation film, Night Train Murders does muster some above average performances from its leads. Miracle and D’Angelo are certainly sympathetic as Margaret and Lisa, especially when they realize that there is no hope of escape from these three maniacs. Especially effective is D’Angelo’s Lisa, a virgin who is violated with a switchblade and then left to bleed out. As far as the thugs go, Bucci and De Grassi will make your skin crawl as Blackie and Curly. One is just as bad as the other, the loose cannon easily being Curly, who happens to be an unpredictable junkie with a sinister harmonica. Meril’s mysterious woman (we never do learn her real name), who joins forces with Blackie and Curly, is probably the creepiest character in the film, a seemingly sophisticated upper class woman who conceals her darker interests in porno and smirks at the violence erupting around her in the final moments. It is frightening the way evil is lured out during an attempted rape, a horrific act that she enjoys. And we can’t forget Enrico Maria Salerno and Marina Berti as Lisa’s parents, Giulio and Laura, two more upper class citizens who erupt in quivering carnage even though they state their dislike for violence in society.

At times, Night Train Murders seems to have a bit more on its mind than simply rape and revenge, but the idea of violence lurking in the most civilized human beings seems stale and borrowed, much like the plot itself. The film is effective with its claustrophobic setting (very rarely does Lado’s camera venture out of the train cabin) and the image of a switchblade stuck between Lisa’s legs is certainly something that will not leave your memory any time soon, but the film never manages to sicken like it thinks it does. The middle section just becomes tedious and sadly, boredom begins to set in. It should also be noted that the film packs a beautiful and haunting score from Ennio Morricone, a nice little surprise for the viewer. Overall, if you’ve exhausted your copy of The Last House on the Left and you’ve admired Bergman’s staggering The Virgin Spring, Night Train Murders is worth checking out simply for the slightly different take on the story. However, if you’re an exploitation fan, Night Train Murders will leave you longing for the scummy realism of Craven’s film.

Night Train Murders is available on Blu-ray and DVD.