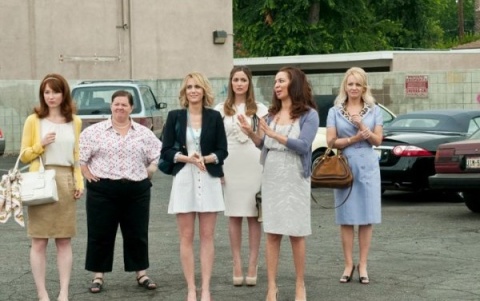 For those of you out there who were convinced that Judd Apatow was nothing but a sexist who made movies simply for immature males and about male tribulations have an argument no longer. Mr. Apatow and director Paul Feig have officially made a movie for females that tackle arduous female relationships with each other and themselves. To all the men out there who are writing Bridesmaids off as a “chick flick” need to suck it up and take the trip to pick up the Blu-ray because I guarantee you are going to laugh your ass off. Bridesmaids leaves the recent string of “bromance” films in its comedic dust and can proudly call itself one of the funniest movies since The 40 Year-Old Virgin. Much of its success lies on the slim shoulders of the comedienne in the center of all the pandemonium and that little lady is SNL alum Kristen Wiig. Wiig co-wrote the script with her pal Annie Mumolo and it is drenched in wicked shrewdness along with many other bodily fluids. Wiig also happens to prove to the suits out there that she can indeed carry a film and does not have to settle for the occasional cameo or background character. Her performance here is strikingly similar to what we saw from Steve Carell in The 40 Year-Old Virgin.

If one were to quickly glance at the title of this film and have no clue what the film is about, many would assume that it’s some new Kate Hudson bomb that follows her shallow quest to pull Matthew McConaughey for the fifth time. A disposable romantic comedy that presumes Hudson breaking a heel and falling down is comedic brilliance. The type of film that will last for about a month at the theater and then quickly make it’s way to DVD. It’s refreshing to see Wiig, who up until this film had not snagged herself a starring vehicle, a woman with pitch-perfect comedic timing step up to the plate to play Annie, a woman who has seemingly hit rock bottom. She is a victim of the recession as her bakery she started has been reduced to a boarded up graffiti wall. We also learn that her boyfriend picked up and ditched her after her bakery closed down. She spends her nights with a wealthy playboy (Played by a never better John Hamm) and spends her days paling around with her best friend Lillian (Played by another SNL alum and real life BFF Maya Rudolph). Annie complains to Lillian about her problems and figures she will always have a shoulder to lean on with her. That is until Lillian drops the bomb on Annie and proclaims that she is getting married. At the engagement party, Annie is introduced to the wildly colorful bridal party. She meets innocent Becca (Played by The Office’s Ellie Kemper), bored-housewife-with-a dark-side Rita (Played by Reno 911’s Wendi McLendon-Covey), the uber-confidant Megan (Played by scene-stealing Melissa McCarthy), and the wealthy and malicious Helen (played by Insidious star Rose Byrne). Annie finds herself pitted against Helen in the quest for maid of honor and hilariously self-destructs from the battle.

Wiig manages to play Annie not as a desperate-for-love caricature but as a wounded and vulnerable heroine. We root for her to, yes, find love but also to hold on to her best friend even as Annie and Lillian grow further and further apart. The universe has come crashing down on this poor soul and she is more desperate than ever to find a friend she can actually trust and does not come equipped with ulterior motives. Wiig also does the seemingly impossible task of making a horrific breakdown uproariously hilarious. There are scenes in this movie that will leave you howling with laughter and scenes that will have you wishing Annie was a real flesh-and-blood human you could give a big sympathetic hug and reassure her that everything will be okay. 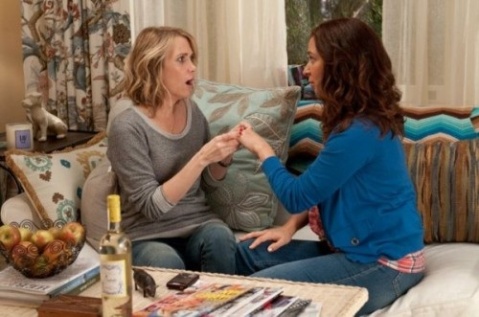 It is an absolute thrill to watch Wiig and Mumolo lob a rowdily unpredictable comedic sequence that begins subtle and erupts into full on chaos at the audience. A bridal gown fitting that ends with food poisoning will bring you to your knees with laughter and shrieking “Oh, my God!” and a prescription drugs and scotch fueled meltdown on a plane to Vegas tops anything that was found in the incredibly overrated Hangover in terms of shock comedy. Wiig’s physical comedy comes to a head as she suffers a nervous breakdown during a shower in Helen’s mansion and battles Helen’s excessive wealth and her ability to purchase friends by throwing down with a giant cookie. Wait until you see it. It should join the ranks as one of the funniest scenes in the history of comedy.

When you’re not recovering from the countless belly laughs (trust me, there are PLENTY!), there is a scene of hushed, sincere emotion that will leave you speechless. Ones that left the entire packed theater silent in the particular showing I attended way back in May. You could actually feel the heartbreak hovering in the room and it became almost painful to sit and watch. One scene finds Annie confronted by the chunky Megan that is the definition of powerful and uplifting. Or a scene that shows Annie telling her mother that things have gone from bad to worse that will tug your heartstrings until they snap. It will warm your heart when Annie begins to find love with a sensitive Irish cop Rhodes, played by the charismatic Chris O’Dowd. The film is a testament to what great script writing and great direction can do for a film.

The ladies of Bridesmaids manage to prove that they can party just as hard as the boys and leave the Wolfpack looking like a bunch of cubs. They are real, honest, and hugely likeable even when they are reduced to hot messes. The performances here are what make the film seem effortless and strangely protracted. Like all Apatow films, it drags on about twenty minutes too long, but you’ll be willing to overlook it mostly because it blindsides you with overwhelming emotion. From the male perspective, it was nice to sit on the sidelines this time around and let the film just wash over me. It’s going to dispatch women from the theater to debate about the mechanics of their relationships just as Apatow’s “bromance” films struck chords with men. Already a strong contender for the best comedy of the year, Bridesmaids needs to party it’s way to the top of your must-see list. Grade: B+

Bridesmaids is now available on Blu-ray and DVD.

It has become a custom for Hollywood to sneak a star-studded comedy into theaters during the last days of the summer movie season. It aims to lure in the remaining college and senior high school crowds who are looking to waste one of their last evenings of the summer. I will be the first to admit that I have started looking forward to these films, which include strokes of comedic brilliance like The 40 Year-Old Virgin, Funny People, Tropic Thunder, Superbad, and Pineapple Express. Each of these films is rambunctious in their own right and offered a much-needed break from the countless waves of CGI fakery. Plus, who doesn’t enjoy a good comedy to lighten the mood? This summer, we have Zombieland director Ruben Fleischer’s 30 Minutes or Less and it seems that the comedic spell that blesses all the said films above did not cast a spell on this star studded heist comedy. In fact, 30 Minutes or Less isn’t blessed with much at all. It’s just consistently repulsive and foul mouthed. To make matters worse, it squanders all the talent that is attached to it every step of the way. I kept getting the impression that the film was a hell of a lot of fun to make but sadly, we the audience aren’t allowed in on the action.

Perhaps it was the concept itself, which revolves around a loser pizza delivery guy named Nick (Played by the always welcome Jesse Eisenberg) who apparently enjoys getting high and slinging pizza for a living. He works for Vito’s Pizza, who guarantees you get your pie in thirty minutes or less. Nick shacks up with Chet (Played by the always welcome Aziz Ansari), a dorky grade school teacher who finds joy in online dating and playing Call of Duty. One evening after a spat between the nebbish best friends, Nick finds himself abducted by the loudmouthed Dwayne (Played by the deadpan Danny McBride) and his clueless partner in crime Travis (Played by the childlike oaf Nick Swardson). They strap a bomb to Nick and demand that he rob a bank. Dwayne and Travis need a hundred grand so they can pay a Mexican hit man to knock off Dwayne’s wealthy father and run off with the inheritance. Naturally, chaos ensues and we are bombarded for eighty-three minutes with one moldy joke after another.

30 Minutes or Less is a brief film and it benefits from refusing to let the nonsensical events drag out for longer than they have to. The irony to all of this is that the film is entirely too long and it could be executed in, well, thirty minutes or less. There is drawn out bickering that disguises itself as character development yet we could care less about any specific character. It forces in a frail love story and you would honestly forget it was even there if the film didn’t constantly keep reminding you about it. The film also crams in a bizarre side story for the senseless Mexican hit man with a lisp. He seems there just so the film will be over eighty minutes and get a theatrical run. McBride, who is usually welcome comic relief, spews stale and raunchy adlibs as if they are outtakes from his hit show Eastbound & Down. Eisenberg, Ansari, and Swardson all flail around in front of the camera desperately attempting to land a joke that works but nothing really stands out from any of them. It’s a disgrace, really, as all are quite talented. They are forced to try to top one another every step of the way. What makes the film an even bigger disappointment is that director Fleischer, who made the goofily self-aware Zombieland, demonstrates none of the wit he brandished with his previous film. It’s just piercing and irritate.

To give you an example of this movie going experience, when the film quieted down for a few seconds (trust me, it’s rare in this one), you could actually hear one audience member sawing logs. It had me checking the time to see how much longer I needed to sit through it. It only managed to draw a few remote laughs from the audience members that remained, as I saw at least two groups of people (apparently families) head for the exit early on. At least it had the sixteen year olds sitting next to me doubled over in laughter, because it barely drew a chuckle from me. Their eyes also almost popped out of their eye sockets at the gratuitous nudity the film offers at one point.

All in all, the film is unremarkable. It’s not flat out unpleasant like The Hangover Part II but it’s certainly an underachiever similarly to its main protagonist. I just sat wishing I could re-watch McBride in Pineapple Express, or Eisenberg in Zombieland, or Ansari in episodes of Parks & Recreation, or Swardson in Grandma’s Boy. The film doesn’t even attempt to be sweet natured in its more subdued moments, as that is what made those other later summer comedies go down easier. I have the sneaking suspicion that when 30 Minutes or Less departs from theaters, many will never remember it even existed. It’s a comedic misfire. Grade: D+