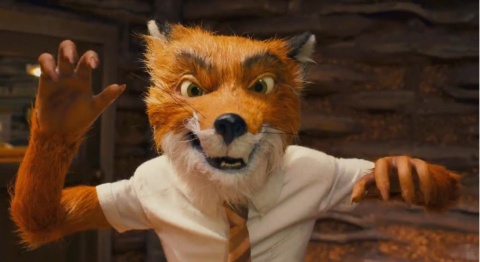 Totally sophisticated in most of his characteristics, Mr. Fox finds himself living in nature’s version of the suburbs after spending the majority of his foxhood stealing poultry and looting cider from the local farmers, Boggis, Bunce and Bean. In an effort to move up in the world and out of the fox hole his family began in, Mr. Fox buys a tree trunk for the family to move into—right across the valley from his old chicken thieving stomping grounds—and his old ways begin to haunt his instincts. The hardship of instinct versus the inclination to do what is right puts Mr. Fox, his family, and his friends in some compromising positions and Wes Anderson’s sixth film, Fantastic Mr. Fox (based on the original children’s text by Roald Dahl), not only tells the story of the secret lives of foxes, but builds yet another invitation only universe in which to entertain the endless details that create a classic Wes Anderson film.

So, Fox meets farmer, farmer has chickens, chickens get stolen, farmers get mad, Fox gets caught, farmer traces Fox to his residence, farmer does everything in his power to kill Fox.

This is the basic plot of Fantastic Mr. Fox, though if Wes Anderson has anything to do with it, the plot can be considered a bit more complex than that. In fact, Anderson makes it a habit in his films to show how complicated things can really become either by giving a character an inclination toward drawing maps or continually document, or expose early on in his films the tribulation that each of his characters bear. In The Royal Tenenbaums, for example, the audience is introduced to each character by Alec Baldwin’s monologue. The survey of personality traits gives the viewer all of the information that is needed to anticipate any combination of conflict between the characters, while in The Fantastic Mr. Fox, Anderson shows Mr. Fox himself as quite dexterous in the making of “master plans”.

The viewer is at that point given the essential plot out line and has become familiar with the players, leaving the imagination to begin piecing possibilities together, though you never can quite tell what Anderson has in store, even when the director gives you that essential information.

On that note, Fantastic Mr. Fox is complicated in plot and runs a good eighty-seven minutes, which is a whole lot longer than most want to sit through an animated film. Anderson’s twist on the story and the choice to use stop animation, though, is what drives the film. Voices like George Clooney, Owen Wilson, Bill Murray and Jason Schwartzman bring the familiar cynical tone to the characters that are popular in Anderson’s films, adding to the sophistication of the characters.

Important also to the film is the sense of humor these actors can bring to the characters. Often a scene that seems too sentimental or serious is broken by the true animalistic nature of each forest beast. Mr. Fox, wearing a suit with his hair all groomed does not hesitate to break a chicken’s neck with his teeth or growl and scratch when he doesn’t get along with someone. This is true for all of the characters and each one seems to have one of those moments in the film where they kind of just lose it and show what Mr. Fox calls the truth about himself, which is the fact that he is a wild animal.

The stop motion is incredible and crafty. Each creature has his own personae: Beaver, Beaver and Badger are attorneys, Kylie  (an opossum) is kind of like a superintendent, and so the list continues. But what is so stunning that the puppets are dressed to the nines, all throughout the film. Ash, Mr. Fox’s son, even wears layers and layers of clothes, all modified with holes for his tail and ears. The imagery is seamless and clean and the expressions of the characters are meaningful and distinct.

Everything from a toothy fox grin to the twitchy radar ears of a scavenger, Anderson and his stop motion team have taken a children’s story and mastered it into a film enjoyable to all ages. The tendency toward foul language is replaced simply by the word “cuss” and the only sign of alcohol or drug abuse is that of the Bean security rat living in a cider cellar, which is the cleanest we have seen Anderson yet, but also displaying some of his strongest creative moments.

2)  You get a run through of every character’s latin animal names…so it’s educational.

3)  Really the whole film is about eating.

4)  The Beach Boys dominate the soundtrack.

5)  The film can be used as a gateway to exposing your family and friends to other Anderson films.