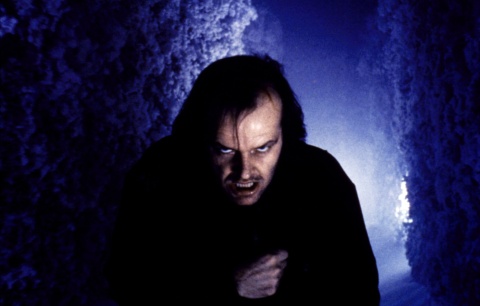 You never forget seeing The Shining for the first time. You never shake the images of a pair of young girls coaxing Danny to “come play” with them. Or how about Jack crashing a ghost party and plotting with a dead waiter on how to dispose of his shining son? One of my favorites is the looping shot of a sea of blood pouring out of an elevator door that slowly opens. The walls and halls will run red with blood, murder, insanity, and terror. And “Heeeerrrreeees JOHNNY”? In many ways, The Shining is the definitive haunted house film, one that Stephen King criticized for not following his famed story line for line. Under the obsessive and perfectionist direction of one of the greatest directors to ever make films, Stanley Kubrick constructs and delivers a labyrinth of bone-rattling images and a slow burn narrative that will stay with you even if it does not follow the horror author’s epic tale. It will freeze your blood.

The greatness of The Shining is often overshadowed by the iconic performance from Jack Nicholson, who checks in to the Overlook Hotel as Jack Torrence, who on the surface appears to be a content family man, a teacher and writer who is exhaustively searching for inspiration on a new project. He applies to be the caretaker for the said hotel, tickled by the idea of complete seclusion. Churning below the surface is a raging alcoholic who has hurt his young song Danny (Played by Danny Lloyd) in the past after a night of heavy drinking. Jack’s loyal, cooing wife Wendy (Played by Shelley Duvall) also accompanies Jack to the hotel, rendered breathless by the natural beauty of the structure, which is also said to be built on an Indian burial ground. In the job interview, Jack is informed that there have been ghostly encounters in the lush hotel and a few years previous, another caretaker seemed to snap from cabin fever and went on a killing rampage, chopping up his two young daughters and his wife, then proceeding to stick a shotgun in his mouth and blow his own head off. Jack waves off the story, but soon after arriving, Danny has a telepathic conversation with the head chef of the Overlook, Dick Hallorann (Played by Scatman Crothers). Dick explains to Danny the significance of this gift, called “shining” and explains to him that he is also sensitive to the paranormal. As the family stays the harsh winter in the hotel, Jack begins to slowly loose his grip on reality and he begins to embrace the anger that lurks inside of him. The ghostly apparitions also start making themselves known, terrorizing Danny at every turn. As the winter storm howls outside, Wendy begins devising a plan to get Danny and herself to safety, away from dangerous Jack who seems to want to join insidious ghosts who reside at the Overlook.

When watching a film by Kubrick, it’s easy to recognize that Kubrick himself is in complete control of what we are seeing. Every shot has been labored over and has been methodically illustrated, seeing only what we are meant to see, and it signifies something, sometimes that thing is only known by Kubrick himself. Sometimes the shot seems to be a psychological photograph; sometimes it’s dabbling with the surreal. Whatever the shot is, it is always orderly. There never seems to be input from any other individual. It’s strictly Kubrick’s mind at play. The surreal order is creepy in itself, suggesting normalcy, but it’s the ghostly visions that pack the icy punch. They are the grotesque, unseen side to order. Take the scene in room 237, where a nude woman emerges from the bathtub and embraces Jack. The bathroom posses a clean, grounded look, only strange because of it’s uncanny color scheme. She waltzes toward him and kisses the deranged Jack. When he glances at the mirror, he sees the beautiful woman is actually a rotting corpse of an old woman cackling at Jack’s horror. Kubrick suggests here and throughout The Shining that normalcy is always mirrored by unpredictable horror. There are two sides to everything. What we perceive as common and what stares back unseen. 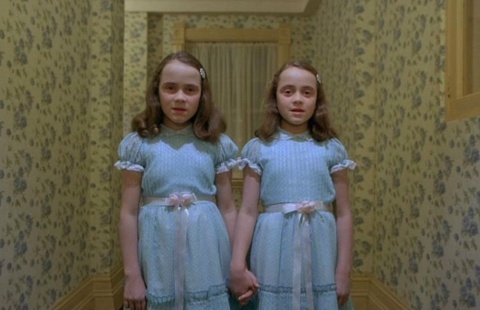 What we are really here for is the terror, and yes, we could deconstruct Kubrick’s nightmare all day, debating what everything means. The film will cause a few sleepless nights the way Kubrick springs terrifying visions on the viewer. Sometimes, he only shows us a terrified face, eyes bulging, rolling back in the head, accompanied by blasting rattles and shrieking musical blasts. It’s jump scares without being cheap. We don’t expect it, but Kubrick isn’t interested in simply startling us. While watching a documentary on the making of the recent horror film Insidious, James Wan discusses his use of jump scares in his film, arguing that while the film is heavily reliant on this technique to frighten, the way he applies it is always followed through. There is no gotcha moment or hollow spook. A ghostly visit, a strange specter, or any other apparition that creeps us out always accompanies the blast of music. There is never the fake scare where someone’s boyfriend jumps from behind a corner, doorway, etc. Part of me thinks he lifted this technique from Kubrick, who always blindsides us with an unnerving image. Two little girls block Danny from riding his big wheel through the twisting halls of the Overlook. There is a sudden flash of the girls dead in the same hallway with blood splattered all over the walls. You can’t argue that Kubrick surprised and then followed through.

The Shining is also bloodcurdling because of Nicholson’s ranting, flailing performance. He’s all unhinged grins and bogus reassurance that he doesn’t want to hurt Wendy; he just wants to bash her brains in! Talk about making every hair on your body stand at attention. He lumbers through the hallways, dragging an axe and hacking at doors to locate and chop up Wendy. Danny, in a trance-like state wields a knife and writes REDRUM on doorways. The fright comes from every angle as Wendy desperately attempts to hold everything together. Pretend everything is normal! But how can you when your son croaks, “REDRUM” and shows you a glimmering blade? The film climaxes in an iced over chase through a fogged hedge maze that, once again, mirrors the characters journey through the Overlook structure. It’s a maze of panic, madness, and bereavement.

The Shining makes exquisite use of its secluded location, promising no way out for the characters that inhabit it. The twist ending also promises to give the viewer the willies while turning the wheels of the brain. It’s an obsessive nightmare that is perfect to watch on Halloween. It has it all: deranged killers, ghosts, ghouls, corpses, and more. It’s Kubrick’s funhouse after all, and boy can he construct a house of horrors. He proved that he could do every genre and do it professionally and with confident expertise. A classic of the genre, massively influential, and a must-see for Nicholson’s performance, The Shining is a true, visionary work of art. It stands as a psychological puzzle that may never be solved and that is rewarding on multiple viewings. It reveals more and more each time you sit through it. That is filmmaking at its finest. Ranking as one of the scariest movies I have ever seen, The Shining is as warped and chic as horror gets. Grade: A+