Last night, cinema fanatics, fashionistas, and celebrity gossip gurus tuned in to the 69th Annual Golden Globe awards eager for the lax, unbuttoned atmosphere the awards show is known for. I for one was excited to see what host Ricky Gervais would unleash upon the hoards of celebrities that showed up for a few glasses of champagne and to bullshit with one another. What we were treated to was a lukewarm show that for the most part failed to entertain its viewers and had a handful of winners that were even less dazzling. It didn’t help that the Hollywood Foreign Press ignored films that SHOULD have been nominated. Seriously, where the hell was Drive, Tinker Tailor Soldier Spy, and The Girl with the Dragon Tattoo? Instead, we watched as the silent French film The Artist, a film that has yet to receive a wide release and mainstream audiences have not seen, cleaned house and Meryl Streep was handed ANOTHER award for The Iron Lady, another film NOBODY has seen. Can you say yawn inducing?

The show looked bleak from the get go. Uninteresting films, mediocre performances, and a slacking awards season were mostly to blame for the bland show. But it was infuriating to watch as Drive, a blood-soaked art house thriller that managed to be multilayered and boast a handful of stellar performances was waved off. It was nice to see Albert Brooks get a nod for his sinister performance of a gangster with the shortest temper known to man and a thing for stabbing forks into eye sockets but what about Ryan Gosling? Gosling had a nod for his suave turn in Crazy Stupid Love but his Drive performance was the one to talk about. And furthermore, what about Cliff Martinez’s retro score for the film? The soundtrack climbed the iTunes charts, had everyone who saw the film buzzing about it, and was the epitome of cool. Despite glowing reviews, the film was noticeably absent from the show.

Another film that was overlooked in the Best Motion Picture-Drama section was The Girl with the Dragon Tattoo, a bold and unflinching serial killer thriller that, despite the lengthy runtime, was a chilly adult mystery. Instead, The Ides of March filled a spot just so more people could line up to kiss George Clooney’s ass. Mara received a nod for her jaw dropping performance and we watched as the award was handed (naturally) to Meryl Streep. Streep has won three other times! There was also the absence of Fincher in the Best Director category, his spot filled by Clooney. I would have been content if Fincher OR Drive director Nicolas Winding Refn had filled the spot. At least they had the good sense to give Martin Scorsese the award for the wonderful Hugo.

Another glaring omission was Gary Oldman’s performance in Tinker Tailor Soldier Spy. Oldman displayed grace, restraint, and eyes that were filled with heartbreak. The film may not have been one of the best films of the year but it was also loaded with expert performances. Toby Jones, Tom Hardy, and Colin Firth could have also nabbed a supporting actor slot. And am I the only one who loved Sasha Baron Cohen in Hugo? He was a villain who worked his way into our hearts, even if he did get a bit lost in all the action of that film. 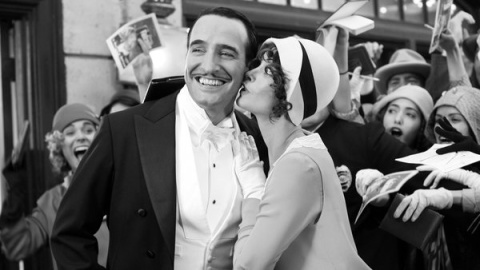 Most of my disappointment comes from the sweep by The Artist, a film that Hollywood seems reluctant to give a wide release but has been subtly generating buzz throughout 2011. My suspicion is that they assume there most likely isn’t a wide audience for this type of film but they have showered it in awards and praise. Critics have placed it at the top of their Best of 2011 lists and raved about it since early last year. Lets see what the fuss is about! Even if I had absolutely no interest in silent films, I would want to know why everyone is giddy with it. Do not take this as I’m downing the film before I see it. Oh no, I’m excited to see this French gem but come on, a wide release before the Golden Globes would have been nice.

Overall, it was a major disappointment to see Gervais pulling punches with his hosting. I expected there to be a few more cringe worthy comments from the British funnyman. It was nice to see Scorsese make off with the directing award and it was great to see Woody Allen snag the screenplay award for Midnight in Paris. It was a nice welcome back for Woody. Streep and Clooney grabbing up the Best Actor and Best Actress awards came as absolutely no surprise whatsoever. I still have yet to see The Descendants so I cannot comment on its win of Best Picture-Drama. There is no one to blame but myself for not having taken a trip to the theater to see it. As a big fan of The Adventures of Tintin, I cheered when Spielberg accepted the award for Best Animated Picture. There was really no competition as there was a disturbing lack of quality animated films last year.

I certainly hope that the Academy Awards embraces some of the films that the Globes overlooked. The problem with last night was there was no hold your breath moment. There seems to be no competition like last year’s battle between The Social Network and The King’s Speech. I doubt that Drive will get a Best Picture or Best Director nod when nominations are announced but I could be wrong. Maybe it was the lack of excitement throughout the season but I hope that there is a spark of life in the next few weeks and that we can finally get to see The Artist so that when it cleans up at the Oscars, we can actually be familiar with it.

Let us know what you thought of the 69th Annual Golden Globes by voting in our poll attached below or leaving us a comment! We’d love to hear from you.