Who doesn’t love a good revenge flick? How about some revenge served up from a bunch of voodoo zombies? If revenge at the hands of zombies sounds like a good time to you, check out Sugar Hill, one of the most unique grind house/exploitation/blaxploitation films I have ever seen. Mind you, Sugar Hill isn’t the type of zombie film where the ghouls shuffle about the swamp and chew on human flesh at random. No, Sugar Hill’s zombies suddenly appear, wearing bulging silver eyes, covered in cobwebs, and stalking their victims with machetes and what not. They also have a puppet master, two to be exact, who commands them to slay their victims. A so-so little mash up of a horror film mixed with a gangster picture, Sugar Hill doesn’t really scare you or gross you out, its just absurd and partly amusing. The problem is the film dries up about half way through and begins to be a bit wearisome.

After the murder of her affectionate boyfriend at the hands of some white gangsters, Diana ‘Sugar’ Hill (Played by Marki Bey) looks to a voodoo queen named Mama Maitresse (Played by Zara Cully), who conjures up the Baron Zamedi (Played by Don Pedro Colley), the Lord of the Dead, and his army of undead killers. Sugar asks Baron Zamedi to aid her in her quest to avenge the death of her boyfriend. He agrees and they begin tracking down the gangsters who have wronged her, each one meeting a nasty end at the hands of his undead hit men. As the bodies pile up, a local cop named Valentine (Played by Richard Lawson) begins to suspect there may be more to the murders than just a simple gang war. As he gathers more evidence, he begins to suspect Sugar and the supernatural may have something to do with the bizarre slayings.

Sugar Hill is the only feature film to be directed by Paul Maslansky, the man who acted as producer of such films as Raw Meat, Police Academy, and Return to Oz (What a variety, huh?). Maslansky directs Sugar Hill cautiously, limiting himself when it comes to the gore and butchery, ending up with a surprisingly conservative film. For a ridiculous zombie exploitation film, the film has very little carnage for the violence-hungry viewer. The film does touch on every trait that makes up the blaxploitation film including hit men, gangsters, racial slurs, white antagonists, and using the South as a backdrop. The film also explains that the undead hit men are the preserved bodies of slaves brought to America from Guinea. This is perhaps the only thought provoking aspect of Sugar Hill, undead slaves rising from the graves and knocking off vicious white men, but the film never attempts to elaborate on this aspect. 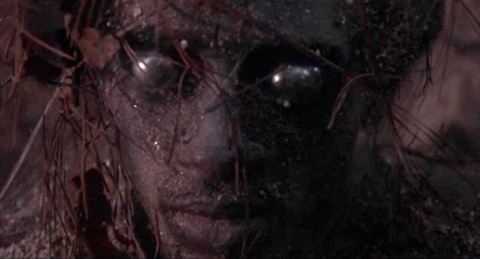 Sugar Hill does have some above average performances for such a goofy mash up of a film. Credit should go to Marki Bey and Don Pedro Colley, both who seem to be having a lot of fun playing with monsters. I did root for Bey and her I’m-not-gonna-take-it-anymore attitude. She is sometimes a bit soft for a swirling ball of fury but you can’t help but root for her when she drops a gangster into a pen with a slew of hungry pigs and bellows, “I hope they’re into white trash!” Don Pedro Colley laps up his role as Baron Zamedi, giggling through such lines of dialogue like, “Perhaps a drink on the house, sir. My particular special, a drink that I’m famous for… The ZOMBIE!” He sometimes sounds like a southern, African American version of Bela Lugosi as Dracula, especially when two ghostly brides accompany him. He’s camp wearing gold teeth and black smudges around his eyes to let the audience know he’s dead. It’s Bey and Colley that add a little bit of flavor to a mostly bland film experience.

And what about those zombies? The zombies are the coolest part of Sugar Hill, popping up like ghouls in a fun house, grinning wildly as they stare at their target. The unsettling touch of bulging silver eyes are the most terrifying part of Sugar Hill, giving the ghouls an alien-like effect. The zombies are hilariously slathered in make-up that attempts to make them look bony and emaciated, but they look like they should be in a Day of the Dead parade. Half the time, it is impossible to really see what they do to their victims and they mostly just stare at a shuddering gangster. One poor sap meets his end during a spooky massage (Death by massage! Now THAT is a first!!) while another is forced to stab himself to death when a voodoo doll catches fire, a death the zombies had barely anything to do with. You can’t help but get the feeling that sometimes the zombies are in the frame because Maslansky thought they looked cool.

Don’t look to Sugar Hill for a really deep experience. The film has fun with itself at times (A severed chicken leg trying to murder a baddie!) but is ultimately too flat too often. Sugar Hill becomes an early example that the mixing of two drastically different film genres is not always the wisest decision. Sure, it takes some confidence to really believe in your premise and I will give the filmmakers credit for attempting something different, but the zombie genre and blaxploitation genre go together like oil and water. I’m always game for a bloody revenge flick especially if it is an hour and a half of absurdly bloody retribution. Sadly, Sugar Hill never really lets loose.