Who doesn’t want a little Peter Bark for their Thursday? Here is the trailer for the sleazy 1981 Italian zombie movie Burial Ground: The Nights of Terror, directed by Andrea Bianchi. 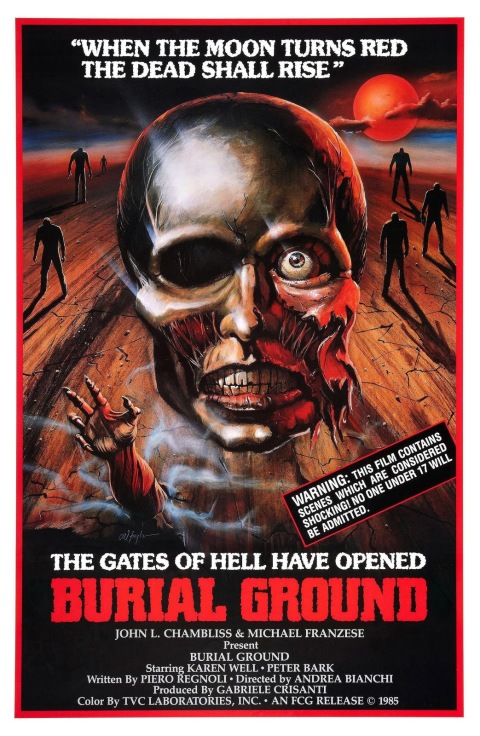 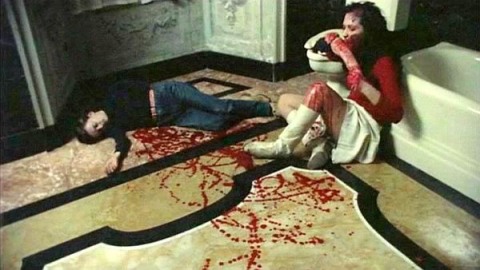 In the wake of George A. Romero’s zombie masterpiece Dawn of the Dead and Lucio Fulci’s surprise smash imitation Zombie, the walking dead became all the rage in Italy during the late 70s and early 80s. While most of these films were made on the cheap and focused heavily on gratuitous violence, there was still a few that managed to be pretty entertaining and stand out from the bunch. Perhaps the most warped of these standouts is exploitation director Andrea Bianchi’s Burial Ground: The Nights of Terror. Plot-less, artless, and wildly perverted, Burial Ground has climbed the cult classic ranks mostly due to the presence of Peter Bark, a 25-year-old dwarf that is onboard here as a young boy named Michael, who is sexually attracted to his own mother. This relationship certainly trumps every other “eww” factor in the film, but Bianchi has a few more tricks up his sleeve to shock and repulse. Burial Ground wastes absolutely no time jumping into the exploitation action, beginning with a little sex and nudity and then launching itself headfirst into non-stop gut munching. Those searching for a zombie film with a biting social commentary mixed in with the shuffling undead hordes better start looking elsewhere. This sucker is all about grossing you out.

Burial Ground begins with the bearded Professor Ayres snooping around ancient Etruscan catacombs near his home. As he investigates the catacombs, he accidentally sets off a mysterious device that unleashes a horde of shuffling ghouls that proceed to eat him up. A few miles away, three couples, Leslie (Played by Antonella Antinori) and James (Played by Simone Mattioli), Mark (Played by Gianluigi Chirizzi) and Janet (Played by Karin Well), and George (Played by Roberto Caporali) and Evelyn (Played by Mariangela Barbieri), arrive at Ayres’s mansion for a relaxing getaway. Also among the group is Evelyn’s young son Michael (Played by Peter Bark), a creepy little kid with a huge crush on his “mama.” Shortly after the group arrives, they all engage in a little afternoon delight and then they all take to the mansion grounds to do a bit of exploring. While taking in the idyllic scenery, the couples come face to face with the walking dead that have been unleashed by Professor Ayres. Terrified and confused, the group retreats to the mansion and begins boarding up all the windows and doors, but as day turns to night, the zombies reveal that they are not as mindless as the group initially thought and that they are actually very resourceful.

Right from the get-go, it is obvious that Burial Ground is more interested in spilling blood than giving any sort of clear explanation as to how exactly Professor Ayres woke these Etruscan cannibals up or why they are cursed to walk the earth as these monsters. Bianchi asks us to simply accept it and embrace the film for what it is—a cheap exploitation movie. The best part of the entire film is the zombies, which all wear some seriously nasty and detailed make-up. Much like the ghouls of Fulci’s celebrated Zombie, these zombies have worms dangling from empty eye sockets, jagged teeth protruding through their rotten lips, exposed bones, maggots slowly crawling out of gashes, and yellowish blood oozing from gunshots wounds. When they finally catch up to their victims, they rip their stomachs open and pull out a seemingly endless string of entrails. We are then treated to extreme close-ups of the decayed zombies chewing on various body parts as skin-crawling sound effects echo on the soundtrack. Unlike Fulci’s zombies, these undead nightmares don’t just rely on their bony hands and discolored fangs to get to their victims and rip them apart. These ghouls raid the gardening shack and pick up various weapons including axes, pitchforks, knives, and even a scythe to use on their meals. There is one eerie scene that finds the mansion maid sticking her head out of one of the mansion’s windows and getting her head chopped off by some scythe-wielding ghouls, who then all greedily grab for their blood treat. This particular scene is about as terrifying as Burial Ground gets. 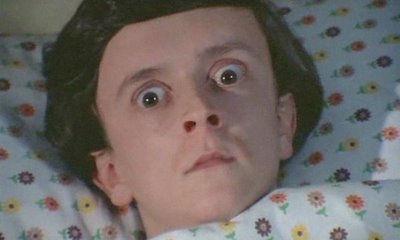 What really puts a bullet in the head of Burial Ground is the absolutely atrocious acting from nearly everyone who steps foot in front of the camera. The only two performers who really stick in the viewers mind are Bark as the Oedipal Michael and Barbieri as his sexed-up mother Evelyn. The adult Bark is absolutely hilarious and downright unsettling playing a child that is maybe eleven or twelve years old. He slinks around the mansion and bursts in on his mother and George as they have passionate sex. His mother’s response upon seeing Michael is to leap out of bed and barely cover herself in front of her bug-eyed son as he calls out “mama!” As if Bark wasn’t weird enough, Bianchi then dubs the man-child with a voice that sounds like an adult attempting to sound like a little kid. Over the course of the film, Michael’s relationship with his mother gets more and more bizarre as he reaches up her skirt and tries to expose her breasts during a zombie attack. If those scenes don’t have your jaw on the floor, Bianchi has one final shock for you in the final moments of the film. If ever there was an image that would burn itself into your brain and haunt your dreams for the rest of your life, it is this one. If you’re wondering why the 25-year-old dwarf Bark was cast as a child, Italian law stated that a child could not be cast in a film that featured such graphic content.

If it weren’t for the incestuous subplot between Michael and Evelyn, Burial Ground certainly would not have the rabid fan base that it does today. Sure the gore and make-up effects are solid but they alone would never have carried the film off into the land of cult classics. As if the lousy acting and poor plot weren’t enough to bring the film down, Bianchi approaches the project as if he could care less about it. The camera is almost always at a stand still and offering up a poorly lit and grainy medium shot of the action. It is clear that a good majority of the film’s budget went to the zombie make-up and gore effects and you can’t really blame Bianchi for wanting to show them off, but after a while, you get the impression that he is just filling out the runtime. Surprisingly, Bianchi does choose a dark path at the end, but he shoots himself in the foot when he stamps a quote over the final image of the film that is riddled with spelling errors. Overall, Burial Ground tries desperately to play to its audience and there are a few moments that are mildly entertaining, but as far as Italian zombie knock-offs go, you’re better off sticking with a Fulci zombie film.

Burial Ground: The Nights of Terror is available on DVD.