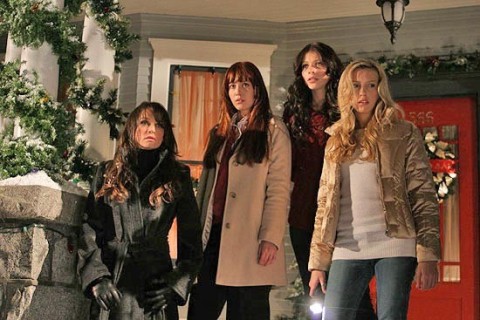 Bob Clark’s original Black Christmas is a freaky, freaky movie. Seriously, watch it all by yourself and try not to get creeped out as a slew of sorority sisters are stalked and murdered by an unseen killer all while ethereal Christmas carols play faintly in the background. It is no surprise that Hollywood would get the idea that the film was in desperate need of a redo and then proceed to screw it up royally. Enter director Glen Morgan’s cheap and tasteless 2006 pulp explosion that completely misses what made the original Black Christmas such a spooky little title. Sure, the original Black Christmas contained a little gore here and there, but it relied on atmosphere, getting under our skin with the idea that evil could be lurking anywhere and strike at any moment. Plus, it also featured some pretty good acting (Margot Kidder!), which was another positive. Black Christmas 2006 opts for outrageous shocks, glaringly fake gore, and some truly awful acting (Seriously, what the hell is Mary Elizabeth Winstead doing here?!). Morgan’s monstrosity should really be viewed as an insult considering that Clark’s Black Christmas predated John Carpenter’s legendary 1978 slasher Halloween and deserves credit for shaping the slasher subgenre. These kids just don’t get it!

On a snowy Christmas Eve night, the girls of the Alpha Kappa Gamma sorority house are all preparing themselves for Christmas day. Apparently, most of them don’t have any family to go home to. It turns out that the Alpha Kappa Gamma house used to be the home of Billy Lenz (Played by Robert Mann), a boy who suffered from a liver disorder that caused his skin to be yellow. Billy was loved by his father but despised by his mother and one night, Billy catches his mother and her boyfriend killing his loving father. If this wasn’t traumatizing enough, they then lock Billy away in the attic and his mother proceeds to sexually abuse him. She ends up getting pregnant and giving birth to a girl, Agnes (Played by Dean Friss), who is the apple of her eye. One day, Billy snaps and finds a way to get out of the attic. He then proceeds to murder his mother and eat her. In present day, Billy executes a daring escape from the mental institution he is locked away in and he returns to his childhood home to massacre the sorority sisters staying there. As the girls mysteriously disappear and perverted phone calls terrorize the girls, it is up to Kelli (Played by Katie Cassidy), her suspicious local boyfriend Kyle (Played by Oliver Hudson), and Leigh (Played by Kristen Cloke), the half-sister of one of the missing girls, to get the bottom of the mysterious disappearances and gruesome murders.

With subtly and the sinister slow build long gone, Black Christmas 2006 dives head first into a comic book aesthetic that is bathed in flashing multicolored lights and relentless self-aware violence. Morgan is all about being gross and graphic without ever paying tribute to the restraint of the original film. About the only thing he gets right is the plastic bag used to suffocate the victims but even that gets worn out about twenty minutes in. If suffocating his victims wasn’t enough, he then has his yellow skinned Billy, who looks like he belongs in Robert Rodriguez’s Sin City, chop off the heads of his victims and remove their eyeballs, which he then uses as ornaments on his Christmas tree. And we can’t forget the cannibalism that has been worked into just to make things more sick and twisted. There are only a few moments where Morgan applies the voyeuristic camera work that Clark used but when Morgan does it, it seems like it is just a laughable excuse to show one of his pretty actresses nude. He also can’t seem to leave the gratuitous sex scenes alone and he shoves one after another on us. One character watches a porn video on her computer while a flashback sequence shows Billy’s hideous mother and her boyfriend going to town on each other only to follow that up with her molesting Billy moments after. After a while, I just wanted it all to stop.

Then we have the atrocious acting, which unsurprisingly never rises about very average. Cassidy’s Kelli is absolutely awful as the main heroine, mostly because there is very little development with her character, which makes it very hard to root for her. She is just suddenly being terrorized and that is all there is to it. Hudson is a joke as Kyle, the meathead boyfriend of Kelli who walks around with an ominous smile plastered across his face for most of the movie. It’s like he is begging to be a suspect even though we know he isn’t the killer (He has yellow skin, you morons!). Cloke’s Leigh arrives late to this stabbathon looking for her half-sister, who bites the dust earlier in the film. She teams up with Kelli but both just run around screaming and making one stupid decision after another. The rest of the girls all blend in to the background, cliché characters designed to be hacked up in the most brutal ways possible. The only one that really stands out is Mary Elizabeth Winstead as Heather. She’s the only scream queen here who really knows what she is doing and even she seems a little embarassed. As far as Mann’s Billy is concerned, he just darts around in the shadows and stares bug-eyed at his victims. He certainly doesn’t anything new or exciting with his character.

At a skimpy eighty minutes, Black Christmas 2006 feels entirely too long and too short at the same time. It seems to be dragging its feet in places, especially when the girls sit around and complain about Christmas or listen horrified at the story of Billy Lenz. Then there are the flashbacks that build Billy’s backstory, which are more interested in being repulsive than providing a good scare. There is a last act twist that we can see coming a mile away and when it hits, it seems to make absolutely no sense whatsoever. Probably the only thing that one can like in the film is the nifty little nod to Clark’s other holiday classic A Christmas Story. In one scene, we can clearly see the Old Man’s leg lamp glowing proudly in the darkness. Overall, Black Christmas 2006 is another throwaway remake for the MTV generation; the ones who just can’t seem to sit patiently and enjoy a good, clever scare. It has to be a strobe light of senseless gore, loud fake-out scares, and pretty faces to keep them occupied. I hope Santa delivers a lump of coal to Morgan for this rotten remake.

Black Christmas 2006 is available of Blu-ray and DVD.