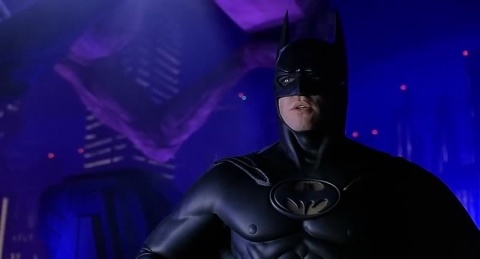 After Tim Burton took Batman to the darkest depths of evil’s soul in 1992’s Batman Returns, Warner Bros. wanted to make the Batman franchise friendlier to families all over America (No death to children here!). With Burton out of the director’s chair and wearing the producer’s hat, Joel Schumacher steps in to brighten the mood, yanking the brooding Batman out of the shadows and tossing him head first into a world of neon lights and rubber nipples on the Batsuit. Schumacher’s Batman Forever, the third installment in the franchise, was without question the grandest Batman film to date. It sprints all over this art deco Gotham City that looks more like a nightclub than an actual metropolis. Some of the dark tones of the original two films remain loosely in tact and newcomer Val Kilmer, who steps in for Michael Keaton, refuses to quit brooding as Bruce Wayne, but the film welcomes in two campy villains, an annoying sidekick, and a homoerotic feel that turns Batman and his antagonists into glam rock drag queens with no purpose or direction. Completely reversing the plot to create a darker Batman, Schumacher takes things back to the campy 60’s television series that starred Adam West as a much more cartoonish version of the Dark Knight and in the process, he horrifies Batfans everywhere.

Batman Forever begins with the dreaded Harvey Dent/Two-Face (Played by Tommy Lee Jones), the former do-gooder D.A. of Gotham City, terrorizing the good citizens of the sprawling city. He blames Batman (Played by Val Kilmer) for not intervening in a courtroom accident that left half of his face horribly scarred. Two-Face soon finds an ally in the rubbery terrorist Edward Nygma/The Riddler (Played by Jim Carrey), a disgruntled former employee of Wayne Enterprises who is out to stick it to his idol, Bruce Wayne. The Riddler devises a way to suck the secrets out of the heads of the helpless citizens of Gotham, which allows him to get inside Batman’s mind and figure out his true identity. Meanwhile, Bruce Wayne has assumed responsibility for the young Dick Grayson (Played by Chris O’Donnell), who watched helplessly as his parents were murdered by the bloodthirsty Two-Face. As Dick spends more and more time in Wayne Manor, he begins to suspect that Wayne is hiding something and he is determined to find out what that secret is. As The Riddler and Two-Face close in on the city, Bruce Wayne begins to grapple with his true identity, leading him to consider hanging up the cape for good.

In the past, I have criticized Burton’s Batman films for not exploring the psychology of Bruce Wayne and what drives him to dress up like a giant bat. Schumacher’s Batman Forever attempts to wrap its head around why Bruce does this and while I admire the effort, it is shoddy and half-hearted. Bruce is urged by love interest Dr. Chase Meridian (Played by Nicole Kidman) to face down his demons, which leads to a handful of moody flashbacks that are ripe with the darkness of the first two films. Unfortunately, a good majority of this side plot was removed from Batman Forever due to the studio’s fear of venturing back into the dark side of Batman. This is just one of the missed opportunities in Batman Forever. There are tons of moments that appear to be going in the right direction but are thrown off by studio interference. Many are quick to place ALL the blame on Schumacher, labeling him the only person responsible for Batman crumbling to glittery ash, but I think Warner Bros. also played a part in this monstrosity. I was always hesitant to put all of the blame on him because you will catch glimpses of the film that Schumacher wanted to make. There are some bleak touches to be found if you are willing to look closely, something that saves Batman Forever from being a total turd. 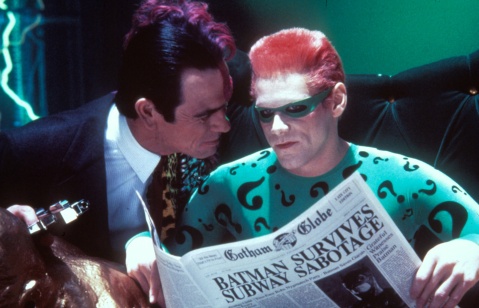 Another positive that Batman Forever has working in its favor is the casting of Val Kilmer as Bruce Wayne/Batman. Kilmer continues to play Wayne with a straight face, refusing to stop and wink at the audience even when Schumacher slaps nipples on his armor. When he puts on the Batsuit, Kilmer communicates in a whisper that does seem perfect for a guy dressing up like a giant bat, which softens the blow of campy lines of dialogue like, “I’ll get drive-thru.” Things really hit rock bottom for Kilmer when he is forced to team up with O’Donnell’s Robin, who does nothing to lift the creeping veil of camp that is slowly draping over the film. Schumacher also hints at a homosexual spark between the two crime fighters, which would be okay if the previous two films had hinted that Bruce grapples with his sexuality but that isn’t the case here. Kilmer is forced to morph the brooding hero, who has had feelings for Vicki Vale and Selina Kyle in the past, into a bisexual with an identity crisis. It’s a bizarre touch to throw into the series in the third quarter but Kilmer keeps a cool head with the murky twist.

To make things worse for Batman Forever, O’Donnell has no clue how to approach the Boy Wonder. At times, he wants to be just as brooding and dark as Kilmer’s Bruce Wayne and at others, he wants to be a party-boy rebel without a real cause. I had mixed feelings about his character but he really rubbed me the wrong way when he jacked the Batmobile and takes it out for a joyride. Personally, I could have done without the inclusion of Robin, as I personally have never been a huge fan of the character. Then we have the two villains, both who lift the buffoonery of Nicholson’s Joker but forget the measured menace that made his character so unforgettable. When Carrey isn’t on the screen with him, Jones actually knows how to handle his split-personality wacko but whenever the question-mark-clad Carrey enters the scene, the two seem like they are in a contest to see who can out-camp the other. Carrey wins the contest and turns the Riddler into a heavily caffeinated version of the Joker who loves one-liners and loves light-up jackets. Jones and Carrey do an admirable job with the material they are given, but I wish they weren’t asked to act like they are two giddy teenagers. Matching Kilmer’s somber tone is Nicole Kidman’s sexy psychologist (a fitting love interest for this film), who is here to coax the demons out of Wayne. Also back is Michael Gough as the faithful butler Alfred, who contributes another quality performance, and Pat Hingle as Commissioner Gordon, who once again has absolutely nothing to do with his iconic character.

As I stated earlier, Batman Forever was the biggest Batman film at the time and Schumacher loads it with enough action to live up to that reputation. The film does have some marvelous sets even if they do turn Batman Forever into a gigantic neon dance club. The fight scenes lack the brutality of Batman and Batman Returns, at times seeming like the characters are dance fighting (It wouldn’t surprise me if they were) rather than actually fighting for their lives. Schumacher and his crew hope to overwhelm us with action and eye candy so that we won’t notice the fact that the film basically has no plot and they almost succeed. Luckily, Kilmer is a nice fit for Batman and it is a shame he didn’t stick around to elaborate on his performance, but I can’t say I blame him for abandoning the character when the studio is more interested in selling toys rather than making something coherent. Overall, Batman Forever is a regressive film that appeals more to kids than it does to the adult viewers looking for something substantial and weighty. Oh well, at least there wasn’t any “Wham” or “Pow” to speak of, which was a relief for a film that hits the ground with a campy joke about Batman stopping for drive-thru.

Batman Forever is available on Blu-ray and DVD.