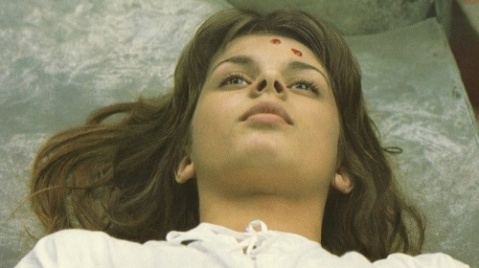 If you took Reagan from The Exorcist, the demon children from Earserhead, Rosemary’s Baby and It’s Alive, and the chanting score from The Omen, mixed all of them up with Christopher Lee, you’d have 1976’s To the Devil a Daughter, Hammer Film Productions’ last venture into the realm of supernatural terror. Probably best known for dialogue clips that were used on heavy metal band White Zombie’s Astro Creep: 2000 album and for a sequence where then 17-year-old star Nastassja Kinski treats us all to the most awkward full frontal nude scene ever put on screen, To the Devil a Daughter isn’t one of the best productions that Hammer ever delivered to horror gurus but it certainly isn’t the worst from the British horror company. Based on the novel by Dennis Wheatley, director Peter Sykes thinks his film is a high art offering within the demonic horror realm but what he doesn’t seem to pick up on is the fact that he is basically making a veiled exploitation film knock off of The Exorcist with only a small handful of effective scares. The film is pretty gross, delusional, convoluted, and, at times, borderline pornographic but it still manages to paint a number of jarring images to make it worthwhile for anyone who fancies a bloody horror flick. Just make sure you go in with a notebook so you can jot notes down because the plotline here is an absolute mess.

To the Devil a Daughter introduces us to Catherine Beddows (Played by Nastassja Kinski), who believes she has been raised in a Christian convent called “The Children of the Lord.” It turns out that this convent is actually a satanic coven, which is led by the sinister Fr. Michael Rayner (Played by Christopher Lee), created for the worship of Astaroth. On the day that Catherine was born, her father, Henry (Played by Denholm Elliott), made a deal with Rayner that would allow him to give Catherine over to Astaroth on her eighteenth birthday. Now filled with fear and regret, Henry seeks out the help of occult writer John Verney (Played by Richard Widmark), who may be the only one who knows who to protect Catherine from Rayner and his associates. As Catherine’s behavior grows more and more bizarre, Verney begins to suspect that he is dealing with some very dangerous and determined people. Soon, the bizarre events turn into grisly murder and horrific hallucinations, leading Verney to brush up on his knowledge of Astaroth and prepare himself for a battle with Rayner.

Vaguely creepy and ever so slightly off-putting, To the Devil a Daughter never really flat out terrifies you like say Rosemary’s Baby or The Exorcist but it does have a fair share of impressive moments. Still, the film is thrown off by some poor pacing and a head scratching final showdown between Rayner and Verney, a scene that you expect to be more of a nail biter than it actually is. Throughout the film, Catherine suffers hallucinations of a strange, Eraserhead/It’s Alive-like fetus that is covered in red slime and looks sort of like an alien, another creepy addition but one that is never fully developed so we understand just what the hell it’s supposed to be. The film also suffers from some unintentional humor in certain spots, especially a scene where an ally of Verney’s is killed and Verney’s only response is “DAMN YOU” before passing out. To make things even worse, the film has one of the messiest scripts that you will ever come across, half the film making zero sense at all. It is frustrating because when the film shows some coherency, it is actually a pretty eerie demonic horror offering, one that could have edged its way to the front of the demonic horror pack. There is also the random orgy thrown in to the middle of the movie, another strange flashback/hallucination/repressed memory that has Christopher Lee stripping down his birthday suit while frantic editing shows us graphic sex scenes. Well, The Exorcist never had the balls to throw that at us!

I can say that despite the number of flaws to be found in To the Devil a Daughter, the acting is outstanding, a shocker considering this material. Christopher Lee is just the right amount of wicked as Rayner, a gentleman with a razor-sharp edge of evil. Lee was always game to do whatever was asked of him in the Hammer horror films and in this offering, it is no different. Lee’s Rayner is pitted against Widmark’s Verney, a sly and informed hero who needs to be one step ahead of his demonic enemy. It has been said that Widmark was difficult to work with on set and that he loathed this production but you would never guess by his performance. He is always top notch and nothing less, even when he has to battle a demonic windstorm with nothing but a rock. Then there is Kinski as Catherine, an innocent but erratic force in the middle of the film. One moment, she is a whispery and naïve child but the next moment, she is a howling banshee who is a witness to pure evil. Denholm Elliott is superb as a wounded father who has no one else to turn to. The end of the film frames him as a withering soul seeking shelter in a chalk pentagram. Anthony Valentine and Honor Blackman also nab honorable mentions as David and Anna, friends of Verney who end up aiding him in his quest to stop Rayner.

While I have sounded like I really disliked To the Devil a Daughter, there are several scenes that made the hair on the back of my neck stand at attention. A scene where a rope is dangled over a phone to get a character to hallucinate a snake coiled around their hand was pretty effective and the film also has one hell of an unnerving suicide scene. The most shocking comes when a woman, who is about to give birth, has her legs bound together so the demon seed can claw its way through her belly (yes, you read that correctly). It was easily the most intense sequence of the film and without question the most unforgettable. Another creepy moment comes when Catherine, who is caught in a murderous trance, wanders the streets of London as people who pass look on in bewilderment at her bizarre behavior. The film also has some wonderful gothic structures to marvel at and compliment the supernatural events. Still, the messy screenplay, convoluted plot, and the trippy end battle leave quite a bit to be desired. As far as the climax is concerned, I still have a hard to believing that the forces of evil could be vanquished with a rock. Overall, if you are a Hammer horror enthusiast or one who really gets the willies from demonic horror films (I know there are those of you who really fear this stuff), To the Devil a Daughter is a horror film that you shouldn’t miss. The rest of us will be re-watching The Exorcist, Rosemary’s Baby, and The Omen and when we get sick of those, maybe we will join you.

To the Devil a Daughter is available on DVD.