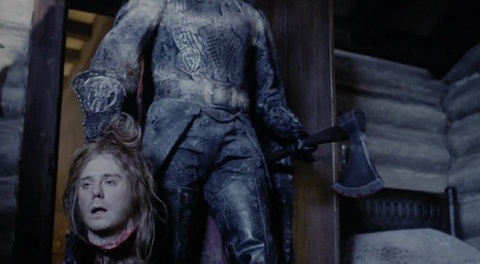 After the magic that was captured in 1990’s Edward Scissorhands and 1994’s Ed Wood, the bar was set mighty high for the third collaboration between auteur Tim Burton and actor Johnny Depp. This third collaboration happened to be a big screen interpretation of Sleepy Hollow, a bulked up and bloodied version of Washington Irving’s short story The Legend of Sleepy Hollow that was first published in 1820. Burton’s Sleepy Hollow is a foggy, gothic vision that has faint echoes of a classic Universal Studios monster movie and a squeamish version of Ichabod Crane slinking away from the dreaded Headless Horseman. Working with a screenplay by Andrew Kevin Walker, Burton’s Sleepy Hollow becomes a slightly convoluted but beautifully photographed thriller that lacks any substantial freak-outs. Sleepy Hollow ends up being rescued by Depp’s portrayal of Ichabod Crane, who in Burton’s film is a nebbish but practical New York City police constable rather than a skittish and superstitious schoolmaster like he was in Irving’s story. Depp adds some real pizzazz to a film that is all visual panache and very little humanity.

Sleepy Hollow finds queasy New York City police constable Ichabod Crane (Played by Johnny Depp) sent by his superiors to investigate a handful of gruesome murders in the isolated and superstitious town of Sleepy Hollow. Upon his arrival, Crane meets with a slew of locals who are taken aback by his new and experimental techniques that he plans to apply to catching what he assumes is a flesh and blood murderer. The nervous townspeople whisper tales of a headless apparition rising from the grave and riding through the night to severe the heads of anyone who gets in his path. As the investigation continues, Crane begins to realize that maybe the ghost stories that are on everyone’s lips may not be just stories afterall. Crane teams up with a local orphan Young Masbath (Played by Marc Pickering) and the pretty Katrina Van Tassel (Played by Christina Ricci), daughter of wealthy local farmer and head of Sleepy Hollow Baltus Van Tassel (Played by Michael Gambon). The trio begins to suspect that maybe the murders that are taking place are not as random as they first appeared to be.

Sleepy Hollow is loaded with brittle and foggy detailed sets that seem like they would have been at home in the Universal Studios monster movies of years past. The film also has some pedantic costume design that really adds to the visual punch. The set and costume design are complimented by the moody chiaroscuro cinematography from Emmanuel Lubezki, which at times borders on black and white, further fueling the classic horror movie feel of the film. Burton seamlessly edits sequences that had to have been shot on jaw-dropping sets with actual landscapes, creating a dead and gothic landscape, one of the most vivid of his entire career. This gorgeous detail is what allows Sleepy Hollow to keep its head above water rather than sinking due to the overly complicated storyline that Burton slowly and inconsistently reveals. Sleepy Hollow almost falls victim to style over substance but luckily Johnny Depp is willing to come to the rescue. 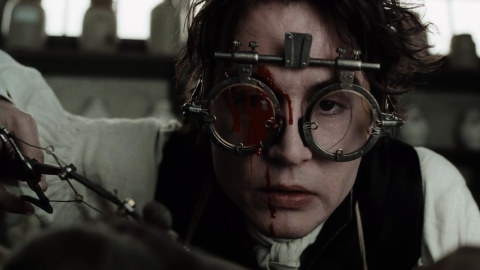 Depp single handedly gives Sleepy Hollow the soul that it so desperately needs. Depp’s Crane is a peculiar individual, the furthest thing from a manly man and one enamored with science. He cringes at the bloody crime scenes and gasps at the site of a spider but he enjoys slapping on a bizarre pair of goggles to play detective. Depp’s Crane can be viewed as an outsider throughout Sleepy Hollow, a man who wishes to make a change in police work but is consistently waved off by his superiors and finds the residents of Sleepy Hollow cocking their heads and squinting their faces when he goes off on a tirade. While Depp soars, many of the background players fall flat. His leading lady Christina Ricci isn’t given anything to do but gasp and faint every time she lays eyes on the Horseman. Miranda Richardson as Lady Van Tassel really gets to let loose at the end but some of the dialogue she is given is iffy. Christopher Walken as the Horseman is an inspired choice for the role but when we see his back-story and all he does is grunt, much of your excitement over his presence deflates. Supporting roles are filled by familiar Burton actors like Lisa Marie, Michael Gough, and Jeffrey Jones who are there simply because they know Burton and they probably owed him a favor. Ian McDiarmid and Christopher Lee also pop up in small roles but they are rarely seen and seem to be there simply to add more star power to the credits.

By the end of the film, Burton’s vision falls victim to a clunky script that ends in a rush of confusing explanations about what has been going on beneath all the supernatural carnage. Sleepy Hollow does however end with a very cool nod to James Whale’s Frankenstein despite the fact that it is as subtle as an exploding windmill. While there are some adjustments made to help the film expand into a feature length film, the storyline isn’t properly balanced out and it attempts to cram too much into the last fifteen minutes. Considering this is Sleepy Hollow and is a classic story around Halloween, the film could have benefitted from a few solid scares here and there. There are tense moments but there is nothing that will have you covering your eyes and sleeping with a nightlight on. This film does happen to be one of the bloodiest films that Burton has ever made, boasting some truly amazing gore effects that spew candle wax-like blood. Overall, Burton is the only director I can see tackling a project like Sleepy Hollow and he does do a damn fine job visually, offering up moments of staggering beauty. Depp is his usual top notch self but Burton ends up leaning on him to heavily to carry all the extra weight in the film. Despite its flaws, there is still a moderate amount of moody and atmospheric fun to be had in Sleepy Hollow, allowing it to be an above average film, but I wish this had been about a little more than just mood and atmospherics.

Sleepy Hollow is now available on Blu-ray and DVD.