Your Choice for Best Picture… GO! 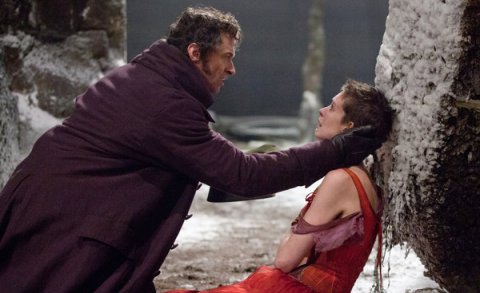 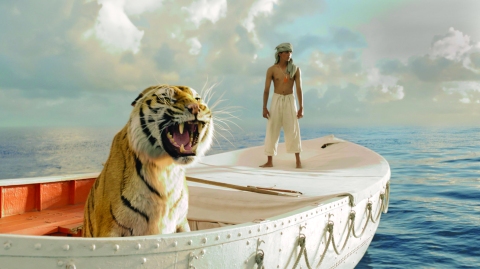 If James Cameron’s day-glo spectacle Avatar had you longing for another visually immersive event movie, then you need to run, not walk, to Ang Lee’s shipwrecked epic Life of Pi. Based on Yann Martel’s 2001 novel of the same name, many fans of the book argued that the story would never transfer properly to the big screen but we all know that will never stop Hollywood from trying. There is no argument that Lee’s Life of Pi has plenty of emotional force and spiritual weight behind all the dazzling visuals and eye-popping 3D but the major problem with the film is that it does seem to loose its way more than a few times. At slightly over two hours, Life of Pi does get a bit long in the tooth, especially when the film trades the dry land whimsicality for Pi’s soggy Pacific adventure. Still, Life of Pi has plenty of cutesy humor, young love, religious curiosity, and tough life lessons worked into the first half of the film to shape the towering second half. Despite boredom setting in here and there, you can’t ever take you eyes off of star Suraj Sharma and his growling travel buddy, Richard Parker, a savage Bengal tiger eager to claim their little slice of lifeboat heaven for himself. It is a joy to watch these two try to establish a mutual trust so they can work together and ultimately be saved.

Life of Pi begins in the present with a Canadian writer (Played by Rafe Spall) approaching Indian immigrant Piscine Molitor “Pi” Patel (Played by Irfan Khan) about an incredible story that would make a great book and make him believe in God. Pi agrees to share his story, which begins in Pondicherry, with how he got his unusual name (he’s named after a swimming pool in France) and how he got his nickname Pi (he gets sick of being called “Pissing” Patel by his classmates). Pi also dives into how he became interested in religion (he follows THREE religions) and how his family owned a local zoo that contained a Bengal tiger named Richard Parker. At the age of sixteen, Pi (Played by Suraj Sharma) and his family decide to close up their zoo and move to Canada. They board the Japanese freighter Tsimtsum along with their family of animals and they settle in for what they assume will be a relatively smooth journey. Shortly after setting out, the ship encounters a terrible storm and Pi’s entire family is killed as the ship sinks. Pi manages to find his way into a lifeboat but a zebra, an orangutan, a hyena, and Richard Parker soon join him. All alone and fearing for his life, Pi has to learn to work together with his wild travel buddies and hold on to his faith in face of the impossible.

Considering that a majority of Life of Pi is set in a lifeboat, one could assume that the film would get awfully dry very fast. How do you keep the viewer hooked and entertained visually? Lee seems to understand this so he crafts a number of hallucinatory sequences that boast Avatar’s neon glow and 3D that expands Pi’s watery environment. Near the end of the film, Pi stumbles upon an island that is paradise by day for the hungry and thirsty traveler and then a glowing Hell in the same vein of Pandora by night. The island is inhabited by armies of meerkats, who munch on the algae and roots in the sunshine but dash into the trees when the sun sets to avoid the acid that takes the place of the fresh water. Even Richard Parker can sense that something is off in this island that may or may not exist. Then there are the moments where Pi’s boat drifts silently over smooth waters that reflect the starry sky above. It would seem that Pi is floating through the stars. And we can’t forget the humor from David Magee’s screenplay, which infuses a little more pep in Life of Pi’s step. The crown jewel is the scene in which Pi tries to establish territory on the boat using urine. Of course, Richard Parker doesn’t take kindly to this and proceeds to pee on Pi.

Life of Pi is basically a one-man show in the acting department. Sharma is incredible as the crafty Pi, who has to figure out a way to keep away from his ferocious travel buddy. Lee allows him to pepper in some physical comedy as well as play with his faith to give his performance a powerful punch. He did move me when he shouts at the sky in a storm, demanding to know what else God wants from him. We share in his joy when he catches a massive fish and feel his disappointment when he spots a ship far in the distance ignoring his flares and sailing the opposite direction. You may even fight back a tear when Pi attempts to grieve for his dead family but he doesn’t get much time to properly mourn. In the present, Pi is portrayed by Khan, who is basically the storyteller and boy, does he sell it. His tear jerking final moments will floor you. Spall’s writer is there just to move the story along and to act as a Ryan Reynolds lookalike (Maybe Reynolds was too busy?). Tabu is another stand out as Pi’s loving mother, Gita Patel, who is tickled by Pi’s curiosity in religion. Adil Hussain leaves a mark as Pi’s strict but wise father, Santosh Patel. And we can’t forget Richard Parker, a mostly CGI creation but one that really seems to be flesh, hair and blood. The relationship that builds between him and Pi is wondrous.

While I hate to criticize Life of Pi for loosing my interest in a few parts, I feel as though a film should hold me every single second it is on the screen. I should be wrapped up in every single moment, big and small, but sadly, there were parts where I found myself drifting out of Pi’s adventure. No matter how much spectacle Lee threw my way, I wanted the story to progress and at times I felt as though it wasn’t. I did enjoy the out-of-left-field twist at the end, which does leave a lump in the viewer’s throat. I also really liked Pi’s mini pit stop on that seriously astonishing island. If you are planning on checking out Life of Pi on strictly an entertainment level, you are going to be broadsided by how heavy the film gets at points. The film makes the bold claim that by the end of this story, you will believe in God. Whether it accomplishes this task is completely up to you but I wasn’t necessarily swelling with faith by the end credits. Overall, like a moth to a light, you can’t help but be drawn to it’s idea that even when facing impossible odds, hope will deliver you through it. It will also be very hard to resist Lee’s marvelous direction (I smell a Best Director nomination) but at over two hours, Life of Pi is a bit bloated. It may not rank at Lee’s best film but Life of Pi is certainly a rousing and tender work of art that will have a heavy presence come awards time.