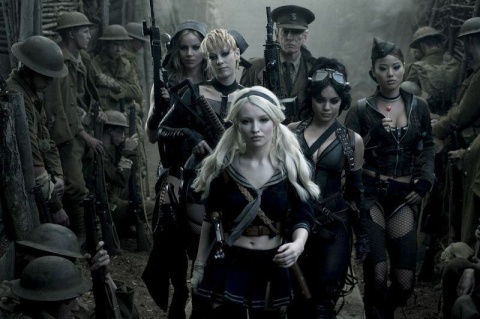 After all the gun smoke had cleared and the credits crawled across the screen, it became crystal clear to me how Christopher Nolan settled on Zack Snyder for the reboot of Superman: Snyder simply showed him Sucker Punch. There’s absolutely no doubt in my mind that Nolan gushed over it either. Sucker Punch is a trippy puzzler that sends you stumbling from the theater to debate what the hell just happened with your friends, which is quite similar to what Nolan did with his towering Inception. But where Inception pulled off it’s elusiveness with refined sophistication, Sucker Punch takes the dirty, dusty road where dragons swoop from above, girls in fishnets wield 50 calibers, WWI zombie German soldiers leap from trenches, and our heroes bop around in a WWII bomber. And that is just naming a few of the oddities that Snyder lobbed into his obvious pet project. I’m sure by this point you’ve seen the other reviews of Sucker Punch and, to use a term from Mr. Obama, the film has taken quite a “shellacking.” Sure it’s big, loud, and completely overblown, but I oddly found myself enjoying the madness. What actually appalls me is that Battle: Los Angeles, a film that makes no attempt to be about anything except blowing everything up, actually received better reviews than this film did! ARE YOU KIDDING ME?!?! Did we see the same movie?

Maybe I was rooting for Snyder to actually pull off the impossible. Everyone under the sun has seen the unruly trailer. Snyder seemed like he wanted to shove every possible genre of film into one film to make one hulking masterpiece. One that encompasses everything from the kung-fu films to epic medieval fantasies. I truly found Sucker Punch to be a noble, and at times, refreshing attempt at it even if it was beginning to show signs of collapsing on itself. The film also has had a slight hypnotic affect over me in the sense that I am confident that there is more to this particular film than first meets the eye. The first time seems to be a shock and awe campaign to pin you to your seat but the more my mind wanders back and evaluates the little touches, the more I’m lured into wanting to uncover more about it.

I won’t dive to deeply into the plot of the film because some of it is up to you to piece together, but the film follows the starry-eyed, pig-tailed Babydoll (played by Emily Browning), who is admitted into a mental institution by her unhinged stepfather after she accidentally shoots her baby sister. It’s here that she falls under the care of the at times menacing and at times motherly but always vampy Dr. Gorski (played by Carla Gugino). Behind the walls of the institition, she embraces her new life in a brothel and learns to dance for the seedy men that come to drool over the young girls. Babydoll soon joins forces with the tough-as-nails leader Sweet Pea (played by Abbie Cornish), Sweet Pea’s gung-ho little sister Rocket (played by Jenna Malone), the uneasy “pilot” Amber (played by Jamie Chung), and the big guns specialist Blondie (played by Vanessa Hudgens). The gang rapidly starts plotting an escape from the institution/brothel and through their wildly untamed imaginations, envision elaborate dream-missions to find the supplies they need to break out of the big house.

While the film marvelously finds a perfect balance between the hectic dream worlds and the rotting walls of the institution, the film tries to cram so much in that points are a little to overpowering. There is an incredibly inspired sequence that takes place on a WWI battle field complete with zombified German soldiers wearing ghastly gasmasks, biplanes falling in flaming ruin from the sky, earth shaking explosions and a lofty android walker with a rabbit face that Amber maneuvers into a outrageously bad ass death machine. It’s a truly breathtaking action sequence that is worth the trip to see the movie alone. Sadly, the film stumbles when it ventures into the realm of medieval fantasy in a war sequence that smashes WWII together with the Lord of the Rings. I give it credit for being atypical but it’s shockingly monotonous and lacking in any sort of looming danger. This leads me to my next compliant, which is the fact that all the girls are magically scrappy superheroes. There is never any concrete justification and we are supposed to just embrace it. One sequence that is especially irritating is when Babydoll confronts three giant samurais. She flips through the air so repeatedly that I almost wanted to shout “ENOUGH ALREADY! WE GET IT!”

Ultimately, Sucker Punch overcomes the obstacles and still manages to be engaging. I still found myself consumed by much of it and the writing, although uneven, is never less than interesting. The dialogue is good but not great and the premise alone never lost me. The performances’ by the young actresses are finely tuned and convincing. I was extremely worried that they would be wooden. The standout is without question the wounded Rocket. She kicks ass while nursing the burden of a broken heart. I actually breathed a huge sigh of relief that the film never descended into a perverse fantasy for Snyder. While the girls are adorned in fishnets and lingerie, the film is surprisingly tame. We never get a glimpse of the burlesque dance sequences and instead are substituted with the dream world. An even bigger relief is that the film counters Snyder’s fixation with masculine heroes. I enjoyed the girl power feel that he explores this time around. It’s more substantial than his homoerotic bloodbath 300. It still comes in third to his colorful Dawn of the Dead remake and spacey adaptation of graphic novel juggernaut Watchmen. On top of it, Snyder further refines his coarse camerawork and his fluid montages of slow motion into real time. It all flows so gorgeously and it’s impossible not to eat it all up.

The aspect that truly wounds Sucker Punch is the ending where, like Watchmen, it crams all of it’s “profound” ideas in a brushed over climax that feels curiously unsatisfying. This is where the film truly flat lines. It piles on nonsensically cryptic monologues on top of some obvious visual symbolism. The film is convinced that it is a fine wine that will be savored as the taste sticks in your mouth. Unfortunately, it’s just a high-end, calorie-loaded beer that is surprisingly tasty in the beginning. A taste that you and your buddies exclaim about for the first few sips but when you reach the bottom of the bottle, you just gulp down the last drops to finish it. It wasn’t as refreshing as the first few half but it wasn’t impossible to polish off. You’ll oddly find yourself wanting to experience it all again to peel back some more layers and it will make for some good conversation in the long run.

Sucker Punch is now available on Blu-ray and DVD.