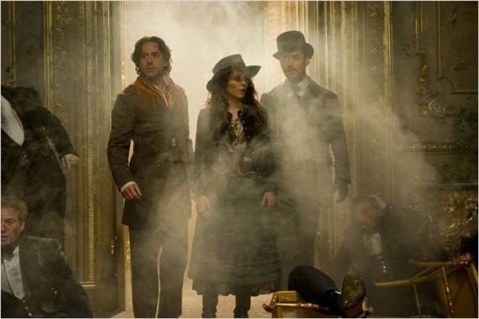 Did you miss him? Robert Downey Jr.’s motor-mouthed brawler/detective Sherlock Holmes blasts his way back into theaters and the people are flocking to his latest case. While I found myself smitten with Downey Jr.’s magnetic performance during the first case, I found the events swirling around him too tortuous. I understand what British director Guy Ritchie is trying to achieve, which is to put us in Holmes’ rutty boots and work along side him in racing the clock and solving the diabolical plot. Yet Sherlock Holmes: A Game of Shadows gets tangled up in its own reveals, twists, turns, and fake-outs. I found myself backtracking to pinpoint which character Holmes and Jude Law’s Dr. Watson were chattering on about. Do not interpret this as me saying the film was over my head, but I just wish these movies would slow down for a minute and let me catch up before it dashes off again. The film leaves you mentally exhausted. I suppose that the modish action sequences are there to let us rest our brains, but Ritchie goes above and beyond the normal slam-bang intensity that is rampaging through action films of late. He stages some of the most rousing action sequences of the year, with precise slow-motion halts to give us a clear glimpse of the bone snapping action. It’s exhilarating and you can’t peel your eyes from it. So much for a second to catch my breath.

After a string of seemingly unrelated crimes throughout Europe, the peculiar detective Holmes (Played by Downey Jr.) suspects that there is more to these strange events than meets the eye. He begins applying his usual unorthodox detective work and enlists the help of the less-than-patient Dr. John Watson (Played by Law) to aid him in discovering the truth. The trail leads them to Professor James Moriarty (Played by Jared Harris), a genius that can match Holmes every step of the way. As Holmes tries to piece together what all these crimes are leading up to, he crosses paths with a dagger-throwing gypsy named Sim (Played by Noomi Rapace), who is the next target of Moriarty. Sim proves to be useful in aiding Holmes and Dr. Watson in figuring out what Moriarty’s plot is, which turns out to be more destructive than Holmes could have ever imagined.

I don’t really want to dive into many more details about the plot of the second entry to the Sherlock Holmes franchise; the slow reveals of this one prove to be a hell of a lot more interesting than the first installment. A Game of Shadows benefits from a much better villain, one who can go toe-to-toe with Holmes both in a fight and in brains too. The film does have some incredibly exhaustive art direction, featuring some lavish costumes, realistic CGI, and some sets that are to die for. It maintains the steam-punk industrial aesthetic that Ritchie established with the first film. Yet my qualm about Holmes stems from its overly busy inner workings, mostly in the plot department. Everyone speaks in a thick British accent and rambles on about characters that are hard to remember. Trust me, there are a TON of characters so I would advise you bring a notebook to scribble them all down in. The film also moves at a breakneck speed that left me wishing I could just have a brief intermission and review everything that had just happened before piling on more plot points. This one will leave you exhausted but I commend its unremitting energy. 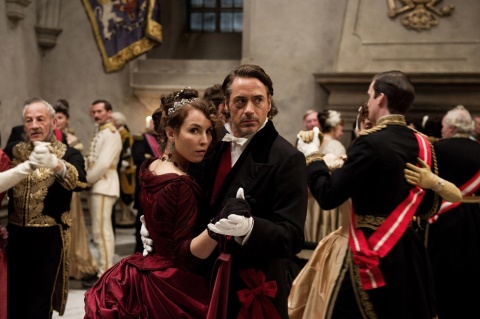 The one aspect that I love about Sherlock Holmes is the driven, fanatical performance from Downey Jr. I think he may be a bit sharper with Holmes than he is with Tony Stark, a role many love a bit more than Holmes. Credit should be given to his spot-on and rich British accent that pours effortlessly through his mumbling mouth. He sometimes comes off as a ranting lunatic that would seem more at home in a straightjacket rather than an overcoat and bowler cap. He’s unpredictable (He shows up on a train dressed as a woman), brash, and poised in every move he makes. When at one point he admits he made a mistake and lives are lost, we feel his distress in himself. It’s only one of two times we see a crack in his self-assured manner. Law’s Dr. Watson acts as the voice of reason when Holmes goes on a brain-frying rampage. Law also has perfect comedic timing to Downey Jr.’s deadpan delivery. Truth is, their relationship is given room to grow and evolve here. We get to see their affection for one another. They are an odd couple but, hey, opposites attract right?

Moriarty is a memorable villain, one who spits his words out with vitriol to spare. He truly does have a diabolical plot and I love his final moments with Holmes. Harris look like he had a good time playing evil. Rachel McAdams returns for a brief cameo as Adler, one that seems a little bit pointless, as she wasn’t in the original all that much. Rapace, for all the celebration around her performance in the Swedish film version of The Girl with the Dragon Tattoo seems to just be a pretty face stuck between Law and Downey Jr.’s stubbly faces. I would have liked to see more range from her, as all Ritchie has her doing is running from bullets, hitmen, and cannonballs. Stephen Fry turns up as Mycroft, Sherlock’s posh brother who is just as deadpan and batty as the good detective.

As someone who is always rallying for more intellectual blockbusters, I have to hand it to Sherlock Holmes: A Game of Shadows. It refuses to dumb itself down too much, even if it is just escapist fluff. If there is another Sherlock Holmes, and I’m sure there will be, I would love to see the screenwriter shave things down a little bit and I’d love for Ritchie to ease up on the pace. Don’t be in such a rush to push Holmes through the case, as I enjoy watching him tick. I’ll definitely have thirds on the relationship between Holmes and Dr. Watson, as that acts as the heart and soul for this franchise. The action should also be noted, as it turns out to be much more epic the second time around. Just wait until you see the gunfight between Holmes, Sim, and Watson against a gang of German soldiers. All I will say is that it involves stellar slow-motion effects and a gun named Little Hansel. Funnier than the original, a bit more straight forward (Just slightly!), with style and energy to burn, Sherlock Holmes: A Game of Shadows is the ideal thrill ride to distract you from all those Christmas presents you still have to buy. 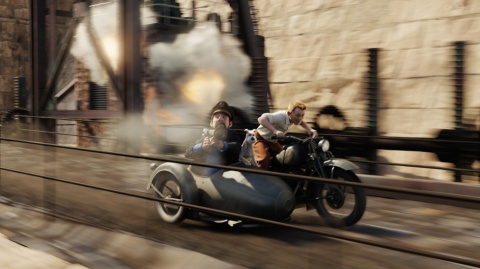