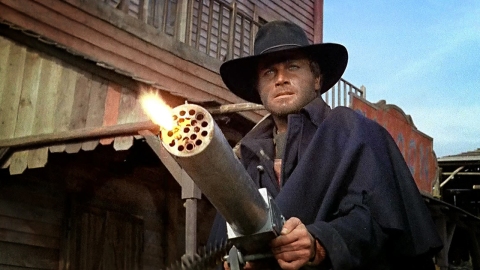 After the success of Sergio Leone’s violent 1964 spaghetti western A Fistful of Dollars, a whole slew of Italian directors scrambled to emulate Leone’s reinvention of the western. While many of the spaghetti westerns that were made in the wake of A Fistful of Dollars were overlooked or forgotten, some managed to recruit a following and for good reason. In 1966, director Sergio Corbucci released Django, which really sent Europe into a western frenzy and at the time happened to be the most violent film every made. By today’s standards, Django is rather tame aside from a certain scene featuring a man having his ear sliced off and then fed to him, but it still manages to get the adrenaline following for an hour and a half. Along with Leone’s Man with No Name trilogy (A Fistful of Dollars, For a Few Dollars More, The Good, The Bad, and the Ugly), Django stands as a shining example of the spaghetti western and one of the more fun exploitation films out there. It does have some shoddy craftsmanship in places (the dubbing leaves a lot to be desired, the cinematography is so grainy that the picture almost flashes at certain points, the music is a bit cheesy in places) but you can honestly say you’ve never seen a western quite like it. If the reckless violence and bad attitude don’t lure you in, wait until you get a load of Franco Nero’s brooding gunslinger Django, a nasty piece of work that tugs a mud-caked coffin behind him that conceals one hell of a deadly weapon. He almost looks like he stepped out of the coolest comic book you’ve never read.

After saving a prostitute named Maria (Played by Loredana Nusciak) from two bloodthirsty gangs, former Union soldier turned gun-slinging drifter Django (Played by Franco Nero) takes Maria under his wing and leads her to a nearby border town that is largely abandoned. Behind him, Django drags a mysterious coffin that he never lets out of his sight. Django and Maria take shelter at the town brothel, which happens to be the haunt of the two gangs that Django saved Maria from. It turns out that the two gangs, one being a KKK style cult led by Major Jackson (Played by Eduardo Fajardo) and the other being a trigger-happy gang of Mexican banditos led by General Hugo Rodriguez (Played by José Bódalo), are locked in a battle for the dying town and Django has unfinished business with the heads of both gangs. After a nasty confrontation with Maj. Jackson’s men, Django teams up with Gen. Rodriguez for a robbery that will make both Django and Gen. Rodriguez very wealthy men. Little does Gen. Rodriguez know that Django has plans of his own and that Maj. Jackson is responsible for the death of Django’s wife.

Quick to get into the savage gun battles, fistfights, and staring contests, Django is certainly a different breed of western, even when compared to Leone’s patient and thoughtful work. Corbucci doesn’t appear to have anything deeper on his mind and he is more concerned with getting to the next brutal confrontation between Django and anyone dumb enough to make him angry. Is there really anything wrong with this? No, not really. The film consistently keeps you glued to the action and you just can’t wait to see what is hidden inside Django’s coffin of death. In between the bloody showdowns, Corbucci builds a menacing and slightly creepy atmosphere in the confines of the ghost town and the local graveyard where most of the action takes place. The streets are muddy, the buildings collapsing, and the fences twisted beyond repair as storm clouds loom in the distance. It is the type of place that is so rough and tough, even the prostitutes get into muddy brawls in the streets. The graveyard is just as worse for wear, a dusty wasteland where jagged graves and dead trees barely stand against the howling winds and walls of dust. It certain is a grimy and vaguely apocalyptic vision where there are no heroes to make things right, just those looking out for number one and those who want to kill everyone in sight. Hell, these guys are so vicious; they don’t even flinch when they gun down the kindly bartender Nathaniel (Played by Ángel Álvarez).

While no one in Django gives an A-list performance, the players are all very memorable mostly because their characters are so colorful. Nero is the one in charge here as Django, a stone cold gunslinger who has hidden his heavy heart behind a brick wall.  He has little use for Maria, who he saves from certain death and then largely ignores (Yeah, I haven’t quite figured that one out either.). He spends most of his time sitting in the brothel, sipping a glass of whiskey and waiting for Maj. Jackson to show up and pick a fight. Naturally he does and Django kills a shocking number of his men in the span of maybe five minutes. We don’t learn too much about this mysterious drifter, only that he is out for blood and that he fears no man. Nusciak is quiet and haunted as Maria, a beautiful prostitute who finds herself in love with the consistently distracted Django. We learn that Fajardo’s Maj. Jackson is one wicked guy as he picks off innocent Mexicans in the muddy streets just to let off a little steam. Bódalo’s Gen. Rodriguez is a sweaty brute that is constantly being saved by Django yet is quick to dish out a little revenge despite all he owes to the heartbroken drifter. Álvarez is sweet and timid as the shaky bartender who tries so desperately to keep the peace between everyone. His fate is the only moment where the viewer’s emotions are put to work.

Despite its stunning brutality, Django was a massive hit in Italy and it inspired a huge number of unofficial sequels that all managed to work Django into their titles yet have very little in common with Corbucci’s film. There was only one official sequel, Django 2: il grande ritorno, that did star Nero but wasn’t directed by Mr. Corbucci. For fans of exploitation cinema, it may interest you that Ruggero Deodato, the man responsible for Cannibal Holocaust, served as assistant director on Django. If you’re looking to jump into the spaghetti western subgenre, Leone’s marvelous trilogy and Corbucci’s Django are great places to start. You may want to ease in with Leone’s A Fistful of Dollars to really see if this is your bowl of pasta but if you are big on action, Django will really have you on the edge of your seat. It’s also worth checking out for the super catchy theme song that plays over the dreary opening credits (Good luck getting it out of your head!). Overall, Django is flawed but it also happens to be a gritty, savage, pulpy, and highly influential ride through the Wild West. If you’re a cinema geek, western fanatic, or exploitation guru, you may want to seek this sucker out. It truly is one of a kind.

Django is available on Blu-ray and DVD.