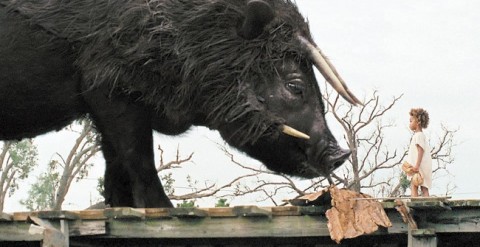 Even if director Benh Zeitlin’s surreal fable Beasts of Southern Wild wasn’t nominated for Best Picture, it would still demand to be seen on the grounds that it was 2012’s little indie that could. Based on the stage play Juicy & Delicious by Lucy Alibar, Beasts of Southern Wild was a small arty offering that was the talk of the cinema world for months before its release and months after. After whipping up critics and audiences into a frenzy at numerous film festivals across the globe including Cannes and Sundance and nabbing various awards, Beasts of Southern Wild was picked up by Fox Searchlight and released into a summer thick with superhero blockbusters and science fiction explosions. Maintaining buzz all the way into awards season, I feared that Beasts of Southern Wild would fail to live up to the massive amount of praise that was being laid before this debut feature from Zeitlin but astonishingly, I found myself swelling with hope as the film tugged me into an emotional coming of age blur. And if you don’t find yourself drawn in to the grungy dream world of the Bathtub, you’ll surely find yourself beaming over the performance from pint-sized heroine Quvenzhané Wallis, a child so fierce and brave, that she can stop charging Aurochs dead in their tracks. In fact, even if you have absolutely no interest in the film’s premise, see it just to marvel at the promising young talent and understand why Wallis is the youngest Best Actress nominee at the tender age of 9. I know I can’t wait to see what she does next.

Beasts of Southern Wild takes us to the southern Louisiana bayou called the Bathtub, a rusting and decaying community that is cut off from the outside world by levee. Despite the constant threat of climate change, flooding, and being forced out of their makeshift homes, the residents of the Bathtub never miss an opportunity to pause for the day to celebrate the joys of life. Among the colorful residents that live in the Bathtub is Hushpuppy (Played by Wallis), a precocious and brave little girl who possesses a vivid imagination. Hushpuppy lives with her father, Wink (Played by Dwight Henry), a testy alcoholic who is also suffering from a mysterious illness that he tries to keep from poor Hushpuppy. One evening, a strong storm hits the Bathtub and floods the homes of the residents, which causes the authorities to step in and force them to evacuate their homes. To make things worse, Hushpuppy fears that the frozen prehistoric beasts called Aurochs are thawing out in the Arctic and are going to charge into the Bathtub, destroying everything in their path.

Zeitlin does everything in his power to make the viewer feel like they are living in the Bathtub right alongside these fiercely loyal folks. They are immensely proud of their tacked together shelters and they do not intend to leave their community (those who do leave before the big storm are heckled by Wink). To make the viewer feel like they are right there, Zeitlin allows his camera to bob around and explore every nook and cranny of this decaying wonderland of shelters that can barely keep the howling winds out at night. When the time comes for the residents to leave, we are feeling their pain even if we would kill for a shower. We almost become used to the sense of seclusion and isolation, liberation from an outside world that consists of a looming gray power plant in the distance. It is an intimidating structure that suggests man has completely overpowered nature. In the Bathtub, man lives hand and hand with nature as animals roam free and homes are dug into thick walls of brush and trees. When the authorities come in, they march through in polos and pressed slacks, yanking the residents of the Bathtub in every single direction and forcing them into sterile waiting rooms where victims of the storm sit quietly with long faces. It really pierces your heart and deflates your spirit.

Then we have the lack of big name and profession actors in front of the camera, which really allows these Bathtub residents to come to life. The standout is Wallis as 6-year-old Hushpuppy, our adorable narrator who bravely lives by her own code. She has a trailer all to her self, which she proceeds to set on fire. She is left for days alone and confused by Wink, who mysteriously returns to their home in a hospital gown. Poor Hushpuppy is basically raising herself, with only occasional guidance by the unpredictable madman Wink. He shows her a thing or two about catching fish as they drift through the streets of the Bathtub in a makeshift boat and drunkenly teaches her how to crack and gnaw at some crawfish at a candle-lit dinner. As their journey plays out, we really learn to love their complex relationship, one that lacks a compassionate mother, a woman that Wink says was so beautiful, she could make water boil. Meanwhile, Henry continues to impress as the outburst prone Wink, who enjoys sipping from a liquor bottle and blasting his shotgun at the storm outside. Zeitlin slowly reveals the mysterious of his illness and then shatters our hearts in the final few minutes and he shares a touching meal of hot sauce doused gator with the teary-eyed Hushpuppy. It is easily the best sequence of the film, one that will have you scrambling to rewind it just to take in the mesmerizing acting of Wallis and Henry.

Upon first viewing Beasts of Southern Wild, the stark reality of the Bathtub world and the emotionally draining acting threaten to overpower the weightier aspects of the film. You’ll get chills as the Aurochs charge towards the Bathtub, only stopping to feast on one another to regain their strength. You’ll swell with emotion as Hushpuppy embarks on a miniature journey to find her mother, who cooks gator in a seedy strip club and cracks eggs by spitting a beer bottle cap at the shell (just wait until you get a load of her). You’ll fight back tears as Wink finally reveals the severity of his illness to little Hushpuppy. You’ll be filled with warmth as Wink shows Hushpuppy how to crack a fish on the head to kill it. You’ll swoon at the overwhelming sense of hope that flares up in the final frames of the film, as it is revealed that the residents of the Bathtub are one giant family, sticking together, rebuilding, and proudly marching in the face of tremendous devastation. I am reluctant to reveal all the secrets of Beasts of Southern Wild to you, as part of the excitement is finding out what everyone is raving about and then putting it all together. It may require a few viewings and a little bit of patience at first, but I advise you to just loose yourself in this world and I guarantee that you will be swept away into this dreamy fable. You’ll be glad you did.

Beasts of Southern Wild is available on Blu-ray and DVD.