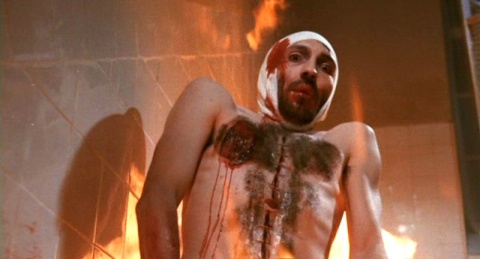 Zombies go green and embrace the counterculture in the 1974 Spanish/Italian zombie movie Let Sleeping Corpses Lie. With a score that sounds like it should have been in a 50’s science fiction film and a slew of red eyed zombies that predate the ones that showed up in 28 Days Later, Let Sleeping Corpses Lie is heavy on the atmospherics and light on zombie hoards. Throughout the course of it’s runtime, we only end up seeing a handful of cannibals that are risen from their eternal sleep by an experimental machine from the Department of Agriculture that supposedly gets rid of destructive insects. Made a few years before Romero unleashed his epic Dawn of the Dead, Let Sleeping Corpses Lie was made when the zombie horror genre was still discovering itself and embraced a smaller scope. Night of the Living Dead had sparked interest and fear of the zombie genre but it wasn’t aware of the terror in large numbers of ghouls. Instead, director Jorge Grau rips a page out of Romero’s Night of the Living Dead playbook and plays up the setting, landscape, our radiation fears, and the proceeds to mold them into a message that warns that if we continue to disrupt and pollute Mother Nature, she will begin fighting back.

Let Sleeping Corpses Lie follows antique shop owner George (Played by Ray Lovelock) as he takes a trip from the bustling city of Manchester to the Lake District so he can meet up with some friends to work on a new house. He stops off at a gas station and while he buys a drink, a young woman named Edna (Played by Cristina Galbó) backs her Mini Cooper into his motorcycle and badly damages it. George talks Edna into giving him a ride to meet up with his friends but Edna insists that she needs to get to South Gate and meet up with her drug addicted sister first, then he can take her car and go to meet his friends. The two soon need to stop for directions at a local farm where the Department of Agriculture is experimenting with a machine that rids the soil of destructive insects by causing them to kill each other. Soon, George and Edna have a strange encounter with a red-eyed maniac who tries to attack Edna. The same man shows up at the home of Edna’s sister Katie (Played by Jeannine Mestre) and her photographer husband Martin (Played by José Lifante). The strange man kills Martin and sends George, Edna, and Katie into hysterics over what they witness. A local Inspector (Played by Arthur Kennedy) refuses to believe George and Edna and he is convinced that they are just murderous hippies, even as the zombie numbers are growing across the countryside.

Let Sleeping Corpses Lie has fun toying with the fear of the counterculture in the wake of the Manson Family murders, as throughout the film, the conservative Inspector consistently accuses George and Edna of being hippie devil worshippers and any murder that he stumbles across is deemed a demonic slaying. Yet director Grau plays the rest of Let Sleeping Corpses Lie straight, making it’s message of protecting the environment stone faced. There is also the atomic age paranoia in the film, a touch that would have felt familiar in a science fiction film from the 1950’s. Grau, who I’m guessing was a part of the counterculture movement and was eager to defend it in the wake of the Manson Family, sends a plea for us to preserve Mother Nature. Grau doesn’t miss an opportunity to exploit the idyllic and serene beauty of nature, allowing the greens to pop out of the grainy camerawork. He is silently pointing out the beauty we are tarnishing.

For a zombie film, Grau knows that what made Night of the Living Dead so memorable was the unblinking feeding sequences. Let Sleeping Corpses Lie has plenty of the red stuff to go around and a few entrails as a slimy side. It grosses us out when appropriate, but the film also gives us the creeps through the sound effects of the zombies themselves. Whenever a ghoul is near, the film slow builds a pounding drum and a thick wheezing can be heard. It’s music usage and sound effects that are impossible to put into words, but is extremely effective for maximum fear. It gives the film an otherworldly vibe that crosses into the supernatural. The ghouls will pop up, terrorize a character, and then suddenly disappear, making them sometimes seem like ghostly apparitions. Grau further drives this approach by never really showing the zombies wandering the countryside in large numbers. They suddenly stumble into frame, rip someone apart, and fade away.

Let Sleeping Corpses Lie does suffer from a few growing pains as the cannibalistic zombie genre was still in its infancy. Grau proves that zombies could be used for more than Cold War fears, even if there is a Cold War panic looming over it with the atomic echoes ricocheting about. The film is slowly paced, something I always acknowledge in my reviews for the people who want the action to begin immediately. This film was slightly before the explosion of action packed and gore drenched zombie films that were made in the wake of Dawn of the Dead. It’s also much more intelligent than the Dawn of the Dead copycats. Surprisingly surreal and nightmarish, Let Sleeping Corpses Lie benefits from strong acting and arresting suspense, but while the pacing is patient, sometimes it is lopsided. Grau’s film has been severely overlooked over the years and he deserves recognition for his early, brainy contribution to the subgenre. In the end, Let Sleeping Corpses Lie is well worth your time, especially for the diehard horror community. I’ll leave you with this: Good lucking getting those unnerving wheezes out of your head after you have exposed yourself to this environmentalist nightmare.

Let Sleeping Corpses Lie is now available on Blu-ray under the title The Living Dead at Manchester Morgue.