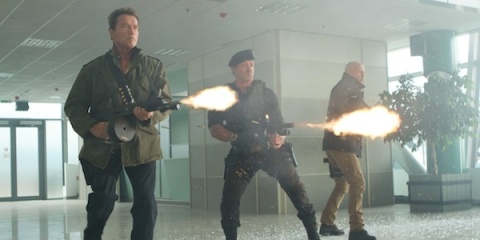 One thing that I never dreamed I would see in my lifetime is Sylvester Stallone duke it out with Jean-Claude Van Damme. Now if that doesn’t scream manly than nothing does. Thanks to director Simon West’s The Expendables 2, I have now seen these two titans of action beat each other to a bloody pulp and I have to say, I kind of enjoyed watching it. Yes, I sort of enjoyed The Expendables 2 because, well, it was the movie that should have been released back in August 2010. I wasn’t exactly kind to the first Expendables film and for good reason. It was pretty stupid and unfulfilling to say the least, a hoarse battle cry for the action films with empty beefcakes shooting their way through endless waves of bad guys. It also had a weak villain and not nearly as many aging action stars as it liked to think it had. Also, Stallone was taking things way too seriously, almost like the film (which he wrote, produced, directed, and starred in) was the reassuring whisper in his ear saying, “you still have it in you, man!”  Now we have the balls-to-the-wall sequel to that testosterone terror of a first film and the party has begun. Still weak in the plot depart and still light on character development, The Expendables 2 wins bonus points for the smart inclusion of Bruce Willis, Arnold Schwarzenegger, Jean-Claude Van Damme, AND Chuck Norris. Got all that? The only manly thing missing from The Expendables 2 is an all you can eat buffet of pizza and hot wings and a complimentary cooler of ice cold Budweiser, all served to you by a smoking hot blonde in a low cut tank top. Personally, I’m stunned Stallone didn’t demand all theaters provide this during showings of the film.

After rescuing a Chinese businessman from the clutches of a brutal mercenary in Nepal, Expendables leader Barney Ross (Played by Sylvester Stallone) and his team return to the U.S. for some much needed R&R. Playtime is cut short when Barney finds himself approached by the mysterious Mr. Church (Played by Bruce Willis), who asks that the Expendables travel to Albania to retrieve a set of blueprints from a downed airplane. Mr. Church also demands that Barney takes the beautiful tech expert Maggie (Played by Yu Nan) along with him. Barney reluctantly agrees to take the mission and begins rounding up the gang. With blades specialist Lee Christmas (Played by Jason Statham), martial artist Yin Yang (Played by Jet Li), heavy weapons specialist Hale Caesar (Played by Terry Crews), demolitions expert Toll Road (Played by Randy Couture), and snipers Gunnar Jensen (Played by Dolph Lundgren) and Billy the Kid (Played by Liam Hemsworth) by his side, Barney comes face to face with his deadliest foe yet—terrorist Jean Vilain (Played by Jean-Claude Van Damme). It turns out that the blueprints that the Expendables were sent in to retrieve could spell doom for the entire planet, but when one of their own is killed on the mission, the fight gets personal.

The Expendables 2 mulls you over with brute force the second it takes command of the screen but it isn’t all an ego stroke for Mr. Stallone. The Expendables 2 is willing to kid with the audience and even have a sense of humor about itself. The guys all crack jokes about their age and long for the youthful enthusiasm that radiates from newcomer Billy the Kid. In a way, you do sort of feel for these guys because, beneath all the protein bars and steroids, they do have hearts of gold. Still, when one of their own falls in the line of duty, they just sigh deeply, say a few words, and move on like the manly men that they all are. Come on! Show a smidgeon more of respect. Oh well, that is the kind of experience you are in for if you were wondering. Still, it is a MINOR improvement over the first film but it is clear that screenwriters Richard Wenk and Stallone still have little regard for the plot of their film. It is the typical stop the money hungry terrorist before he reduces the world to ashes. This loose storyline basically leads us to one massive action scene after another and I must say, these battles are incredibly satisfying on every level. My only complaint is that they resorted to the goddamn CGI blood! NOOOO!

It is hard to approach a film like this and expect to really evaluate the acting but there are a handful of standouts, if you can believe it. Stallone dials back his heavy determination and plays things a bit cooler. I can’t believe I am about to write this but the one who steals the entire film is Van Damme as the purring terrorist Vilain, a man with the meanest roundhouse kick you have ever seen. He’s just a few kicks short of brilliant if you ask me and you can tell he is having the time of his life back in front of a camera. When he isn’t chewing up the movie, Schwarzenegger, Willis, and Norris are. Schwarzenegger is like a giddy muscleman let loose on shopping spree in a GNC. He grins through one-liners like, “I told you I’d be baaahck” and you will be happy to join him in grinning. Willis, meanwhile, seems to enjoy being back in action mode after drifting into dramatic territory with Moonrise Kingdom. Willis is the most talented actor here and when he screams, “SHOOT SOMETHING”, he means it. Then there is Norris, the one who got the biggest response from the audience. You’ll be doubled over as Norris shoots his way through an ARMY of bad guys and then looks at Stallone and calmly says that he prefers to work alone. If that isn’t cool enough, Norris then references those jokes about him that have been passed around the Internet. Good to have you back, Chuck.

Then we have everyone else, who does the exact jobs that you expect them to do. Li is reduced to basically a cameo in the film and then he is off on his own. He does get a savage little confrontation at the beginning to keep his fans happy. Statham grumbles and mumbles over the fact that he is getting older and then throws some knives. There isn’t really any growth to be found in his character. Hemsworth brings some fresh talent to the mix but he isn’t given much to really do. He does bring a bit of depth with him, which was nice and pretty surprising consider no else cared to. Crews and Couture are here just to let you know that their characters are still alive and kicking. They get a few decent jokes here and there but they mainly just fill the background. And then there is Lundgren, who references his real life master’s degree in chemical engineering while sending a big wink our way. He almost seems desperate to convince us that he isn’t just some lumbering piece of meat. Rounding out the team is Nan, the female newcomer to this guy’s night out. She adds a sexy little sizzle and she can more than handle herself in a fight. It’s good to see Stallone is starting to let a few ladies mix it up with the boys.

Despite a familiar plot, thin characters, and some eye-rolling dialogue, The Expendables 2 still packs a mean action scene. The opening sequence has to rank as one of the most extreme action scenes of recent memory and it sure as hell leaves a lasting impression. I think it has to hold a record for the most deaths on screen in the span of ten minutes. The end fistfight between Stallone and Van Damme will have action junkies on their feet and begging for a lot more. And I have to admit that I smiled when Ah-nold and Bruce picked up some machine guns and joined the madness. And I have to confess that I laughed when Norris strolled onto the screen and let loose a fury that would make God tremble. My only other complaint about the film was the absence of the great Mickey Rourke. He would have been a welcome presence here as he really did most of the heavy lifting in the first film. There have been some significant improvements since the first film and I give The Expendables 2 credit for that but there is still room for even more improvement. For now, I’d happily sign on for a third mission with these guys. I just hope I don’t regret it.