While watching and battling to stay awake through the trudging second chapter in the Twilight saga, I came to the realization that New Moon is responsible for all the laughable clichés that have burdened this franchise. Every other scene in this turkey of a film is filled with a shirtless male pouting and explaining to Bella that they can’t be together. I guess they had to have some sort of selling point for New Moon because it certainly wasn’t going to get far on its storyline, performances, or writing, all which fall substantially from the first film. If you’re looking for the culprit, look no further than this film right here. There is no action aside from a fairly entertaining chase sequence in the middle of the film, cheap special effects, and a plotline that can’t quite decide what it wants to be about. To think that there is an army of rabid fans out there for this film truly amazes me after sitting through it. My advice: Stay home and read the book again. What you can imagine in your mind while reading is infinitely more fun than what director Chris Weitz cooked up and severed.

New Moon picks up with lovebirds Bella (Played once again by the stiff Kristen Stewart) and Edward (Played once again by Robert Patinson) openly dating and fairly happy. The film picks up with Edward and his family throwing Bella an 18th birthday party. She is less than enthused, as she suffered a horrible nightmare about growing old a night earlier. At the downer of a party, Bella suffers a paper cut while opening one of her gifts, causing Edward’s brother Jasper (Played by Jackson Rathbone) to attempt to kill her. In response to this event, Edward decides that Bella is not fit for Edward’s world and he leaves Forks with the rest of his vampire clan. Bella slips in to a deep depression and after an empty threat to send her to live with her mother by her Sheriff father Charlie (Played by Billy Burke), Bella agrees to bounce back from the break-up. Bella soon discovers that if she thrill seeks, she will see the apparition of Edward warning her to be careful. She also strikes up a friendship with the perpetually shirtless Jacob Black (Played by Taylor Lautner) which blossoms into hinted romance. Jacob soon starts acting funny and Bella eventually figures out he is a werewolf who is aiming to protect her from a revenge-seeking vampire that aims to kill her.

New Moon has absolutely no focal point whatsoever. It can’t quite decide what it wants its plotline to be causing the film to bounce around with no discipline to speak of. This falls on the shoulders of screenwriter Melissa Rosenberg, who botches yet another adaptation of Stephenie Meyer’s already rocky novel. One second the film is about the blossoming relationship between Bella and Edward. The next second it’s about Bella and Jacob developing a relationship just so Jacob can pull the same bullshit that Edward did. Then Edward is brooding about something and then so is Jacob. Director Weitz puts no cap on the film at all, never once cutting something out and making a more straightforward film. It actually begins to be unclear on who is upset with whom and who has feelings and treaties with whom. It’s daft! It’s drama for the sake of drama and the furthest thing from art. This lack of narrative structure and flow, for that matter, causes New Moon to collapse on itself. 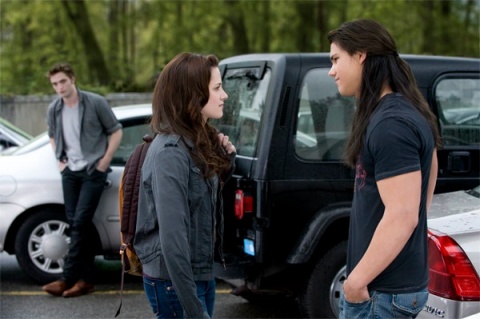 Further driving New Moon into the ground is the performances from the actors themselves, which actually end up being worse than the first time. Bella is even more pathetic and boy crazy. She’s superficial, feeble, and the furthest thing from a feminist hero. She falls to pieces over every guy she meets and constantly longs for a male crutch. The best bit from Stewart’s performance comes when Bella takes a tumble off of a crotch rocket that she builds with Jacob. She rolls into a giant rock, smashes her noggin, and nearly knocks herself out cold. Jacob rushes over, takes his shirt off (naturally), and wipes the gushing blood from her head. “Are you trying to kill yourself!?”, he asks. She just stares at him and says, “Sorry”. Oh, come on!! She just suffered a serious injury to her head! When Jacob points this out she says, “Oh”. Reconsider you day job, Miss. Rosenberg. Edward is largely absent from the entire project, only showing up in asinine hallucinations. Pattinson must have been instructed to leave his sense of humor in his trailer, as he just stands around and looks like he is in desperate need of a toilet. Lautner is supposed to be playing a real rough and tough killer but the only way Weitz and Rosenberg know how to convey that is by having him consistently taking off his shirt. Billy Burke’s Charlie Swan is a clueless moron, someone who is frustratingly ignorant to everything going on around him. How he hasn’t figured out that werewolves and vampires are running rampant in his town, I will never know. You’re best friends with a pack of them, you imbecile! Michael Sheen pops up at the end of the film as Aro, the leader of the vampire council called the Volturi. He appears amused by all of the nonsense around him and plays Aro with a flamboyant bounce to his step. Everyone else in the film is forgettable, yes, even Dakota Fanning, who is hidden behind red contact lenses.

Where Twilight had some fairly ordinary camerawork, at least it had the good sense to be somewhat eye grabbing. Director Weitz can’t even make the picture he has framed a joy to look at. He stages a nifty chase sequence through the woods set to Thom Yorke’s stuttering single Hearing Damage. This killer sequence boasts the best CGI of the movie, puts some of its characters in harm’s way, and it even kills off a character. How bold of you, New Moon! The rest of the action is a retread of the battle at the end of Twilight only set in Italy. The effects on the werewolves look like they belong in a made-for-T.V. movie on the SyFy channel. The film never visually pops off the screen and instead retreats in to an amber glow that engulfs everything Weitz points his camera at. Maybe he is trying to imply that this entry is much more “rustic”. Your guess is as good as mine.

The crime you will be quick to accuse New Moon of is monotony, but it is also guilty of inanity. It never once asks the viewer to think about anything, never hinting at deeper meanings or motives. The film throws around implied romance every chance it gets but it never gives us anything. There are, once again, a few pecks here and there, but nothing definitive ever comes to a head. This is just filler in between entries, simply introducing us to a new character for women to swoon over. It feels like there is a real story that is ready to be cracked, but it’s not in this film. This is just leftovers from the first entry and ones that have gone moldy. New Moon is also entirely too long and could have helped itself by scaling back. They just cram more and more crap into it, and by crap, I mean Bella, Jacob, and Edward just staring at each other. I guess all I can say is kudos to the author, screenwriter, and director who have made millions of dollars from blind teenagers. Open your eyes and see that New Moon is nothing more than a diversion from the fact that this film is about nothing. Except, well, Lautner’s abs.

New Moon is now available on Blu-ray and DVD.