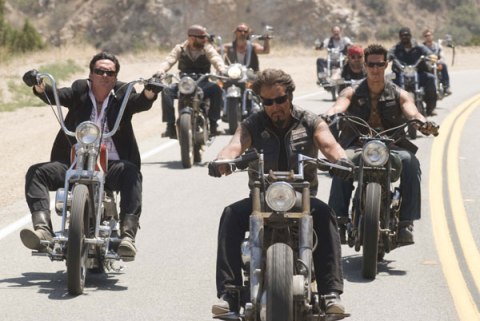 In 1966, Roger Corman’s American Internation Pictures (AIP) released The Wild Angels, an outlaw biker gang movie that gave birth to a brand new exploitation subgenre. With The Wild Angels a hit and biker culture breaking through into the media, AIP quickly started churning out more of these rough-and-tough biker films that featured up-and-coming stars like Peter Fonda, John Cassavete, Dennis Hopper, Jack Nicholson, Bruce Dern, and Larry Bishop. While Bishop never quite achieved the A-list status as some of the other actors that made appearances in these films, he remained a cult icon that obviously caught the eye of exploitation mega-fan Quentin Tarantino. In 2008, Tarantino encouraged Bishop to write, star, and direct a throwback to the outlaw biker films of the 60s and 70s, even offering to executive producer the picture if Bishop would agree to make it. The result of this collaboration is Hell Ride, a jumbled and awkward nod to the exploitation genre that gave Bishop his start. The only thing that keeps Hell Ride from being tossed into the junkyard is the presence of fellow genre stars Michael Madsen, David Carradine, and Dennis Hopper, who try their damndest to make sense of the script and add some extra slicked-back masculinity to all the blood, sex, and violence. It also slightly helps that the film boasts a fairly authentic late 60s/early 70s visual style and a gritty Ennio Morricone-esque score. 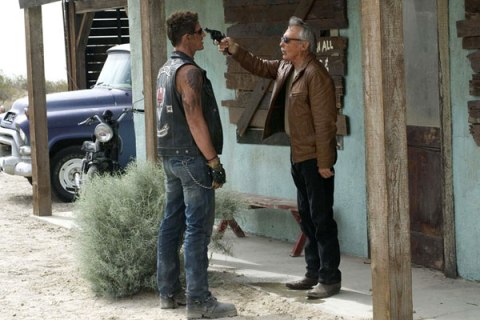 If you’ve seen the trailer or glanced at the poster for Hell Ride, you’ve noticed that Tarantino’s name shows up in big bold text on both, making it seem like he played a major part in the film’s production. About five minutes into the actual film, you’ll realize that is far from the truth. Where Tarantino is capable of delivering a casual cool that seems effortless, Bishop’s tough-guy style just seems forced and uninspired—amazing considering that this guy’s career began in these types of macho outings. Visually, Bishop understands how to make the film feel like a forgotten exploitation film from the 70s. It switches from gritty black and white shots of leather-clad bad-asses rocketing down dusty highways to vibrant LSD trips out in the rocky deserts. Strewn throughout the retro visual style is a plethora of sex, drugs, roaring steel, and violence, all set to a Morricone-esque score that gives the film a slight spaghetti western feel. The orgies, beheadings, ambushes, and motorcycle porn all seem appropriate, especially since Bishop is trying to pay tribute to a hardened exploitation subgenre. But where he really looses his grip on the project is with the characters, convoluted plot, and the cringe-worthy dialogue. It’s especially painful because these guys are veterans of the B-movie circuit.

In addition to writing and directing Hell Ride, Bishop also leads a legendary cast deep into the sizzling desert. A good majority of Bishop’s performance finds him mumbling his dialogue, staring down his opponents over his slouching sunglasses, or squeezing girl’s butts in a lame attempt to show he’s a real lady-killer. Madsen brings his Elvis-like cool to the role of the Gent, but he struggles with flimsy dialogue and a lack of anything substantial to do aside from standing around. Balfour does a surprisingly decent job at trying to hang with these grizzled beefcakes, as his character is the only one with anything resembling depth. The legendary David Carradine’s is reduced to being strapped to a chair and carefully growling bland dialogue at Bishop. Dennis Hopper seems to be having a grand old time back on his hog, but weirdly, Bishop seems like he is constantly restraining him when he should be letting him go full crazy. Rounding out the cast is Vinnie Jones as the wildly profane Billy Wings, a ruthless villain that is largely absent until the final stretch. Overall, for all the talent involved with Hell Ride, the entire project comes off as cheap and amateurish, which is perplexing because it should have been a rock-solid, testosterone-fueled thrill ride. To make it worse, the plot is like a tangled ball of yarn that Bishop can’t even sort out. This rusty clunker would have been better suited as a brief three-minute faux trailer in Grindhouse. It would have been a hell of a lot more fun.

Hell Ride is available on Blu-ray and DVD.

Get a load of a very young Jack Nicholson in the trailer for the 1967 biker flick Hells Angels on Wheels, directed by Richard Rush. 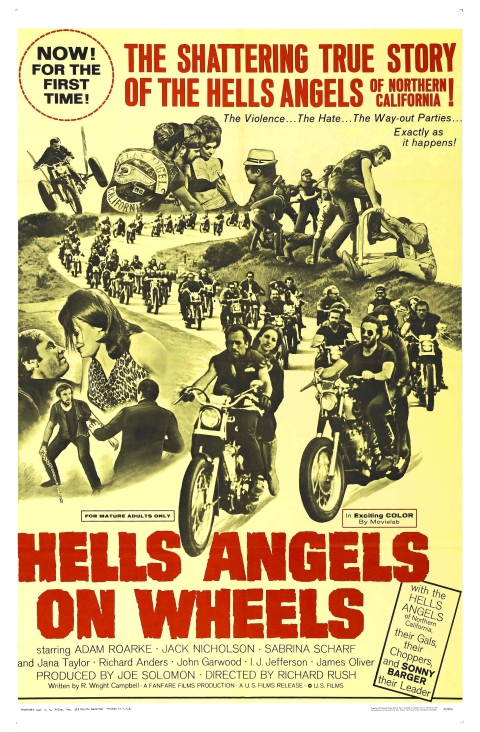 “They ride wild, play hard, and fight brutal!” Here’s a trailer for the 1971 exploitation biker-horror film Werewolves on Wheels, directed by Michel Levesque. 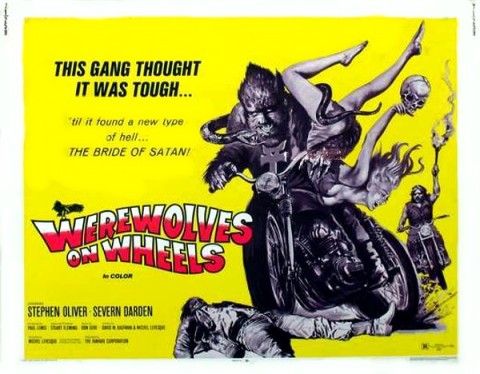 The wild ones… DEATH-DEFIANT! Check out a trailer for the sleazy 1966 biker flick The Wild Angels, directed by Roger Corman. 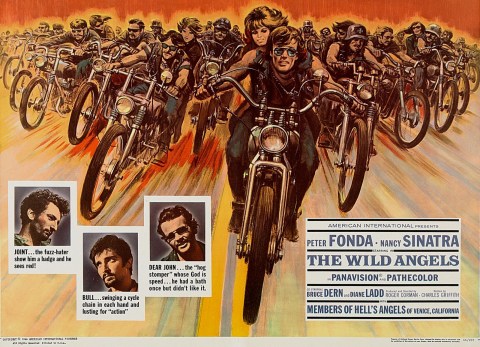