George Romero’s Night of the Living Dead and Dawn of the Dead did not strictly send the United States alone into a frenzy over zombie horror. Italy had also taken notice and they drooled over the ultra-gory horror flicks to the point where they went to great lengths to emulate the master’s formula and success. While many of these zombie films made in Italy from 1979 through the mid 1980’s were extremely poor in the quality department, there are still a handful of them that are reputable. They even have a rare scare or three to be found among the senseless nudity, exploitation, extreme violence, and wantonness. The best Italian zombie movie is without question Lucio Fulci’s 1979 fire starter Zombie, which is one of the goriest movie I have ever seen next to 1978’s Dawn of the Dead, 1980’s Cannibal Holocaust, and Hell of the Living Dead. It’s also not the level of awfulness that is 1980’s Zombie Holocaust, which used leftover sets and footage from Fulci’s tropical island nightmare. Zombie is the true embodiment of a grind house picture, inspiring Quentin Tarantino and Robert Rodriguez’s Grindhouse, which was loaded with nods to the original film. Shock rocker Rob Zombie also borrows the opening visuals of his concert from this film’s legendary trailer, which you can watch below this review. Many filmmakers have expressed affection for this film and remains one of the most talked about cult classics of all time. Not a great film, Zombie proves to be shockingly entertaining and influential.

Perhaps the most original of all Italian zombie flicks that were sent over from Italy with love, it was it’s own movie from beginning to end. Most of these other zombie films borrowed music from other zombie films (Hell of the Living Dead borrows music from Romero’s Dawn of the Dead), actual scenes (Zombie Holocaust), and even smashing together the jungle cannibal flicks (Cannibal Holocaust) with zombie films, making for some strange exploitation concoctions. I love these films, the most unusual that I have seen is without question Burial Grounds, a film that is another cult icon, one that is not sold widely and still is a movie that must be obtained under the table. I found my copy in a record exchange, the guy who sold it to me oozing with delight that a fan of these types of gorehound horror films was in his shop and even showing me other exploitation films I should own like the controversial 1976 film Snuff, a film that many people still argue features real death caught on camera. He practically reached over the counter to hug me when I told him I owned the two-disc DVD set of Cannibal Holocaust. I meet some strange individuals seeking out films like this and I love it. But Zombie is the true freak show of the group because it’s actually good!

The plot of Zombie is basically irrelevant, there only to guide us through disgusting peepshows of zombie feeding sequences, death scenes, and piss-poor excuses for two of the handful of actresses in the film to get naked. The film begins with an abandoned yacht floating into the New York City harbor, on board a handful of zombies, which immediately attack the police officers sent aboard to explore the boat. It turns out that the boat belongs to a scientist currently residing in the Antilles. A journalist named Peter (Played by Ian McCulloch) and the scientist’s daughter Anne (Played by Tisa Farrow) team up with another couple, ethnologist Brian (Played by Al Cliver) and his all-to-egar-to-get-nude explorer girlfriend Susan (Played by Auretta Gay). Once they reach the tropical island, they discover that it has been overrun with the walking dead who are seeking the flesh of the living. The group tries to round up Anne’s father and escape with their lives before they meet their demise. 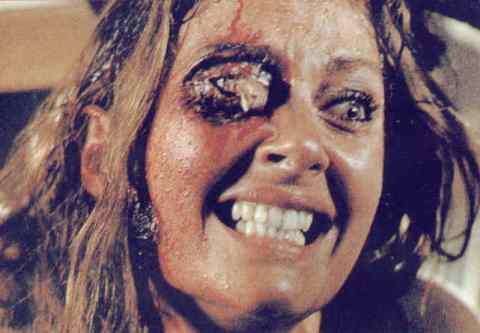 The plotline is one-dimensional and shamefully foreseeable, but it’s the effects execution that makes this film a true gross-out classic. The film was advertised as coming equipped with bar bags for audience members and while watching it; it’s easy to see why those with sensitive stomachs would be running for the bathroom. Zombie does have its fair share of tense moments, which makes it better than the average Italian zombie flick. The climatic siege on a church can run with the attacks on the farmhouse in Night of the Living Dead. Even at its crudest moments, like the looping of one particular scene, it still manages to be inescapably claustrophobic. Another inspired scene is an underwater attack by a zombie that ends with a zombie battling a shark. The cinematography is incisive, the choreography smooth, the editing tight, the vivacious electronic score just right, and the scares pitch perfect. It truly is an essential horror movie moment. Perhaps Romero saw the scene and was inspired for later installments (Land of the Dead) in his Dead series. The shots of abandoned villages are also hair-raising, showing wobbly villages caught in windstorms and billowing dust, rotting zombies staggering through the dirt streets. It’s probably some of the most handsome shots in any exploitation horror film.

This is not a film you see for the acting. You see it for certain moments and for how detailed the make-up and gore is. A scene with reanimated Spanish conquistadors is truly grotesque. The ghouls have worms falling out of their eye sockets, crooked rotting teeth darting at jugulars and ripping skin from throats. The ghouls are covered from head to toe in dirt and filth, blood pouring from gaping wounds. The dispatching of one zombie ends with a cracked skull and jellied brains pouring from it’s broken head. Another scene finds the scientists gorgeous wife getting snatched by a zombie and having her eye gouged out by a giant piece of splintered wood. It has to rank as one of the most unforgettable death sequences ever caught on film. It’s appalling. But Zombie doesn’t stop there. Our group of protagonists force their way into the scientist’s house only to discover a handful of hungry ghouls picking at her shredded corpse, with enough flowing blood and gooey guts to satisfy a hundred Romero zombie films.

Zombie is an experience. That I can say confidently. It’s not all that intelligent and it opts for style every chance it gets. It inspired countless other amateur Italian directors to take a stab at the zombie film. It’s extraordinary ghouls were the blueprint for films like Burial Grounds. The most vivid of all the ziti zombie offerings, it’s flawed (the end scene is absolutely hilarious, proving the budget on this film was not a large sum of cash), but somehow it adds to its allure. It’s not for everyone and I heavily warn those who seek it out. It’s brutal and relentlessly violent. The poor performances and extreme overacting will soften the blow, making the film go down easier for those who have trouble with it. One of my personal favorites around Halloween and a nice break from the complex Romero films, Zombie remains a cult icon. It will have you watching from between the cracked fingers covering your eyes and you may not want to eat anything red for a while after watching it, but I’ll be damned if it isn’t a blemished masterpiece. Grade: B+