When discussing film trilogies, most of the classics feature a third entry that suffers from fatigue in some way, shape, or form. Whether it is from a strained story, waning creativity, or implausible action, by the time the third installment has been reached, it might be time to for the filmmakers and the studio to call it a day. We’ve seen it happen countless times, in classics like the Godfather trilogy, the original Star Wars trilogy, and the Indiana Jones trilogy, all of which include a third entry that is passable entertainment, but lacking when compared to the first two films. Another trilogy that could be added to that list is the Mad Max trilogy, which reached its peak in 1981 with Mad Max 2: The Road Warrior. In my humble opinion, Mad Max 2: The Road Warrior surpasses the original Mad Max and has firmly secured a place among the greatest action movies ever made. In 1985, directors George Miller and George Ogilvie decided to bring their post-apocalyptic series to a close with Mad Max Beyond Thunderdome, which finds the directing duo ditching the brutality that the first two Mad Max films dolled out and getting in touch with their softer side. Mad Max Beyond Thunderdome is deceiving, especially within the first half hour, but when the film reaches the second kid-friendly act, things start to come apart and fast. Plus, who invited Tina Turner to this party?

Set several years after the events of Mad Max 2: The Road Warrior, Mad Max Beyond Thunderdome picks up with Max Rockatansky (played by Mel Gibson) wandering through the desert wasteland with his vehicle and a camel. Suddenly, Max is attacked by a plane piloted by Jedediah (played by Bruce Spence), who steals all of Max’s belongings with the help of his young son. Left with nothing, Max finally stumbles upon Bartertown, a colony riddled with the scum of the earth. Left with no other alternative, Max offers up his services to the Collector (played by Frank Thring), who believes the Aunty Entity (played by Tina Turner), the head of Bartertown, may have some use for Max’s skills with a weapon. Max meets with Aunty Entity, who puts Max through an audition to see how good of a fighter he really is. Max passes, and Aunty Entity hires him to infiltrate Bartertown’s Underworld and confront Master Blaster, the duo who oversees the pig feces refinery that powers Bartertown. Max’s job is to start a fight with Blaster (played by Paul Larsson), a mindless, hulking brute that protects the pint-sized Master (played by Angelo Rossitto), and kill him in a gladiatorial competition held in the Thunderdome. Upon learning that Blaster is mentally challenged, Max refuses to kill him in the battle, which leads Aunty Entity to banish him from Bartertown. Not long after he is sent out into the desert, Max is rescued by a group of children who believe he is their savior.

With such a cluttered story, Mad Max Beyond Thunderdome almost feels like two movies. The first half, which takes place in Bartertown, seems to fit perfectly with the first two Mad Max movies. It has colorful characters and a steam punk attitude that wins you over almost instantly. The detail of Bartertown is amazingly grungy, overcrowded, and dangerous, the type of place you’d expect to see in a world as cutthroat as this. Miller and Ogilvie guide this promising set up to the Thunderdome, where they stage an impressive fight scene that finds Max and Blaster hoping around on cables and swinging clubs and chain saws at each other while the dusty spectators chant, “Two men enter! One man leaves!” Once the fight is over and Max is sent on his way out into his sandy tomb, Mad Max Beyond Thunderdome hits a wall. With the introduction of the tribe of children, the film seems to come to a screeching halt as they babble on endlessly about “Captain Walker,” an airplane pilot who promised them that he would lead them to a new civilization. It is here that Mad Max Beyond Thunderdome goes soft on us, only to slightly redeem itself in the final frames by recreating the chase sequence at the end of Mad Max 2: The Road Warrior. 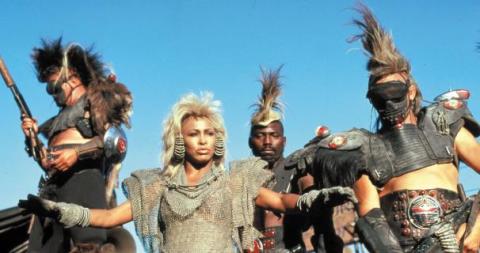 Mad Max Beyond Thunderdome does feature an interesting progression within its title character, and Gibson does a fantastic job despite the fact that he is asked to melt some of the ice that formed around his heart. Gone is the cynical man looking out for his best interests and in its place is a guy who seems to have bowed to the world in which he is living. He shrugs his shoulder when Jedediah and his son make off with his belongings and he warms to the tribe of children almost instantly. When in Bartertown, Max is hardened enough to fit right in and his former bad-ass self pokes through when he aims his sawed-off double-barrel shot gun at someone or he lunges at Blaster with a chain saw. Then there is Tina Turner, who does a fine enough job with her villainous role, but is way too distracting with her jazzed up soundtrack conflicting with the action. Bruce Spence is great in his returning role as Jedediah, the Gyro-Pilot from Mad Max 2: The Road Warrior. He basically only pops in here and there, but he gets a chance to be a real hero near the end of the film. Angelo Rossitto is scummy as Master, the brain behind the flourishing Bartertown, and Paul Larsson is flexing intimidation as the masked muscle Blaster.

Wearing its PG-13 rating proudly, a good majority of the graphic violence that the previous two installments displayed has vanished. Despite the lack of blood and gore, there are still a bunch of stunts that will hold the attention of action junkies. The final chase features plenty of fireballs, crashed dune buggies, and death-defying   stunts aboard a speeding locomotive. The action is undeniably handsome in all its debris-flying glory, but the sequence seems recycled from the second film. The scene in Thunderdome is also pretty epic, as Max and Blaster battle for their lives while hundreds of extras look on through the area’s bars. Just don’t be fooled by the presence of that chain saw. Overall, Miller and Ogilvie’s attempt to extend the scope of this rough and raw series is certainly commendable, and the set direction and costume design, especially in the opening sections, is first-rate. However, the introduction of the children and the sudden shift from merciless action thriller is distractingly spineless and tedious. It’s this kiddie-savior angle that causes Mad Max Beyond Thunderdome to clash with the rest of the series and rank as the worst installment in the Mad Max trilogy.

Mad Max Beyond Thunderdome is available on Blu-ray and DVD.