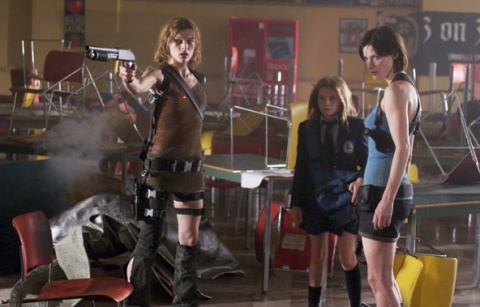 In case the cramped zombie/mutant terror of 2002’s Resident Evil left you wanting more action, then you should immediately seek out 2004’s Resident Evil: Apocalypse. Lacking the suspense and the chilling build up that the first film had, Resident Evil: Apocalypse hits the ground sprinting and launches into one long and very loud continuous action scene. A step down in nearly every department, Resident Evil: Apocalypse seems like a fans-only party that plays more like a video game that in its predecessor did. The film has the small group of survivors dodging and darting around a city where zombies stumble through fiery wreckage, Lickers crawl around gothic cathedrals, and a gigantic final boss called Nemesis prowls the streets while firing a rocket launcher at anything that moves a muscle. Where can I find a controller? The film also does a poor job fleshing out the new characters while its evolution of Alice, the gal who shot and kicked her way through the Hive in a little red dress, seems just too phony for us to buy. It’s pedestrian action that even lacks the annoying but memorable score from Marilyn Manson. Well, at least it has a whole bunch of zombies who are really, really hungry.

Just 13 short hours after the initial T-virus outbreak in the Hive, the sinister Umbrella Corporation sends a team of researchers in to reopen the Hive. Naturally, it is a huge mistake and swarms of the undead come stumbling out and kill of the team. In response to the outbreak, Umbrella quickly quarantines the city and begins a hasty evacuation of its highest-ranking employees. One of these employees is Dr. Charles Ashford (Played by Jared Harris), who has a daughter that gets stuck inside the walled off city. As panic rips the city to shreds and the citizens turn into mindless cannibals, Umbrella decides that they are going to nuke the city. With time quickly running out, Dr. Ashford finds Alice (Played by Milla Jovovich), a former employee of Umbrella who is still inside the city. He explains that if Alice can find his daughter, than he will arrange for her to be evacuated from the city. In her search, Alice stumbles upon STARS solider Carlos Olivera (Played by Oded Fehr), police officer Jill Valentine (Played by Sienna Guillory), Sergeant Peyton Wells (Played by Razaaq Adoti), and surviving citizen L.J. (Played by Mike Epps), who all agree to help her battle the endless waves of the undead. The mission gets even more dangerous when Umbrella sends in Nemesis, a mutant super soldier that is seemingly indestructible.

With more special effects, more explosions, and more of Jovovich’s bare chest, Resident Evil: Apocalypse certainly has plenty of eye candy for males between the age of 17 and 30, but the story, if you can believe it, has been extremely watered down even more than it already was. The plot is pretty feeble and seems like it was thought up in a hurry, just to quickly crank the film out so the studio could cash in on the popularity. The film is never very scary and it has only a handful of white-knuckle moments to speak of. In a way, you will find yourself wishing that Paul W.S. Anderson would step in (if you can believe it) and relive new director Alexander Witt, who just seems to be going through the blockbuster motions. Witt isn’t a very interesting director, opting to make things visually stimulating through blurry shots of zombies shuffling up stairways or through windows or low angle shots of characters firing Gatling guns. There is small amount of fun to be had, mostly because the film is padded with infinite amounts of brainless and completely nonsensical action. There is one scene after another of Alice running away from trigger-happy helicopters, jumping through the air with two pistols in her hands, and crashing motorcycles through church windows. It’s wanton destruction just for the sake of destruction.

While the acting in Resident Evil wasn’t anything to write home about, it still fared better than the acting of Resident Evil: Apocalypse. Jovovich is still the tough cookie she was in the first film but with far less personality here. All Witt asks of her is that she be game to flip through the air and fire a couple of machine guns. Guillory’s Valentine struts around in a tube top and posing like she is Victoria Beckham. She is supposed to be a no-nonsense cop but she is rather forgettable version of Lara Croft in a high tech metropolis. Fehr plays the clichéd tough guy commando by the books, doing virtually nothing different with the character he signed on to play. Meanwhile, Mike Epps has a blast wisecracking his way through the role of L.J. He is here to lighten the tension but there is very little tension so he to be found so he just seems out of place. Still, he gets the film’s best one-liners and his encounter with a pair of topless stripper zombies will have you giggling. Jared Harris manages to get by as Dr. Ashford, a character that is largely ignored and there simply to move the poor excuse for a plot along to the next battle scene. Adoti drops in as Wells, a character that is only here to be zombie bait. Also on board is Thomas Kretschmann as Major Tom Cain, an evil Umbrella employee who forces Alice to do battle with Nemesis for his own enjoyment.

Resident Evil: Apocalypse does have some pretty impressive special effects and I have to say that some of the detail on Nemesis is pretty darn dazzling. Granted, the character just walks around and growls but he does make an impression by just stepping on the scene. Sadly, I found the way that they worked him into the action to be pretty pathetic, as he has nothing really to do except hunt down STARS officers and fight a genetically altered Alice. The zombie mayhem is still pretty fun and there are plenty of moments where the ghouls get to viciously rip some human flesh from the bone. I especially enjoyed the scene where Alice and company cut through a graveyard and zombies begin crawling their way out of the ground. It’s a pure B-movie moment but I couldn’t help but wonder if they use coffins in Raccoon city (apparently not). If you happen to be a big fan of the Resident Evil video game franchise, you’re going to love this movie. It’s apparent that Witt is determined to cram in as many characters and references from the game that he can. While I am not a die-hard fan of Resident Evil, I will still give him credit for trying to deliver for the ones who adore these characters and plots, but I wish that they wouldn’t have just thrown characters and plots in for the sake of doing it. Overall, Resident Evil: Apocalypse is a pretty mixed bag of solid zombie carnage, B-movie action, and artificial thrills that are used up before the end credits. Video game controller not included.

Resident Evil: Apocalypse is now available on Blu-ray and DVD.