America, you can all breath a collective sigh of relief. That nagging question on all of your minds has finally been answered. We now know what it looks like when Ghost Rider urinates! I know, I know, I was wondering when we would finally get the definitive answer to that brain-melting question. Thank you, Marvel! On a serious note, Ghost Rider: Spirit of Vengeance is another swing and a miss for the Marvel Knights, the spin-off studio of Marvel Studios. Marvel Knights, we created in an attempt to bring some of the darker superheroes from the comic pages to the big screen and so far, they are zero for two (the other masterpiece from this branch division is Punisher: War Zone). With a fresh pair of directors (Crank’s Mark Neveldine and Brian Taylor) and the studio hitting the restart button (subtly), Marvel somehow managed to make things even worse and make a film so unpleasant, the only reason it avoided the direct-to-DVD barging bin was the fact that Nicolas Cage’s name is leading the credits.  To my astonishment, Cage throws himself into Ghost Rider: Spirit of Vengeance with such maniacal delight, I think that he may have finally hit rock bottom, and I thought that bottom was the FIRST Ghost Rider. Cage must really be a big fan of Ghost Rider and really hurting for money to agree to do this to himself. And to think that this man won an Oscar.

Ghost Rider: Spirit of Vengeance picks up eight years after Johnny Blaze/Ghost Rider (Played by Cage) battled the gathering satanic forces on American soil. He has been on the run and hiding out in Eastern Europe ever since, trying to deal with the curse that has been put on him by Roarke (Mephistopheles) (Played by Ciarán Hinds). Blaze soon finds himself approached by French priest Moreau (Played by Idris Elba), who asks Blaze to track down and save a young boy, Danny (Played by Fergus Riordan) and his mother, Nadya (Played by Violante Placido), from Roarke’s forces that are pursuing them. It turns out that Roarke, who is the Devil in a human body, wants Danny so that he can take a new human form on earth. Blaze reluctantly accepts the offer on the condition that Moreau takes him to a group of priests that will be able to lift the fiery cruse that plagues him. As the battle rages for Danny’s fate, the Devil unleashes the deadly Blackout (Played by Johnny Whitmore), who possesses the power to decay anything he touches, to deliver him Danny and kill Ghost Rider any way he can.

There really isn’t much to say about the plotline of Ghost Rider: Spirit of Vengeance. It sucks and that is all there is to it. Half the time, it is barely coherent underneath all the searing action that cuts through the film like a white-hot knife. The story, which was penned by Scott M. Gimple, Seth Hoffman, and David S. Goyer (yes, the same David S. Goyer who helped revive Batman), is basically a recycled glob of other, better satanic horror films. Think a touch of The Exorcist with a big scoop of Rosemary’s Baby fused with Crank and the original Ghost Rider. When I wasn’t rolling my eyes from the story, I was busy fighting off motion sickness from the constant shaking of the camera. Mind you, I have NEVER once got motion sick from a movie before but I can say that Ghost Rider: Spirit of Vengeance was the film that had me reaching for the barf bag. I couldn’t wait until things slowed down so that my stomach would stop doing somersaults. I wish that the nausea was worth it and that there was some cool action scene to tell you about but the fight scenes are all the same here. They all basically consist of a bunch of bad guys standing around, Ghost Rider barreling towards them on his bike as they all stand in shock, and Ghost Rider approaching them one by one and sucking their souls out. That is all there is to it. 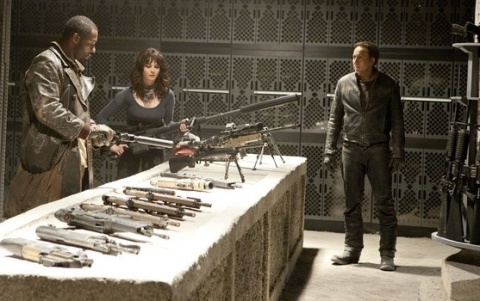 If I had to think of one reason for you to see Ghost Rider: Spirit of Vengeance, I’d say see it for the way that Cage throws himself into the role of Johnny Blaze/Ghost Rider. I promise that you have never seen anything like it in your entire life. It is almost like we are watching a nervous breakdown documented in a big budget blockbuster. Cage is all shaky delivery and bone rattling screams as his face bubbles and contorts into the charred black skull. I guess if my career had come to what his has, I would be starting to go a little berserk myself. Luckily, Idris Elba is present to take things down a notch in one of the worst French accents you will ever hear. Don’t get me wrong. Elba brings more to the table that anyone else does here but it is so painful to watch him slip like this. Come one, Idris, you have been awesome in the past! Hinds seems to get a kick out of delivering lines like “Worst fucking deal I ever made” right to the face of the fiery Ghost Rider. He is slumming it after doing heavier work like Tinker Tailor Solider Spy. Riordan is a forgettable child actor who doesn’t even register in all the chaos while Placido is the eye candy, taking over where Eva Mendes left off.  Whitmore really tries to shake things up as Blackout but he has to be the most pointless character in the entire film. He is only here to provide the audience was a high-speed slugfest in the final moments of the film.

Neveldine and Taylor do what they can to add a smidgeon of emotion to this project but they cannot resist the urge to just leap back into the head pounding action. They try to throw in a half-assed relationship between Blaze and Danny but it such a weak attempt, it practically disappears from your memory by the end battle. I can say that I was pretty impressed by the special effects and I did like the overall look of Ghost Rider. Shaking off some of the polish that original director Mark Steven Johnson had slathered all over his CGI hero, this version of the character is a hell of a lot grittier than what Johnson came up with. It actually suits the character but it is a shame this was not applied to a much better movie. Much like the Punisher, I know there is someone out there with a good story for Ghost Rider but this certainly wasn’t it. It is time for Cage to walk away from the franchise and really do some soul searching because the man has completely lost his marbles. And to you, Mr. Goyer, what is your excuse? You helped bring one of the greatest superhero trilogies to the big screen and then you follow that up with this piece of shit! Do you hate comic books and comic book movies?! With the level of quality that we have seen in films like Iron Man, Thor, Captain America, X-Men, V for Vendetta, Watchmen, and The Dark Knight, there is no excuse for these types of superhero films in 2012. Ghost Rider: Spirit of Vengeance should have been tossed into an incinerator and forgotten. All of you responsible for this, sit in the corner and think about what you have done.

Ghost Rider: Spirit of Vengeance is available on Blu-ray and DVD.