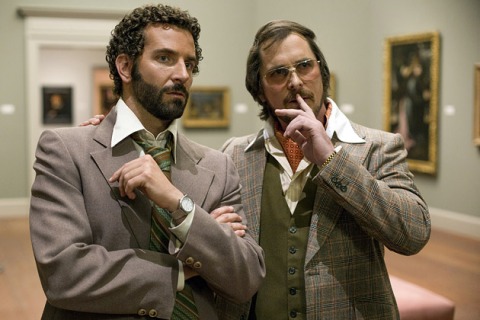 Ever since his directorial debut in 1994, David O. Russell is a filmmaker that continues to surprise critics and audiences with the wide range of films that he produces. He’s done indie comedies (Spanking the Monkey, I Heart Huckabees), mainstream comedies (Flirting with Disaster), war thrillers (Three Kings), political comedies (Nailed), sports dramas (The Fighter), romantic comedies (Silver Linings Playbook), and now, just under a year after releasing his celebrated Silver Linings Playbook, he tackles another project that expands his intriguing body of work. Just in time for Oscar season we have American Hustle, a film that has been receiving glowing word of mouth over the past several months for its intoxicating blend of 70’s style, quirky characters, dry humor, and rich story that consistently pulls the rug out from under the viewer at every turn. With expectations at a staggering high, you start to wonder if this tale of a sleazy con man, his gorgeous partner, and a shifty FBI agent could ever live up to such praise. Yet with each passing second, American Hustle hits entertaining levels that are off the charts, and it finds Mr. Russell in full form, radiating a confidence we have yet to see from this talented filmmaker. Russell can also thank his star Christian Bale, who gives the best performance of his career, for making American Hustle such a strutting must-see.

American Hustle introduces us to Irving Rosenfeld (played by Christian Bale), a smooth-talking con man that runs a chain of Laundromats and on the side operates a seedy loan business where he takes $5,000 from desperate clients and gives them nothing in return. Life is pretty good for Irving, but it gets even better when he meets the beautiful Sydney Prosser (played by Amy Adams), who is drifting from job to job. After showing his business off to Sydney, she jumps on board and assumes the identity of Lady Edith Greensly, a British bombshell with overseas banking connections. As Irving and Sydney rob their clients blind, the two strike up a romance that is kept from Irving’s motor-mouthed housewife, Rosalyn Rosenfeld (played by Jennifer Lawrence), who paces around their home like a caged tiger. It doesn’t take long for Irving and Sydney’s operation to be thwarted by Richie DiMaso (played by Bradley Cooper), an eager FBI agent looking to make a name for himself at the bureau. Rather than locking Irving and Sydney up in jail, Richie decides to use the con artists to help him with an operation called Abscam, which would lure Carmine Polito (played by Jeremy Renner), the beloved Mayor of Camden, New Jersey, into taking a bribe. Irving and Sydney reluctantly agree to help Richie, but their plot to take down Politio takes a dangerous turn when several other high level politicians and ruthless mobsters get involved.

With so much style and humor to burn, American Hustle wouldn’t even need its winding and weaving script that finds all of its boldly drawn characters attempting to get over on each other. From the opening retro studio logos, Russell is gleefully smashing open a post-Vietnam and Watergate time capsule, which allows us to glimpse an America that has embraced earth tones, tacky oversized sunglasses, perms, bell bottoms, leisure suits, plunging dress necklines, and disco music. It’s all so loud, excessive, and in your face that it threatens to be cartoonish. It also guarantees that American Hustle is going to be a strong contender in the production design category, costume design category, and make-up and hairstyling category. While the meticulous attention to detail certainly makes the film entertaining, the sense of humor that Russell injects is an absolute wonder. The film opens with Bale’s Irving fussing with his comb over, hilariously gluing strips of hair down over a tuft of fake fuzz. It is guaranteed to have the theater doubled over in laughter, especially when Cooper’s DiMaso decides he is going to mess the eccentric masterpiece of a hairdo up. Also brilliant is the winking trip to a flashing disco club, where Adams and Cooper burn through the dance floor like fiends. It’s wildly hilarious and hot-under-the-collar sexy as they shimmy and shake their way to a dimly lit bathroom stall. American Hustle’s crown jewel of hilarity comes when Irving and Rosalyn have their very first fiery encounter with a microwave, which they continuously refer to as the “science oven.” 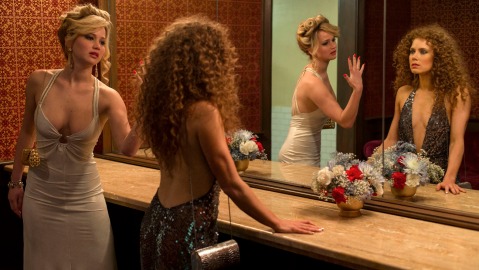 Making American Hustle even more irresistible is the A-list cast, who all seem like they are locked in a never-ending battle for the spotlight. While they are all fantastic, none come close to matching the work of the out-of-this-world Christian Bale. We’ve seen Bale immerse himself in his characters before, but none have been quite as charming and alive as Irving, the pudgy con man with the meanest comb over you have ever seen. In front of Sydney, his clients, and even DiMaso, Irving has a silver tongue that really works a room. His confidence practically burns a hole in the screen, but when he’s behind closed doors and facing the wrath of Rosalyn, he’s a fidgeting disaster that clutches at his heart and pops little white pills to calm his weak ticker. Adams is a spitfire as his redheaded partner, Sydney, who throws on a British accent and toys with DiMaso’s heart. Adams and Cooper share two specific moments that could practically set the screen ablaze. Cooper nails his role as the slimy DiMaso, the hotshot FBI agent who wears his perm like a crown. Lawrence is as sexy as ever as Irving’s restless wife Rosalyn, a bored and neglected housewife who threatens the whole operation. Then there is Renner as Polito, the optimistic Mayor who is determined to bring back Atlantic City any way he can. Rounding out the cast is Louis C.K. as Stoddard Thorsen, DiMaso’s perpetually peeved boss who can never seem to get control of his determined agent.

As if the style, humor, and fluid performances weren’t enough to make you fall in love with American Hustle, the film also boasts a firecracker of a script from Eric Warren Singer and Russell. Slightly based on true events, it dares to be unpredictable, sweet, intimate, touching, and intensely character driven as all of these characters that claim to do anything for survival try to play each other any way they can. It’s a thrill not knowing what direction it’s going to veer off in next. All the bickering and scheming builds to a witty final act that springs a double-cross rush that leaves you floating out of the theater. Overall, American Hustle finds Russell at the top of his game as a filmmaker. He is working with an airtight script, capturing brilliant performances that play phenomenally off each other, filling his frames with gorgeous set and costume design, and allowing his sharp sense of humor to fuel its soul. The end result is gold-plated entertainment that is guaranteed to retain its shine for years to come and reward with multiple viewings. By the end of the film, you will respect the hustle.