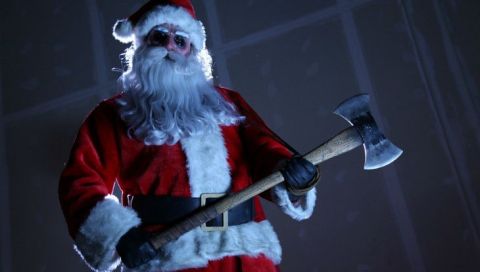 In November of 2012, Anchor Bay Films quietly snuck Steve C. Miller’s Silent Night, a loose remake of the 1984 Christmas slasher Silent Night, Deadly Night, into select theaters and then quickly released it on Blu-ray and DVD just a few short weeks later. Were us horror fans really that bad that we deserved a lump of coal like this?! Apparently yes, yes we were. From the get-go, it is obvious Silent Night is winking at the horror fans that will undoubtedly flock to it over the years. But too often, the film is awkward and amateurish, consistently confusing pulpy gore for honest scares to the point where it is almost maddening. To make it worse, this abysmal waste of time can’t seem to smoothly deliver anything resembling a good joke. It’s so bad, folks, that even a beloved genre star like Malcolm McDowell can’t even sell it, and believe me when I tell you that he tries very, very hard to make this formulaic snoozefest work. The only positives that you will find in Silent Night are the homicidal Santa, who prefers to toast his victims with a flamethrower, and a scene in which one character gets their head chopped in half with an axe. That is where this turkey’s joys begin and end.

Silent Night picks up on Christmas Eve, where the citizens of a small Midwestern town are gearing up for a massive holiday celebration that invites hundreds of Santa Claus impersonators to get in on the fun. Among the citizens looking forward to the holiday activities are Aubrey Bradimore (played by Jamie King), a sheriff’s deputy still attempting to get over the loss of her husband. The celebration seems to be getting off to a smooth start, aside from one belligerent Santa (played by Donal Logue) who is making children cry in a local park, but things take a nasty turn when a small-time porn director and his star wind up brutally slaughtered at a local motel. Bradimore, fellow deputy Giles (played by Andrew Cecon), and the town Sheriff, Cooper (played by Malcolm McDowell), launch an investigation, but they realize that this massacre isn’t an isolated incident. After watching a videotape that was rolling during the murders at the motel, the officers discover that their suspect is dressed as a morbid Santa Claus, making it extremely difficult to track down the killer and bring him to justice. As the sun sets and the celebration kicks into high gear, several more citizens turn up dead, but the quest to track down the maniacal Santa gets personal when one murder strikes close to home for Aubrey. 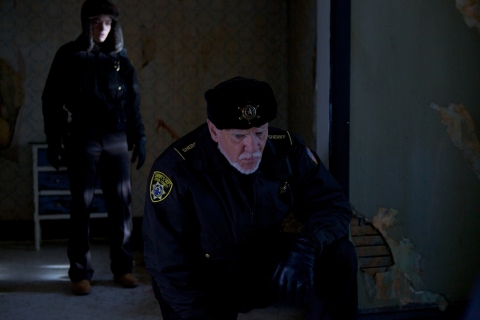 Silent Night opens with a pitch-black opening credit sequence that suggests that what we are getting into is going to be a straight-shooting horror movie that wallows in shadowy suspense. Miller’s camera is trained on the killer as he makes his chilling Santa mask, suits up in that jolly red suit, and torments one victim with an axe before offing him in a totally unexpected manner. It’s a sturdy stage setter, that you cannot deny, but once Miller emerges from that dark cellar and lets his killer loose on the town streets, the film quickly plummets. Almost every death scene is completely wooden, shot with a jittery camera and strung together through fast edits that resemble something out of a heavy metal music video. These death scenes will undoubtedly please gore fans, as the blood sprays in every single direction, but they never rise above being gross. Now I’m certainly not one to complain about gross, but Miller never even considers injecting an ounce of terror into any of these scenes. They just flail around on the screen with sudden blasts of music, the same old lazy jump scares that we have all come to expect from uninspired horror exercises such as this. Furthermore, the “ick” moments seem to lack a punch of originality, especially a scene in which a wannabe porn star is crammed into a wood chipper. It’s nauseating enough, but it seems like more of an obnoxious cry for attention rather than a vicious little surprise.

In addition to the lack of solid scares, Miller can’t seem to get his actors to do much with Jayson Rothwell’s clunky script, which is bogged down with clichéd dialogue and leaden one-liners. McDowell taps into his fiery wit and bug-eyed smugness, but even he can’t make some of the jokes work. It’s almost painful watching him spit out lines like “what is this, Glee?” to one caroling officer. And to think that this is the same man who played the sadistic Alex De Large in A Clockwork Orange! King’s Aubrey fares no better, as she just sulks around and forces a brooding side to her one-dimensional heroine. Cecon’s Giles is also pretty painful, a dimwit only present to bite it in an idiotic death scene. The only two actors who seem to rise above the material are Logue, who gets to have a bit of fun as a cranky Saint Nick who rants and raves about the holiday season, and Ellen Wong, who shows up as the perky Brenda, the wisecracking secretary of the police station. Overall, while all of the bloody mayhem and tongue-in-cheek approach may sound tempting to horror fans, Miller’s Silent Night is a flat, clumsy, and scare-less affair that bores more than it thrills. Aside from it’s chilling killer, it is just another careless remake that should have remained shelved at the studio.

Silent Night is available on Blu-ray and DVD.