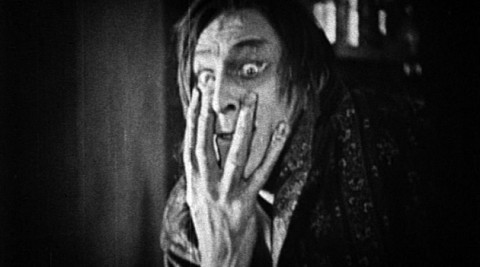 When we look back upon the silent horror films that were emerging from both Germany and the United States in the 1920s, the visual differences between the two countries are absolutely amazing. Germany used exaggerated gothic landscapes that were Brechtian in their appearance yet brimming with an eerie atmosphere that emitted from the heavy shadows and sharp edges. When we look at the 1920 classic The Cabinet of Dr. Caligari, it’s glaringly obvious that what we are watching is taking place on an elaborate stage with a spiked and warped backdrop. Even though there isn’t an ounce of realism to the sets, somehow the film manages to lure us in and chill us with the idea that these images are merely the distortions of a disturbed mind. Even in 1920, it is highly unlikely that audiences weren’t noticing this. Around the same time in America, director John S. Robertson released the spit-shined Dr. Jekyll and Mr. Hyde, a conservative bore when compared to the German Expressionist offerings. Based upon the novella by Robert Louis Stevenson, Dr. Jekyll and Mr. Hyde is never able to muster the terrifying mood that The Cabinet of Dr. Caligari does. It doesn’t even come close. However, despite its beige studio appearance, Dr. Jekyll and Mr. Hyde does benefit from a celebrated performance from John Barrymore, who hunches himself into a hideous monster born from man’s deepest, darkest desires. It’s through Barrymore’s performance alone that Dr. Jekyll and Mr. Hyde is able to cover its other insipid features.

Dr. Henry Jekyll (played by John Barrymore) is an upstanding citizen. He is a workaholic who locks himself in his lab for hours on end, runs a free clinic in his spare time, and balks at the idea of ever having a good time, which irks his future father-in-law, Sir George Carew (played by Brandon Hurst). George believes that Henry isn’t nearly as good as he pretends to be, and he argues that Henry should indulge some of his darker impulses every now and then. After enduring an endless string of taunts from George and being forced to go to a seedy nightclub, Henry begins working on a potion that can separate man’s two natures into two separate bodies, one that is wholly good and one that embraces a darker lifestyle. Henry tests the potion on himself and he quickly transforms into Edward Hyde, a homely creature that haunts dingy nightclubs and has a fling with an Italian dancer named Gina (played by Nita Naldi). Meanwhile, Henry’s finance, Millicent (played by Martha Mansfield), begins to grow suspicious of her fiancés mysterious absence. She asks her father to help her track him down and get to the bottom of what he is up to. As Millicent and George race to find Henry, Hyde’s behavior grows more and more violent with each passing second.

The early parts of Dr. Jekyll and Mr. Hyde find the film struggling to find some form of momentum. Robertson expertly frames Barrymore and his performance as Henry Jekyll, presenting him as a bang-up guy driven by scientific progression and concerned with giving back to the community where he can. He’s likeable enough to point where he really spices up drab scenes of men sitting around a dinner table debating about man’s two natures while one-dimensional intertitles present us with their dialogue. The lack of a good set piece really doesn’t do much for the film either, making the opening twenty minutes a bit of a chore to sit through. Those with short attention spans will be contemplating hitting the stop button. However, after Henry ventures to that nightclub and lays eyes on Gina, things start to pick up. One of two highlight moments come when Henry transforms into Hyde, which was done without the use of special effects. It relies simply on Barrymore’s ability to morph into a horse-faced demon with curled lips revealing what appears to be hundreds of teeth. From here, the depraved behavior of Edward Hyde keeps the action interesting as he creeps into bars and sneaks up behind tipsy gals. Suspense is generated through Hyde’s increasingly erratic behavior, which slowly shifts from perverse to bloodthirsty.

Much of Dr. Jekyll and Mr. Hyde’s success rests on the shoulders of Barrymore, who outshines everyone else as he dances between good and evil. His transformation is tragic, and the poisoning of his squeaky-clean soul does make him all the more sympathetic. The most painful moment for his character comes when he is forced to watch Gina perform her dance routine, a lust slowly blossoming despite the fact that he is engaged to Millicent. With a role that demanded so much, it isn’t difficult to see why Barrymore is the stand out. He is doing more acting than anyone else in the picture. This film could have been a real disaster had the filmmakers not found someone able to glide so smoothly between a malicious parasite and an upstanding do-gooder. Naldi adds a bit of sex appeal to the film as Gina, the erotic Italian dancer who gets tangled up with the hunchbacked Hyde. Martha Mansfield may as well not even be in the picture as Millicent, the angelic love interest who strains to find something useful to do. Brandon Hurst fares a bit better as Sir George Carew, who taunts the mild-mannered Jekyll any chance he gets. He has a particularly unsettling run-in with Jekyll that seriously makes him regret dragging his future son-in-law to that nightclub.

While its cautionary deliberations and square performances weigh it down, Dr. Jekyll and Mr. Hyde does manage to cough up one of the most horrific moments in horror movie history. Near the end of the film, Henry lies in bed and suffers a hallucination/nightmare that finds Hyde crawling out from under the bed and latching onto the terrified Henry. The effect is masterfully accomplished through layering, but it’s the look of Hyde that really shakes you up. He’s almost resembles a spider-like parasite, with tentacles hanging off of his bump back as he inches up onto the bed to latch to his host. It’s probably the best moment of the entire film and you’re left wishing for more inspired visuals scares like it. As far as the climax goes, there are a few scenes that get the pulse pumping, but it’s nothing compared to the hallucination/dream sequence. Overall, while it’s an artistic bore and it suffers from some sluggish stretches, Dr. Jekyll and Mr. Hyde manages to overcome some of its weaknesses through a must-see performance from the gifted Barrymore and a handful of ghoulish scenes that make it a solid watch for cinema buffs, monster aficionados, and horror fans. Just don’t expect a few sleepless nights after your viewing.

Dr. Jekyll and Mr. Hyde is available on DVD.