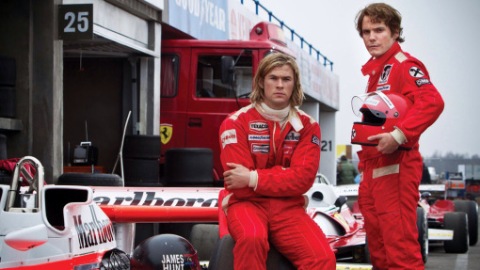 In 1976, little Opie Taylor himself Ron Howard starred in the Roger Corman car chase movie called Eat My Dust, agreeing to be in the film if B-movie king Corman would let him direct his own picture down the line. A year later, Corman made good on his promise and he let Howard direct Grand Theft Auto, his own car chase comedy tailored for the drive-in crowd. Several years and A-list movies later, it seems that the speed demon that lurks within Howard still hasn’t been tamed. Racing into theaters just in time for awards season is Rush, a stylish and sexy Formula One action-drama that also happens to be based on the real-life rivalry of James Hunt and Niki Lauda. From the time the green light flashes and those Formula One racecars roar to life, it’s clear that Rush is trying to blast itself straight into Oscar gold. While the melodramatic pauses that break up the tightly edited and sleekly framed action sequences might prevent Academy members from voting it into the Best Picture category, the film is a technical wonder, featuring screen-shredding crashes and sound work that kicks up the loose popcorn and Sour Patch Kids that are stuck to the theater floor. There are also the central performances, especially from newcomer Daniel Bruhl, who speeds off with nearly every single scene he struts steps into.

Picking up in 1970, Rush introduces us to lowly Formula Three racers James Hunt (played by Chris Hemsworth) and Niki Lauda (played by Daniel Bruhl), who quickly develop a fierce rivalry on the track of the Crystal Palace circuit in England. From 1970 to 1976, the British party boy Hunt and the all-business Austrian Lauda battle to enter the ranks of the Formula One drivers. In 1976, their rivalry was pushed to the breaking point as they went head-to-head in the Formula One races, risking their lives one race at a time to become the world champion. Meanwhile, their rivalry begins to spill over into their personal lives as Hunt struggles to hold on to his wife, supermodel Suzy Miller (played by Olivia Wilde), and first-place holder Lauda grapples with the fact that Hunt is breathing down his neck for the number one. The relationship between Hunt and Lauda takes a curious turn when Lauda is involved in a horrific car wreck that leaves him with third-degree burns covering his most of his face and badly damaged lungs. While fighting for his life, Lauda watches as Hunt closes in on the number one spot, which causes Lauda to make a speedy recovery and get back in the tournament.

Like most car films, Rush explores those who truly feel alive when they are defying death at over 100 miles per hour. Being a sports movie, the film never veers into existential terrain like such efforts as the recent art house thriller Drive or the high-octane cult-classic Vanishing Point. Howard and screenwriter Peter Morgan are more intrigued by the blistering rivalry between these two drastically different personalities and how, in the end, they actually needed each other. They balance the rat-faced geek vs. handsome jock act quite well, slipping it into tightly edited race sequences that make you feel like you’re squeezed into the driver’s seat with Hemsworth and Bruhl. Most thrilling are the races set against torrential downpours, placing us behind the helmets of Hunt and Lauda as they frantically search for a way to outdo the other. With visibility a blur and the engines rupturing our ear drums, you can’t help but admire these men as they put their lives on the line for a chance to stand above a cheering crowd and spray champagne into the air. What truly astonishes is the calm demeanor and nonchalant boldness of these men as the hop behind these mechanical beasts. They seem invincible, but Howard reminds us that they are flesh and blood through compound fractures and the fiery crash that almost takes Lauda’s life. 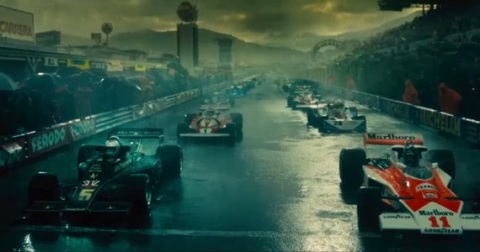 Bringing these two fearless daredevils to life are the brilliant Bruhl and Hemsworth, both of which settle quite nicely into the skin of their characters. Hemsworth sharpens his acting abilities as the playboy Hunt, who stumbles around the racetrack with a cigarette dangling from his mouth and a chugging a bottle of booze like he may never be allowed another drink. He’s irresistible to women, who get weak in the knees over the self-assured smile he flashes their way, and everyone seems to genuinely enjoy his presence when he steps into the party. The only time he ever shows any sort vulnerability is when he vomits before a race or when he is faced with the possibility that he may not get sponsored. At the other end of the spectrum is Bruhl’s Lauda, a squeaky clean stickler for the rules who is early to bed and early to rise. He rises to fame through money and by barking orders at the bewildered mechanics wondering just who the hell the guy thinks he is. He’s cold, calculating, and absolutely relentless in trying to keep Hunt down, spending every single solitary second tinkering with his car. Of the two men, Bruhl is the one who comes out on top, giving a top-notch performance that you just can’t take your eyes off. Don’t be surprised if you see his name among the Best Actors list when the nominees are announced.

With so much focus on the complicated relationship between Hunt and Lauda, Howard seems to be largely uninterested in adding a spark to each man’s personal life. Sure, we catch glimpses of Hunt’s crumbling marriage but it only gets maybe five minutes of screen time, and Lauda’s devotion to Alexandra Maria Lara’s Marlene Knaus is seen only through the silent glances that they continuously share. Wilde and Lara try to rise above their underdeveloped roles by hovering around television screens and holding their breath for their warring speed junkies, but none of the behind-closed-doors melodrama comes close to matching the breathless exhilaration of the races. Further muting the drama are the raw violin musical cues from composer Hans Zimmer, who contributes a beautiful but oddly mathematical score to deepen the impact of the emotional heart-to-hearts. Overall, as a study of ego and rivalry, Rush is a crackling triumph one could enjoy again and again. It finds Howard delivering on all the pedal-to-the-metal action that you’d expect from a film called Rush, and you simply won’t be able to pry your eyes off all that handsome cinematography. As an A-list crowd pleaser, this one should rocket right to the top of your must-see list.