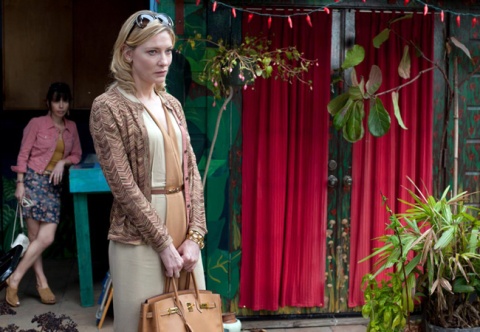 Since 2007’s unremarkable crime drama Cassandra’s Dream and 2008’s sultry love triangle Vicky Christina Barcelona, Woody Allen has reverted back to making cutesier dramedies like Whatever Works, You Will Meet a Tall Dark Stranger, the superb Midnight in Paris, and To Rome with Love. Now well into his seventies, Allen continues to make one movie a year to keep busy. In 2012, he snagged an Academy Award for Best Original Screenplay for his work on the enchanting Midnight in Paris, a win that you’d think he would have ended his career on, but he continues to push forward. I’ll be honest, I really worried that Midnight in Paris might be the last great film of Allen’s career, but I’m so pleased to say that the persistent writer-director blindsided me with Blue Jasmine, a stinging art-house portrait of a woman who had everything and ended up with nothing. With most of the comedy dropped, Allen builds to a climax that is sure to freeze you in your seat for a solid few minutes. Blue Jasmine is already a sobering slap, but it is made all the more captivating by a devastating Cate Blanchett, who will certainly have her name in the Best Actress category at the Oscars.

Blue Jasmine begins with Jasmine (played by Cate Blanchett) arriving in San Francisco in the wake of a nasty divorce and a financial scandal that led to her wealthy husband, Hal (played by Alec Baldwin), committing suicide. Broke, angry, and alone, Jasmine shacks up with her blue-collar sister, Ginger (played by Sally Hawkins), with whom she shares a rocky relationship. In the past, Hal let Ginger and her ex-husband, Augie (played by Andrew Dice Clay), in on a faulty investment deal that left the couple broke. As Jasmine tries to compose herself and restart her life, she meets a wealthy California Congressman Dwight Westlake (played by Peter Sarsgaard) at a party. The two quickly fall in love and plan to marry, but Jasmine’s dark past comes back to haunt her. Meanwhile, Ginger, who is set to marry the big-hearted grease monkey Chili (played by Bobby Cannavale), strikes up a romance with seemingly nice-guy Al (played by Louis C.K.), who has a secret of his own.

Based upon Tennessee Williams’ A Streetcar Named Desire, Blue Jasmine initially comes on like a typical Allen film. Blanchett’s character is presented as a nervy and neurotic mess looking for any ear that will listen to her spew her tragic life story. She flies first-class even though she doesn’t have a penny to her name and she constantly reminds her modest sister that Uncle Sam took everything from her, even her precious furs. When she lays eyes on where she will be staying, she fights back vomiting and musters the thinnest compliment imaginable. When her angst becomes too overwhelming, she rushes for a bottle of vodka, pops a Xanax, and starts mumbling to herself about her lavish past with a philandering millionaire who showered her with expensive gifts to blind her to his unfaithfulness. She makes the viewer cringe as she scoffs at Chili, who she views as a loose cannon deadbeat who will never be able to provide for Ginger, even though Chili desperately tries to be as warm to Jasmine as he can. At times, you almost get the sense that Allen is concealing the really brutal stuff behind a romantic comedy/midlife crisis mask, but we are never entirely sure how vicious this is going to get. Even though she is highly unlikeable and about as self-absorbed and pretentious as you can get, we still oddly root for Jasmine to get her life back together and find love. It’s hard to find a scene in Blue Jasmine that doesn’t have Jasmine herself a red-faced, withering mess fighting off the creepy advancements of a dentist and Chili’s buddies and throwing a pity party.

The true power of Blue Jasmine rests on the slender shoulders of Cate Blanchett, who gives the performance of her career as the equally pathetic and detestable Jasmine. Watching her try to go from swanky socialite to receptionist with absolutely no skills to get by is gripping every step of the way. You hate her when Allen flashes back and shows her blowing off the beaming Ginger and Augie as they pop by New York for a visit and you stand behind her hope as she lingers by the telephone waiting for the dashing Dwight to call her up. There is something admirable in her attempt to finish school and learn how to use a computer, but this drive is done in by the shallow possibly of returning to the life of luxury with Dwight. Hawkins gives a big-hearted performance as Ginger, Jasmine’s sister who is constantly being berated by Jasmine over her job, living conditions, and choice of men. You really have to pat Ginger on the back for her kindness, especially when it is revealed that Jasmine barely acknowledged her existence when she was living high in New York. Bobby Cannavale is a delight as Chili, Ginger’s rough-around-the-edges fiancé who tries to kid with Jasmine, but always ends up in a war of words with the fallen queen. Louis C.K. turns up as a lovable stereo installer who just can’t seem to get enough of the bubbly Ginger. Peter Sarsgaard’s Dwight is a nice upper-class gentleman with big dreams, but even his soft personality isn’t immune to the lies that Jasmine is spinning. Explicit comedian Andrew Dice Clay gives a dramatic performance as Ginger’s ruined ex-husband, Augie, who fell into some money and was then taken for a ride by Hal. Recent Allen regular Alec Baldwin gives a soft-spoken performance as the crooked philistine businessman Hal who is seen running around on Jasmine mostly in flashbacks.

With such a serious story, Allen tries to lighten the mood early on with some of his trademark dry wit. But by the last fifteen minutes of Blue Jasmine, he drops any attempt to cushion his blows and dishes out a one-two punch that sends Jasmine to the brink of madness. I must say, Allen unleashes a series of plot twists that catapult Blue Jasmine to the forefront of Allen’s massive body of work. I was left speechless, paralyzed, and most of all, I was thrilled to see Allen shrewdly serve up an ice-cold plate of reality to a character that just kept trying to turn a blind eye to it. Allen is ever careful in the way he allows these prickly twists to reveal themselves, a testament to his skills as a writer. Overall, in years past, Allen has said that he loathes reality and that he prefers the fantasy realm. With Blue Jasmine, Allen seems to have hardened and embraced the idea that there are some seriously crushing realities in the world and they can have some serious consequences. Blue Jasmine is a masterpiece from a man in the twilight of his career and one of the best films I have seen in 2013 so far.