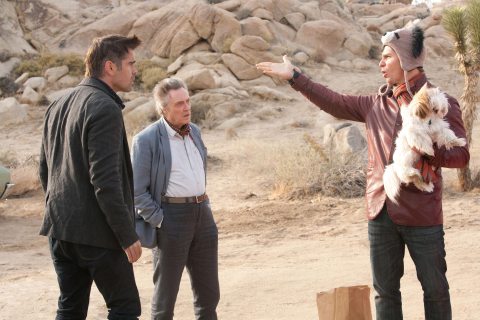 I wish that Martin McDonagh would direct more movies. We haven’t seen much of the Irish screenwriter and director since his small but darkly hilarious 2008 film In Bruges, the scrappy hit-men-on-holiday thriller that brought out the funnyman in Colin Farrell and Brendan Gleeson. In Bruges turned out to be one of the strongest films of 2008 but it was sorely overlooked when the “Best of the Year” lists were published. After a lengthy wait, we finally have Seven Psychopaths, the equally hilarious and shockingly gruesome send up of the gangster genre and Hollywood action vehicles. With the tongue and jaw of Quentin Tarantino and enough gore to make any member of the splat pack blush, Seven Psychopaths is a minor effort, one destined for cult popularity and late night viewings with your friends. To be fair, there is nothing wrong with its instant cult status but it certainly makes the film a bit alienating to the casual viewer. While there is plenty to love in Seven Psychopaths, there are a few little annoyances with the script that prevent it from achieving the greatness of In Bruges, but the star power is McDonagh’s greatest strength here and he more than allows Farrell, Sam Rockwell, Christopher Walken, Woody Harrelson, and Tom Waits to unleash their inner freaks.

Seven Psychopaths introduces us to Marty (Played by Farrell), a struggling screenwriter with a massive drinking problem. He spends his days in sunny Los Angeles with his buddy Billy (Played by Rockwell), an unemployed actor who kidnaps dogs with Hans (Played by Walken), a seemingly mild mannered man with a violent past. Hans and Billy then return the stolen pups to their owners and claim the rewards. After Hans and Billy kidnap a Shih Tzu that belongs to unhinged gangster Charlie (Played by Harrelson), Billy, Hans, and Marty go on the run from the ruthless gangster who will do anything to get his dog back. Meanwhile, Marty is scraping for ideas for a screenplay he is writing called “Seven Psychopaths” and seeking out individuals who consider themselves “psychos.” Along the way, he encounters Zachariah Rigby (Played by Waits), who traveled around with his wife killing serial killers and a masked vigilante who targets high-ranking members of the mob. As all of their paths cross, the bullets begin to fly and dead bodies stack up.

While the script is packed with plenty of comedic banter between all these wackos, Seven Psychopath hits a snag in the way it chooses to handle some of the characters. Olga Kurylenko shows up briefly as Charlie’s girlfriend Angela and Abbie Cornish is the in the mix as Marty’s fed up galpal Kaya but neither are given very much to do. While the death of one of these female characters is used to comment on the way that women are handled in action movies (it is hilariously dissected), I would have really loved to see one of them get down and bloody with the boys but that never happens. There is also another main character that I think was grossly mishandled and should have played a bigger part in the film, especially after the taste that we get of him. It is tough to discuss these flaws because Seven Psychopaths is just loaded with twists and turns that add to the fun, especially with its characters. I also think that when the characters step out of the sunny Los Angeles streets, things don’t run as smoothly as McDonagh thinks they do. There is still something to be said about the way that McDonagh spirals towards the ending, teasing us with ideas of a grand gunfight and characters dying in a slow-motion hail of gunfire, all while doing it behind a never-ending sea of hysterical one liners to keep things playful. 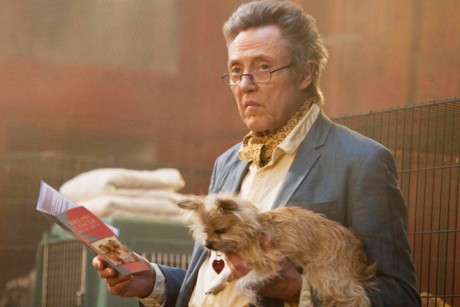 Seven Psychopaths is never ashamed to be a bloody character piece, one that has plenty of emotion weight behind each character. Marty wins us over almost instantly as a scribe perpetually recovering from the night before, shaking himself out of a hangover with a freshly cracked beer. He is basically the only (semi) normal one of the bunch and his reactions to the sudden violence thrown into his world are insanely realistic and knee slapping. Rockwell continues to prove why he is a talent to be reckoned with as mile-a-minute Billy, the eager chum who wants so desperately to help with Marty’s new screenplay. McDonagh hands him all the best lines of the film and he’s the one who gets to rant and rave about how he wants their situation to end. Walken is his usual self as Hans, a crafty old bat who just wants to take care of his sick wife. At times, Walken seems to be playing a cartoonish version of himself but he has never been as bad ass as he is at the end of this film (his reaction to someone aiming a gun at him is classic). Harrelson is a welcome presence as lunatic gangster Charlie, who will do ANYTHING to get his beloved dog back. He flits between menacing and hilarious in the blink of an eye, bring that demented gleam in his eye that we saw in Natural Born Killers. Rounding out the main characters in Waits as Zachariah Rigby, who gets probably the most shocking sequence of the entire movie. His character is as inspired as they come and the way that McDonagh weaves history into his character is downright brilliant.

While In Bruges certainly had its fair share of blood, Seven Psychopaths brings the blood, the guts, and splattered brains. There are jolting fits of violence and sudden confrontations that would make Tarantino and Robert Rodriguez as giddy as as schoolgirls. The way that the film introduces us to each “psychopath” is also pretty inspired, some of them emerging from Marty’s own screenplay while others joining the “real world” madness. It may be gratuitous and it may be gonzo but Seven Psychopaths can catch you off guard with its serious moments, a trick that allows the film to linger a little longer than you may anticipate. Be prepared to be knocked down a peg here or there and be even more prepared to actually feel it. Overall, it may get a bit jumbled from time to time and you may need a second viewing just to put it all together (there are a lot of characters and stories here), but Seven Psychopaths is a witty and left-of-center comedic satire that, once again, leaves me wanting more from Mr. McDonagh. I just hope we don’t have to wait another four years for him to grace us with his presence. That is just too long to make us wait!