I think that most critics and horror fans would all agree that Robert Wise’s 1963 chiller The Haunting is the king of haunted house films. Adapted from the novel by Shirley Jackson, The Haunting is a psychological spookfest that immensely enjoys developing its characters before it slow burns into a seriously terrifying blaze of unhinged madness and supernatural bangs. Reluctantly to get flashy with its special effects, Wise keeps The Haunting down to earth with only ghostly whispers just in the other room, shadowy faces crawling across the wall, and a buckling door, all of which scare the viewer more than a ghostly specter manifesting ever would. While it certainly won’t go over big with the blood and guts crowd, Wise crafts an arty and classy character study that certainly pushed the envelop for its time. While The Haunting didn’t initially blow me away when I first saw, repeated viewings and readings on the film have deepened my appreciation of Wise’s vision. The understated style of the film was the ultimate shock for me, that Wise was able to scare us so badly while barely lifting a finger. You’ll never hear knocking the same way again.

The Haunting begins with a lengthy back-story of Hill House, a sprawling mansion that has seen its fair share of suicide, death, and horror over the years. The film then speeds ahead to present day with Dr. John Markway (Played by Richard Johnson), a paranormal investigator, searching for supernatural evidence at Hill House. He has invited three other guests, Hill House inheritor Luke Sanderson (Played by Russ Tamblyn), psychic Theodora (Played by Claire Bloom), and supernaturally sensitive Eleanor Lance (Played by Julie Harris), to join him in his search. As the group settles in, they are given the history of Hill House and taken on a tour of the massive structure. While most of the occurrences are debunked instantly by Dr. Markway, the night unleashes horrors beyond the group’s imagination. To make things worse, Eleanor begins to loose her grip on reality and becomes convinced the house wants her to stay. Things go from bad to worse when Grace Markway (Played by Lois Maxwell) shows up to make sure her husband isn’t having an affair.

Right from the get go, Wise makes sure we know that Hill House is the star of this show. The house is certainly a character here as Eleanor constantly complains that the house is watching her and that it is demanding that she stay there forever. While it seems to have some ghostly spirits wandering its halls, the house itself appears to spring to life as doors swing shut, horrific banging can be heard echoing through the halls, and faces appear in the walls. We don’t need the characters to tell us that the house is evil, all we have to do is take a look around. The real beauty of The Haunting comes in the way it handles its supernatural inhabitants. There is no elaborate monster waiting to leap out of a darkened closet or damp basement and there is no doorway to Hell waiting under the stairs. It just seems like it is a home stuffed with bad energy and that is creepy enough for me. A good majority of the time, I wondered if the home was truly haunted or if one of the other guests had a sick sense of humor and was just out to give Eleanor a heart attack. For a while, Wise allows us to believe that I must say it adds a bit of comfort before he really allows his spirits to have their hair-raising fun. 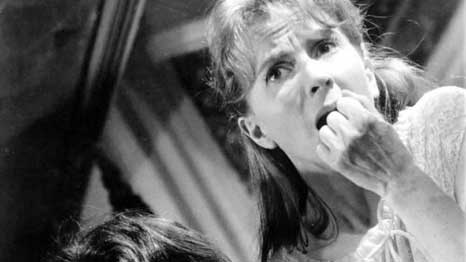 When Hill House isn’t busy stealing the show, Wise keeps his camera aimed at the splendid Harris and Johnson. Harris is unforgettable as the emotionally fragile Eleanor, who falls apart at every little bump or whisper. She is incredibly naïve and repressed as she longs for the affection of Dr. Markway. Johnson never ceases to amaze as quickly tries to explain away all the activity that is taking place around Eleanor. He probes her inner demons and really digs deep into why she seems so emotionally unstable. Bloom holds her own as the lesbian psychic Theodora, who pines after the worrywart Eleanor. Wait for the scene in which a loud banging noise has Eleanor jumping into bed with Theodora. You’ll see why it raised a few eyebrows at the time of its release. Tamblyn is mostly a background player, a hard-drinking playboy who seems more interested in turning Hill House into his own private Playboy mansion rather than really getting to the bottom of anything substantial. When his fear claws its way to the surface at the end, he sure does make us feel it. The only one who I can honestly say is underused is Maxwell as John’s suspicious wife, Grace. Her character seems like it is only there to create more pandemonium but it sure is effective pandemonium. I just would have liked to see more of her.

I can’t praise The Haunting enough for showing us just how effective the tool of atmosphere can really be. Atmosphere is everything in a horror film and The Haunting has plenty to go around, that I can assure you. There is no doubt that the lengthy character development at the beginning is exhaustive but it pays off when the tragic climax freezes our blood. Wise adds another supernatural layer by the way he uses his camera throughout the course of the film. At one point, the camera zooms from the highest point of Hill House down to the face of Eleanor. Wise also twists and turns his camera while shooting the interior of the house, almost distorting it in small ways and making it seem otherworldly. Released in 1963, there is no doubt that the vague sexual repression and explicit lesbianism struck a chord with viewers. Intelligent and eloquent, The Haunting rightfully earns its spot among the horror elite. It dares to show us that very little can actually be quite a bit, something that more horror directors should pay attention to. Overall, The Haunting is one of the scariest, most unsettling films of the 1960s, one that rewards with multiple viewings and continues to terrify to this very day.

The Haunting is available on DVD.