Of all the classic Universal monsters, the most tragic and touching is the Wolf-Man, a lycanthrope who by moonlight is transformed into a beast from Hell. One of the most famous classic monsters next to Dracula and Frankenstein’s Monster, The Wolf-Man is one of the most atmospheric films that Universal unleashed upon audiences. Played with a wounded scowl by Lon Chaney, Jr, The Wolf-Man is an essential horror film for fans of the genre, one that will scare you to your core. If you wish to read Corinne Rizzo’s review of The Wolf-Man, click here. Without further ado, here are Anti-Film School’s mini reviews of The Wolf-Man sequels and the first mainstream werewolf film. Anti-Film School is not responsible for the howling at the moon and spontaneous hair growth that may occur after reading… 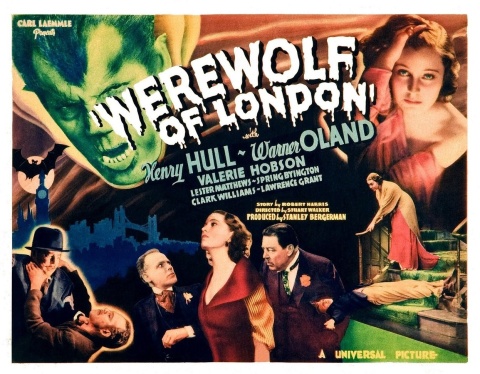 Renowned British botanist Wilfred Glendon (Played by Henry Hull) takes a trip to Tibet to find the rare mariphasa plant and while searching the countryside; a strange, wolf-like creature suddenly attacks him. Despite the attack, Wilfred manages to make it back to London with a small sample of the mariphasa but he soon suffers a horrific transformation when the moon is full. As Wilfred races to understand the bizarre transformation, a mysterious man named Dr. Yogami (Played by Warner Oland) approaches him and claims they have met before.

Technically the first mainstream werewolf horror film, Werewolf of London certainly does set the bar high for the supernatural subgenre. The film is rich with plot and character development, two traits

that actually cause the film to lag in places. The film lacks the hazy gothic atmosphere that the Lon Chaney, Jr. Wolf-Man had but the film still manages to be quite unsettling. The make-up effects in Werewolf of London are not as heavy on the wolf features and actually retain a more demonic quality with flashes of humanity, something that actually makes them creepier than Chaney’s famous wolf-mug. Hull himself isn’t nearly as tragic as Chaney’s Talbot and frankly, I didn’t really care for his snippy demeanor when he hovered over his precious plants in his lab. As the werewolf, he certainly is memorable, leaping out windows and even preparing himself for the nippy London weather with a scarf and coat.

As far as the secondary players go, Warner Oland is appropriately suspicious as Dr. Yogami. I absolutely loved how he played into the movie and I especially liked the reveal at the end, even if it is fairly easy to see the twist a mile away. Valerie Hobson is also present as Lisa Glendon, Wilfred’s wife who desperately wishes he would step away from his work and into her loving arms. The film embraces a smidgeon of comedy in the middle of the film with the werewolf crossing paths with two old lushes, who hoot and holler when they catch a glimpse of his protruding fangs. Overall, it is a shame that Werewolf of London has been left forgotten in the shadow of The Wolf-Man, but the cold hard truth is the film just isn’t as entertaining and heartbreaking as the Chaney classic. It does, however, deliver the spooks and that is the most important part of the film. It also happens to be a very dapper affair. Grade: B

Several years after the events of The Wolf-Man, Larry Talbot (Played by Lon Chaney, Jr.) is awakened by a duo of grave robbers on an evening when the moon is full. As moonlight falls on his skin, Talbot quickly morphs into the Wolf-Man and murders the two men. The next day, the dazed Talbot is discovered by the police and taken to Dr. Mannering (Played by Patric Knowles), a local doctor who believes that Talbot may be insane. Talbot begins warning Dr. Mannering of his curse and that he desperately needs to be cured before the next full moon. Frustrated no one will listen to him, Talbot escapes the hospital and seeks out Dr. Frankenstein, who may be able to end his terrible curse. As his search continues, Talbot accidentally discovers Frankenstein’s Monster (Played by Béla Lugosi), which has been buried in ice for many years. 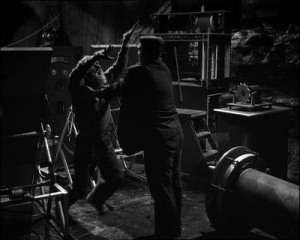 The first forty minutes of Frankenstein Meets the Wolf-Man has all the makings for a horror classic. It’s atmospheric, loaded with eerie images, and surprisingly gruesome attacks for an early Universal horror flick. The film quickly looses some of that uneasy terror when it skips off to Frankenstein’s castle and unleashes Lugosi’s Monster. You can’t help but get the feeling that Lugosi is almost mocking Karloff in the way he waves his stiff arms around and moans like a family friendly ghoul. Hell, Herman Munster is more terrifying than Lugosi’s Monster. Then there is the middle section of the film, which is equally troubling. The story seems to run out near the center and the film just plods along killing time until these two titans of terror duke it out for a broad. It fills itself out with a head-scratching musical number that completely yanks the gothic atmosphere right out of the picture. Luckily, the film gets back on track with the final showdown that pits the angry Monster against the Wolf-Man. It’s a pretty satisfying fight even if it does find the two ghouls wrestling around on the ground for five minutes as things blow up around them. Still, it is pretty neat that they actually clash for a decent amount of time.

Frankenstein Meets the Wolf-Man is technically the first sequel to the original 1941 Wolf-Man and the first half of the film pushes the story along in a pretty fascinating way. Chaney is still top-notch as Larry Talbot/The Wolf-Man and his anguish is pretty chilling. Sadly, there is only so much I could take of his whining and by the end, I just wished he’d turn back into the Wolf-Man so I wouldn’t have to listen to him whine anymore. Patric Knowles steps in to play the mad doctor who isn’t as mad as some of the previous Universal kooks. Ilona Massey steps in as Elsa Frankenstein, who begins to fall for sad sack Larry. She basically acts as the boxing ring bell that has the two monsters swinging their claws at one another. Overall, if Frankenstein Meets the Wolf-Man had continued on the path it started on at the beginning, the film would have been a horror knockout. Instead, the film is KO’d after forty minutes by Lugosi’s bizarre turn as the Monster, Chaney’s relentless sobbing, and an absolutely pointless musical number. Luckily, the first forty minutes are a keeper and that showdown has some sparks. Grade: B

After a string of brutal murders in a local London park, Scotland Yard detectives begin to fear that the murderer is actually a werewolf. As the news of the murders spreads, the young Phyllis Allenby (Played by June Lockhart) begins to fear that she may be the killer after she discovers that there are werewolves in her family tree.  As fear spreads across London, Phyllis’s fiancé Barry (Played by Don Porter) and her aunt Martha (Played by Sara Haden) try desperately to convince her that her fear is all in her head.

Fueled more by suspense than all out terror, She-Wolf of London leaves a good majority of the supernatural spooks on the cutting room floor and opts for psychological fear. What remains firmly in tact 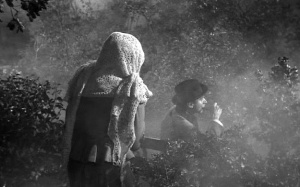 is the foggy gothic atmosphere that The Wolf-Man was very fond of and for the most part, the atmosphere adds a few chills. Much like Lon Chaney, Jr, Lockhart plays Phyllis as a sad and tragic figure desperately pleading for help for her curse.  At only an hour, we are able to give Lockhart a hefty serving of our sympathy and she never wears on us. Porter is solid as the concerned fiancé and Haden is wonderfully suspicious as Martha. Also on board is Jan Wiley as Carol, Phyllis’s clueless cousin who is consistently upsetting the sad sack.

At only sixty-one minutes, She-Wolf of London is brief and right to the point. The scenes that find a hooded she-wolf creeping out of the park’s tangled brush are indeed spooky, the hooded figure almost resembling a bloodthirsty apparition on the prowl. The middle twenty minutes of the film are sort of dry and you will find yourself rushing the film into the big reveal at the end. Much like Frankenstein Meets the Wolf-Man, She-Wolf of London also features some hair-raising attacks that have a particularly bloody outcome. Overall, director Jean Yarbrough puts a unique twist on the werewolf feature that is quite fitting for a post WWII horror film dealing with the supernatural. I dare you to get those foggy attacks out of your head. Grade: B-

Werewolf of London, Frankenstein Meets the Wolf-Man, and She-Wolf of London are all available on DVD.