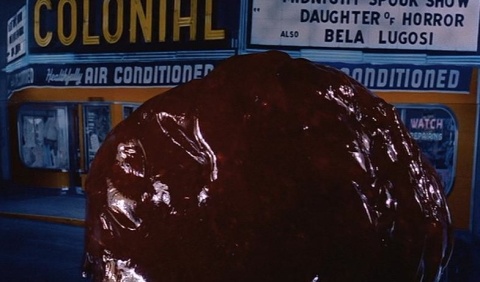 For a science fiction film about a giant gelatinous blob from outer space, Irvin Yeaworth’s 1958 chiller The Blob is an awfully tedious film. Sure, it is a goofy concept and the idea of it makes it a film that would be great for a campy sleepover double feature but it is a surprisingly disappointing experience. The main attraction of The Blob is the drive to see something that is the true definition of cheap. Shockingly, the special effects sequences in The Blob are not nearly as primitive as you would hope they are. Believe it or not but The Blob is played pretty straight, another science-fiction film from the Cold War that uses a big red consuming mass to mirror the fears of communism spreading throughout the United States. All that is missing is a giant yellow hammer and cycle stamped on the side of the blob! In my opinion, there are more 50’s and 60’s science fiction/horror films that mirror the times better than The Blob, but you’d think The Blob would put a slight creative and fun spin on the subject matter. Oh well, at least it stars a young Steve McQueen and has a pretty awesome theme song!

The Blob picks up in July 1957, with teenager Steve Andrews (Played by Steve McQueen) and his girlfriend Jane Martin (Played by Aneta Corsaut) enjoying a romantic evening parked at Lover’s Lane. Suddenly, they see a meteor streak across the sky and land somewhere close to where they are parked. Meanwhile, an elderly man (Played by Olin Howland) hears the meteor land near his home and he ventures out into the woods to investigate. When he finds the meteor, he pokes the space rock with a stick, which causes it to break open and reveal a strange gelatinous substance that attaches itself to his stick. The goo quickly slithers its way up the stick and attaches itself to the terrified man’s hand. Steve and Jane stumble upon the old man and quickly take him to the local doctor’s office. They show the man’s hand to Dr. Hallen (Played by Stephen Chase), who quickly determines that he will have to amputate the man’s arm. The blob hastily gobbles up the old man and everyone else working at the clinic, leaving Steve and Jane running to the local police station to inform the authorities about what they have seen. The authorities dismiss their story but soon, more people begin mysteriously disappearing and the blob begins growing to a devastating size.

The Blob is the furthest thing from spooky, scary, or thrilling, which I guess shouldn’t surprise anyone considering the monster is essentially rolling Jell-O. Director Yeahworth makes fairly decent use of small town America under attack and he does construct one memorable sequence in a movie theater. The movie theater sequence is probably the most iconic scene from The Blob, the one that is the most effective in making us feel helplessly claustrophobic and making our skin crawl. It also helps that we get to see the blob in color, allowing us to really get a good look at all the nastiness of the alien antagonist. The Blob does get by with what it is saying underneath the reddish surface, making it smarter than you ever thought it would be. The blob itself becomes a metaphor for consuming communism and increasing fear of the atomic age, as the blob literally consumes any poor sap that happens to be in its path. At the same time, The Blob gets lost in the other science fiction films of the time, most of which were intellectually superior. 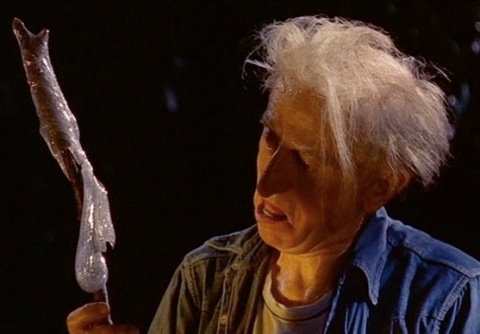 For those of you dying to catch a glimpse of a younger Steve McQueen (or Steven McQueen, according to the opening credits), The Blob is the film for you. The Blob is the first staring role for the action hero and he plays his part like he may never get another shot to be in front of the camera again. McQueen takes on the role of All-American hero, a cliché that was incredibly popular in films like this. He isn’t emotionally complex or deep, just a teen begging to be heard by the skeptical adults around him. He gets his typical partner in crime, the damsel in distress Jane. Jane doesn’t ever really leap out at you, as she is just there to be the love interest of Steve. McQueen and Corsaut do get a number of fairly romantic scenes throughout The Blob, all which are more effective than any of the scare scenes. John Benson shows up as Sergeant Jim Bert and Earl Rowe shows up as Lt. Dave, both who are reluctant to believe Steve and Jane but finally do come around, especially as events get more and more bizarre. All of the acting in The Blob is what you would expect out of a 50’s B-movie, all a bit over dramatic, cliché, and gung-ho heroic.

The Blob is without question for die-hard science fiction fans, those who have a soft spot for atomic age alien invaders. Originally released as a double feature with I Married a Monster From Outer Space, The Blob would make for a fun retro double feature night that is complimented with lots of beer. The climax of the film does gain some momentum and it does get a bit tense, but overall, the film is completely devoid of anything resembling tautness. Another reason to see The Blob would be to check out the above average special effects, all of which have held up with age and are surprisingly convincing. There are only brief moments where things look a little dated but they pass just as quickly as they showed up. While it is a cult film, The Blob does devour the intellectual crowd and could be called essential viewing for film students or those who have a strong interest in the history of cinema. As someone who has a sweet spot for B-movie schlock, I really wish that The Blob had some shoddier moments but I have to applaud the sturdy ingenuity on display. I may put up a fight but there are a handful of consuming moments to be found in this lumpy blob of a film.

The Blob is available on DVD.

The Blob does have one hell of an opening jingle by The Five Blobs. Give it a listen below. Warning: Anti-Film School is not responsible for any sudden dancing that may occur while listening to this song.