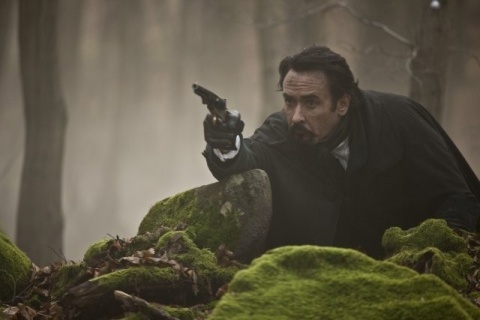 Throughout James McTeigue’s overcast thriller The Raven, I kept wondering what the film would have been like if it would have been approached in a much more serious manner rather than as a graphic novel that has come to life. The film, which cleverly uses Edgar Allen Poe as the hard-boiled detective to solve murders based around his own work, does have a pulpy storyline, one that you could very easily see illustrated out in comic book form but I felt like the film could have been much better if the filmmakers would have made it a little bit grittier and meaner. Instead, McTeigue instructs his actors to lightly flit around what look like leftover sets from Tim Burton’s Sweeny Todd while holding up lanterns to see through the CGI fog that is supposed to create a portentous atmosphere. The film also tries to lighten the already forced mood by having the superb John Cusack, who plays the boozy Poe, spew chuckle worthy one liners like he is a cleaned up Jack Sparrow on vacation from his Pirates of the Caribbean franchise. Despite these major flubs, The Raven does have a handful of moments that are moderately fun but they quickly fly off like a startled raven.

The Raven begins with the witty Detective Emmett Fields (Played by Luke Evans) showing up to a grisly double murder and quickly observing that the crime scene resembles a story written by the booze sipping Edgar Allen Poe (Played by John Cusack). After being taken into police custody, Poe is convinced by Evans to begin helping the police to catch the murderer before he strikes again. Poe also happens to be in love with the blonde and beautiful Emily Hamilton (Played by Alice Eve), who at a costume ball, is kidnapped by the murderer, sending Poe and Emily’s protective father Colonel Hamilton (Played by Brendan Gleason) into a frenzy to try to find her. As more murders stack up, Poe has to get inside the killers mind by using clues that he leaves at the crime scenes to find Emily before the deranged fan slices and dices her. But as the chase furthers, Poe begins to suspect that he may not live make it out of the investigation alive.

The Raven is the same old hack and slash whodunit that is dressed in all in black and sips brandy from a flask. The most inspired aspect of the film is the way the killer dispatches his victims by using the work of Poe. By far the most grisly is the death that is inspired by “The Pit and the Pendulum”, a scene that overflows with CGI blood that is flung directly at the audience. I’m stunned the filmmakers weren’t compelled to convert the film to 3D just to milk the effect even more. This is the exact problem with The Raven. It’s just gets too cartoonish for its own good and is overly concerned with its own outer appearance rather than making something that will really stick with us and, dare I say, disturb us to our core. Instead, it’s sleek when it should embrace a little dirt under its fingernails. I suspect that McTeigue, who directed the awesome 2006 comic book film V for Vendetta, never really snapped out of comic mode. McTeigue and screenwriters Ben Livingston and Hannah Shakespeare are all about images that look cool and speeding the story along to the next gruesome discovery, with everyone but Poe choking out simple dialogue that would seem more at home in big white speech bubbles protruding from their mouths. 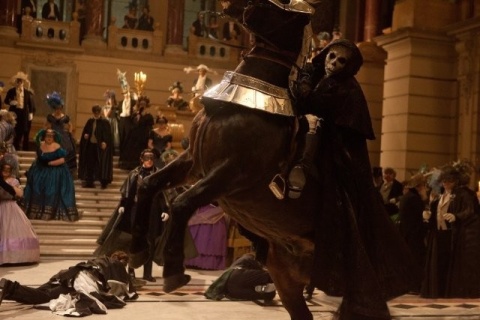 Of all the players in The Raven, Cusack hits it out of the park with his motor-mouthed Poe, who bursts with intelligent jabs at those who try to insult him and continuously spars with Colonel Hamilton, who despises the drunken Poe. Cusack is committed to Poe to the very end and really does his best to give him a little bit of depth and glassy-eyed emotion. He steals every scene he’s in and he makes The Raven a bit easier to sit through without your mind wandering away from the story. Cusack is a magnetic actor and I admit that I really do enjoy his work. My one compliant with his performance is that I wish it were smudged with a little bit more intensity at times but the screenwriters would like him to be a jester. Brendan Gleason sneaks by as Colonel Hamilton, although he isn’t given much more to do than to grumble on about his dislike for Poe and to yell “EMILY!” when he finds out she is missing. It’s a shame that Gleason’s talent was severely underused. Luke Evans plays the real hard-boiled detective in the film, but he just resorts to saying everything with in a gruff whisper. The screenwriters are disinterested in really fleshing him out and he is relegated to just making speeches to groups of gung-ho police officers. Alice Eve is another minor standout and she does have a spark with Cusack, but we only see that spark in brief flashes before she is separated from Cusack for a good majority of the film.

The Raven is devoid of any tension, fear, or shock, all three things that are desperately needed within the film. It briefly thrills here or has us scoot to the edge of our seat there but sadly, McTeigue seems to think that if the whodunit thriller ain’t broke, don’t you dare do anything to fix it or even put a creative spin on it. Another disappointment of The Raven is the big reveal at the end, when we finally get to see the face of the killer, who ends up being a character that we’ve barely seen throughout the film. Maybe it would have been a little bit more of a bombshell if it was someone closer to Poe instead a distant background player we don’t give a lick about. The Raven couldn’t be any more by the books or worse, predictable even when it thinks you have no idea what is coming next. Maybe if The Raven had been a little more game to get its hands dirty rather than cover them up in all the CGI body fluids and atmospherics, things would have played out differently. Ultimately, McTeigue and The Raven are a little too soft and play a bit too nicely, which is a shame because Cusack came to have some devilish fun.