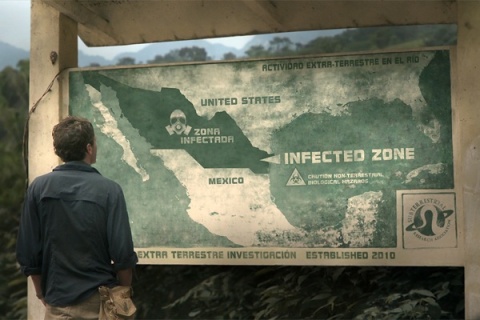 It is hard to believe that British director Gareth Edwards’ ultra low budget science fiction film Monsters cost only around $500,000 to make. Just take a look at the crisp cinematography, the dreamy score, and charred special effects and you will be absolutely staggered that he made so much out of so little. Edwards masks the low budget by turning Monsters into a character drama, one that only uses the alien invasion as a political backdrop for his two main characters. Heavily critical of the tense American views on immigration and illegal aliens, Monsters is a sharp jab at how some American citizens view our neighbors to the south. That being said, I more than believe that Monsters has its heart in the right place, exploring the idea that we fear what we don’t understand, but I wish Monsters wouldn’t have been so heavy handed with this message, taking advantage of every opportunity to point out what it is attempting to do. I also wish that Edwards had added a bit more action to the film. I enjoyed traveling with these characters and seeing all the nifty little touches along the way but I feel Monsters would have benefitted from a little more action. I say this because the night-vision shootout in the opening moments leaves the viewer shaken, battered, and wanting a hell of a lot more.

At the beginning of Monsters, we are told that a NASA deep-space probe crashed near the United States-Mexico border. In the wake of its crash, alien life forms begin to appear, causing the U.S. and Mexican armed forces to attempt to contain the infected area. The U.S. quickly puts up a massive wall to keep the towering creatures from crossing over onto American soil. Meanwhile, in San José, a young American photojournalist named Andrew (Played by Scoot McNairy) is asked by a wealthy employer to escort his daughter back into America. Andrew reluctantly accepts the offer and sets out to find the beautiful Samantha (Played by Whitney Able). The two strike up a friendship over the course of their journey, Andrew beginning to fall for Samantha, who also happens to be engaged. After getting mugged and loosing their passports, Andrew makes a shaky arrangement to have Samantha escorted to the American wall but the journey will take them through the infected zone and put their lives at risk. Or so they have been led to believe.

Monsters makes the wise choice to make the viewer feel like a tourist on Mexican soil, allowing us to wander around with the characters and take in the local culture. We are shown how difficult it is for these individuals who face constant attacks by the creatures. We see Mexican civilians mourning their losses while America offers little to no aid to the Mexican armed forces. It is this raw emotion that really takes its toll on the viewer and makes Monsters such an emotional journey. Electronic musician John Hopkins’ soaring score, at once dreamily inquisitive, intimate, and romantic, compliments partially destroyed cities and moist eyes of the mourners. It was also interesting to watch how the Mexican civilians have routed their daily lives around the constant problems with the extraterrestrial beings. I was hooked on Edwards’ camera bobbing around and showing me street signs that warn those who travel down that road to have a gas mask handy and indicating that we are near an infected zone. The eeriest is a gigantic sign that indicates just how enormous the infected area is, our heroes silently absorbing their risky situation.

Since the film has such a low budget, Edwards is forced to rely on his main protagonists to drive the film. They need to be convincing and engaging or else the film will loose us, as it can only go so far with the visitors-in-a-foreign-land approach. McNairy and Able do have a spark and it isn’t hard to see that the film is swerving into romantic territory. McNairy’s Andrew desperately tries to keep things as casual as possible, always trying to break the awkward tension between him and Samantha. Able’s Samantha is battling an inner conflict, trying to repress her growing feelings for Andrew, who bottles up a secret of his own. Together they face tense situations that never amount to much of anything, a close-encounter here and a false alarm there, Andrew always quick to whip out his camera and attempt to document what they are seeing. Only once do things really get deadly for the duo, but it is brief and we only really see the gruesome aftermath of what has panned out. I’m all for the subtle approach but I’d like to see why we are all so terrified of these creatures. All we ever really see them do it wander into a city here or pick up a car there, which adds a layer of minor disappointment to the road trip that is Monsters.

For a film that lacks a big Hollywood price tag, Edwards does an incredible job with the special effects, which were said to have been accomplished on his laptop. His aliens are a sight to behold and I’m reluctant to reveal too much about them, as they are one of the only real sources of mystery in the film. Things get very apocalyptic when the duo finally sets foot on American soil, a sequence that offers another minor surprise. As I said, Monsters is too ready to explain itself away to the viewer, refusing to keep its politics ambiguous. It’s not hard to decipher the message of the film if you’ve been filled in on the plot so I feel it was unnecessary to have the characters explain things further to us. For its handful of flaws, Monsters is still an above average science fiction drama, one with likable characters and lovely use of location (wait for the sequence where Andrew and Samantha spend the night at an Aztec pyramid). I just wish Edwards wouldn’t have shied away from tossing us around a little bit more. Monsters would be so much better if you were still recovering from it the next day.

Monsters is now available on Blu-ray and DVD.