“The book was better,” is our most common response to page-to-screen adaptations, and yet, one that I couldn’t honestly say as I left the theater this Friday. It’s rare that a film surpasses the novel it was based upon; Gary Ross’ The Hunger Games does just that. For those of you who haven’t read the novels, here’s a quick synopsis: Sometime in a dystopian future, a country called Panem stands where the USA used to be. A lavishly totalitarian capitol city rules over and systematically abuses 12 districts that generate the resources it needs to sustain its hedonism. As a reminder that rebellion is futile, two children are annually selected from each district to compete in the Hunger Games, a nationally-televised tournament in which the contestants fight to the death until only one victor remains.  Jennifer Lawrence (Winter’s Bone) sizzles as Katniss, the brave huntress from District 12 who volunteers to compete in the Games in her little sister’s stead.

Though Lawrence seems to have more chemistry with Kravitz than her pre-pubescent male opposites (and who can blame her?), Hutcherson’s Peeta is charming and likable. The film’s main disappointments come from its costumes, which look cheap and gaudy (I had hoped for avant-garde and futuristic), and from Hemsworth’s stiff and unconvincing Gale. Additionally, while I had hoped for more raw violence, jerky cinematography keeps the fight sequences purposely blurred and within its PG-13 boundaries. 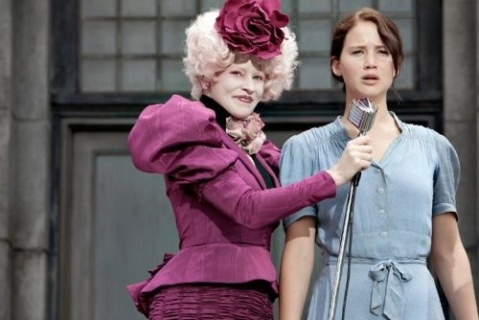 For viewers who loved the novel, this film won’t disappoint. Where Collins’ prose drags, the movie makes up for it in color, emotion, and crisp dialogue.  Additionally, the “Marxism and postcolonialism for kids” messages come through neatly without having to deal with Katniss’ annoying interiority.

Exciting, intriguing, and 40 billion times better than the drippy abortions that the Twilight franchise keeps pumping out, Hunger Games is a solid winner for Spring’s Best Blockbuster.