I honestly do not think I have ever seen a film that has been as grainy and gritty as Maniac, the splatter film told from the perspective of the pudgy schizophrenic Frank Zito, a man who prowls the shifty streets of early 1980s New York City and kills women. The film, often evocative of the Son of Sam murders from the mid 1970s, out grains films like The Texas Chain Saw Massacre, Halloween, and Henry: Portrait of a Serial Killer, a film that came shortly after Maniac but is far superior. You practically need a tetanus shot and two baths after you have watched this thing. Pretending that is it shining light on a deranged and shadowy mind, Maniac lacks any real depth, acting as just a random string of scenes where Frank stalks, murders, and maims his victims. After each segment, director William Lustig changes the setting, the victims, and then presses the repeat button. Maniac’s case is not helped out by the sneaking suspicion that this slightly seems like a fetish flick.

The premise of Maniac is quite simple. Frank Zito (Played by Joe Spinell) is a sweaty, overweight psycho who stalks women, murders them, and then scalps them. He shacks up in a tiny apartment in an unidentified burough of New York City. His tiny apartment is crammed with an assortment of weapons he uses to dispatch his prey along with countless creepy mannequins. Frank likes to dress the mannequins in clothing, nail the scalps he has collected to their heads, and sleep with them. Frank also engages in conversations with himself, usually acting as both himself and his deceased prostitute mother he is obsessed with. While out on a walk one day, Frank has his picture taken by a beautiful but utterly clueless photographer named Anna (Played by Caroline Munro). Frank tracks her down and instead of simply killing her, the two strike up a bizarre relationship that is unfathomable. When it seems that Frank has found love and may turn himself around, he begins repressing his urges to kill and it is only a matter of time before they break through the charismatic persona he is hiding behind.

One of the two parts that works in Maniac is the odd relationship between Anna and Frank. This adds some desperately needed anxiety to the film, we the viewers finding ourselves on the edge of our seat waiting for Frank to strike. It’s a clever move from writers C.A. Rosenberg and Joe Spinell who play on our fear that something is about to happen. It is also the only thing resembling a budding plot in Maniac, which is more concerned about getting to all the violence. The violence here has to rank as some of the most extreme you will ever see in a motion picture (aside from Cannibal Holocaust, Romero’s zombie flicks, and the work of Herschell Gordon Lewis). Credit should go to make-up and effects guru Tom Savini, who dreams up some truly nasty stuff that makes even the hardened viewers queasy. One scene, a sequence that has to be one of the most memorable moments in horror movie history and the most redolent of the Son of Sam, has Frank blowing the head off one victim at close range with a double barrel shotgun. It goes far beyond graphic, sickening, or shocking. It is downright fucked up in conveniently used slow motion. 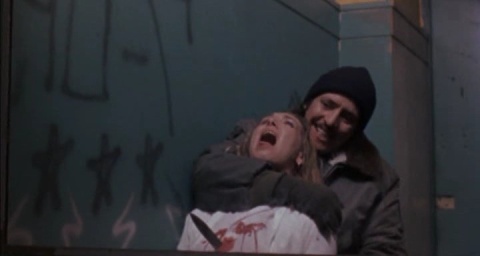 The other part that clicks in Maniac is the supernatural finale the film tacks on, making Frank’s last victim himself. He ends up succumbing to his own inner demons that wield his own weapons and giggle while they close in. Frank lacks much profundity and he is fairly simple to figure out. He shows flashes of repentance and scolds his own actions when he kills. While he is on the prowl and stalking his prey, he lets out grunts and growls that sound animal and orgasmic. It is ultimately the path of the paranormal that gets the juices flowing in Maniac, enveloping us completely into Franks distorted and damaged mind, allowing us to see through his eyes rather than just tagging along side while he takes lives. While the real world stuff is unsettling, it is Frank’s world that provides the much needed spooks.

Almost cinema-vérité in execution and shot with what had to be the oldest camera the director could find, Maniac exploits the seedy and decaying look of later 70’s and early 80’s New York City. You never really feel comfortable or truly safe in Maniac. I kept wondering where a police officer was, why that woman was walking alone, and who else was lurking in the shadows waiting to stick me up for my wallet. The film does an excellent job transporting the viewer but the lack of any protagonist trying to catch Frank is Maniac’s demise. Instead of drawing the film out with countless scenes of torture and prolonged death sequences, maybe they could have thrown in a hard-boiled detective racing to find the killer before he claims another life. All we get an out-of-place overhead shot of what is supposed to be a helicopter looking for Frank and quick glimpses of newspaper headlines that declare there is a maniac on the loose. Furthermore, no character outside of Frank is properly developed so when someone meets a messy end, it’s just unpleasant. It doesn’t affect us on any emotional level like it should. For as hard as it tries, Maniac ends up being surprisingly below average but don’t count out the finale, which has a few tricks, decomposing corpses machetes, handguns, shotguns, and switchblades up it’s flannel sleeve.

Maniac is now available on Blu-ray and DVD.