What do you get when you throw LSD dropping devil worshippers, shotgun packing children and old men, rabid dogs, zombies, and heaping piles of severed limbs into a blender? You get the trashy I Drink Your Blood, a grind house picture with an ADD plot and bug eyed acting. This everything-and-the-kitchen-sink film is a fun flick to watch when you and your friends are looking for a good film to laugh at between sips of beer. Hell, getting a nice buzz may actually enhance the quality of I Drink Your Blood, a film that would be right at home on a double bill with Sugar Hill or Rabid. Made in 1970, the film follows the perspiring, claustrophobic, and granular aesthetic that was heavily popular during this specific era. At times it is reminiscent of The Texas Chain Saw Massacre even though this came out way before Tobe Hooper’s nightmare was unleashed. And yet even though the film is absolutely awful, if you are like me and adore this strain of cinema, you will find yourself admitting that I Drink Your Blood is so bad it is almost, well, good!

A group of wacky Satanist hippies lead by the bloodthirsty Horace Bones (Played by Bhaskar Roy Chowdhury) roll into what appears to be a fairly conservative and largely abandoned small town. After the gang captures a local girl Sylvia (Played by Iris Brooks), who was watching the group perform a satanic ritual in the woods, they proceed to rape the poor girl. The next day, Sylvia stumbles from the woods, bloodied and rough up. She is discovered by Mildred (Played by Elizabeth Marner-Brooks), a woman who runs a local meat pie bakery, and Sylvia’s younger brother Pete (Played by Riley Mills). Mildred and Pete take Sylvia home to her grandfather Banner (Played by Richard Bowler), who swears he will get revenge on the group for what they have done to his granddaughter. Armed with a double barrel shotgun, he goes out to find the group, who has taken up shelter in an abandoned and supposedly haunted house. The group soon discovers Banner sneaking up on them and consequently he is the beaten, tortured, and force-fed LSD. Pete follows his grandfather to the house where he tries to rescue his grandfather and the two barely escape. While Banner recovers, Pete takes his grandfather’s shotgun and kills a rabid dog, taking its blood with a syringe and proceeds to inject it into a batch of meat pies. Pete then offers the meat pies to the hippies and soon after eating them, members of the group begin changing into rabid, infected psychos who just want to dismember anyone in their path.

Vaguely evocative of the Manson Family and part cautionary tale about the side effects of LSD, I Drink Your Blood is a repulsive gross out film with very little aptitude. It is never insinuating, as at one particular moment, the young and naïve Pete asks about LSD and a whole background is given on the drug. It doesn’t help that it packs the most outrageous plotline ever conceived. Yet it achieves cult status much like films like Burial Grounds, Zombie, Cannibal Holocaust, and I Spit on Your Grave. It has to be seen to be believed. That is if you can stomach it. Filled with pointless sex scenes (The film stops part way through to deliver for the nudity craving viewers) and graphic gore (In one scene, a leg is hacked off and it is a bit too real), it is no wonder this film was slapped with an X rating upon its release. 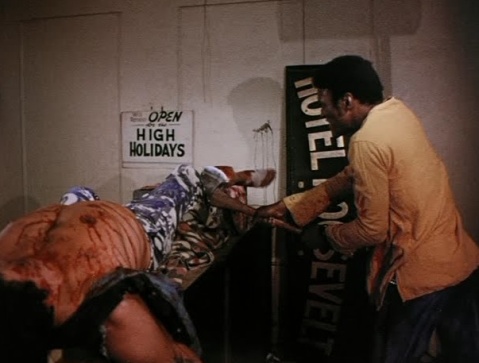 I Drink Your Blood is a film of memorable scenes rather than a substantial work of art. You will never forget a hoard of construction workers flailing through a field looking for someone to hack up. How about the moment with cult movie starlet Lyn Lowry (Of The Crazies fame) sawing off someone’s hand and carrying it around and examining it? How about the pregnant Satanist stabbing her own bulging, pregnant stomach? Or a mouth foaming psycho carrying a severed head around showing it to terrified citizens? Pretty sick stuff, huh? There are moments that have been influential (I’m fairly certain that Rob Zombie was inspired by the final firefight and added a nod to it in The Devil’s Rejects. He also samples a bit of the synthy score in his song “Feel So Numb”) and some that are harrowing (The final shot of the film sticks with you).

Unable to evaluate the film on intellectual terms (The film sparks no intellectual thought at all), I Drink Your Blood knows its target audience and everyone else can go to Hell. It is a sour concoction that manages to offend in almost every way imaginable and I’m convinced that is the only reason it was made. If you are deeply disturbed by animal cruelty, I’d stay far away from this (And Cannibal Holocaust). I found myself chuckling at some of the lunacy but I suppose I take these films on their own turf and the more extreme they are, the more the burrow their way into the soft spot I have for them. Yet I would never consider I Drink Your Blood a good film or recommend it to anyone looking for a movie to watch on a Friday night. The craftsmanship is amateur, the score is repetitive, and the acting cartoonish, I Drink Your Blood is for fans of this genre only and especially ones who understand how to approach this material. If your mission is to seek out the most extreme forms of cinema and try to see as many of these films as you can, I Drink Your Blood will rank among some of the most twisted you will see. If there was ever a film that leaves the viewer thinking they need a shower, I Drink Your Blood is the one.