The 25 Horror Films That Have Scared Steve…Pt. 1

Over the course of the next few days, I will be listing off the 25 films that have scared the hell out of me. This is not a definitive list of the scariest films ever made but rather recommendations of films that I think will spook you. Feel free to comment on this and let me know which films scare you. Let the terror begin! 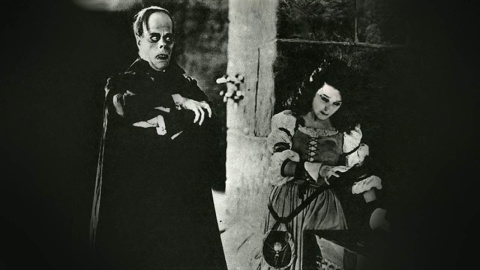 In the opening moments of this silent film chiller, a man explores the underground tunnels of a Paris opera house. He is alone in the dark and armed with nothing but a lantern. The camera remains stationary in front of him so we only get to see his reactions. Keep in mind there is absolutely no sound. All of a sudden, he sees someone or something. Not anything or anyone he recognizes. We the audience are not permitted to catch a glimpse. Judging by his reaction, I do not think we want to. This is the magic of the crown jewel of the Universal Movie Monsters heap. We are not assisted by the luxury of sound effects. Our brain fills in the horrors for us and sometimes that can be the most effective way to send an icy chill down your spine. While many of you probably are familiar with Lon Chaney’s legendary hellish phantom and you do not even realize it, he plays the phantom like he may never have had the chance to star in anything ever again. And it also features a breathtaking sequence in color (gasp!). This is a truly unforgettable epic that mesmerizes and horrifies.

24.) The Hills Have Eyes (2006)
Many have expressed their disapproval at this remake of the 1977 Wes Craven classic of the same title. But in a rare case, French director Alexandre Aja actually improves upon it. And it refuses to play nice. Vile, upsetting, disgusting and downright repulsive, it hits the ground running and barrels at you without slowing down. The opening sequence and credits are enough to give you nightmares for a week and all it consists of is a few scientists in HAZMAT suits testing radiation who meet a grisly end. This is followed closely by lots of stock footage of atomic bomb tests. Following a family who ends up getting trapped in the hills of New Mexico and who begin getting terrorized by colony of mutant miners who were subjected to radiation from bombs set of by the US government may not sound all the brutal, but trust me, do not enter lightly. It’s an unapologetic and unflinching little movie. About half way through the film explodes like a ticking time bomb and it’s incredible to me that this avoided an NC-17 rating. Oh, and I should tell you that the family has a newborn baby with them. And the mutants kidnap the child and plan on eating it. Start covering your eyes and chewing off your fingernails now. Not for the faint of heart.

What’s it about? I couldn’t tell you. What’s the underlying message? Beats me. What’s the point? The point is that it scares the living hell out of you and it’s impossible to know why. David Lynch’s three-hour grainy epic that appears to be about a remake of a film that was cursed blurs the lines of what is real and what is a nightmare. Half way through you will give up trying to follow it but you will not be able to avoid it’s icy glare. The trailer alone will have goose bumps running up and down your arms. What elevates it is Lynch’s use of surreal imagery. There truthfully should not be anything particularly scary about it, but there is. Through his use of close ups, every single character takes on the look of a deformed specter that is staring right into your soul. And wait for one particular image of a deformed face that, in my opinion, is one of the most disturbing images I have ever seen on film. I understand that the film may frustrate you on what is actually happening and what isn’t, but I can assure you that that is exactly what Lynch is going for. To drive you mad.

Have you ever had someone tell you about his or her encounter with something paranormal? I would guess that while they are telling the story, your imagination was busy bringing their story to life. The story was creepy because you were not there but you believe this person is telling you the truth. Plus, your imagination has filled in what took place. Long after they have told you the story, it still plays in your brain like it was your own experience. That is kind of what The Mothman Prophecies is like. And it’s based on true events that happened in the late 60s. Through the strong performances by Richard Gere, Debra Messing, and Laura Linney, they make you feel every ounce of their confusion, frustration, horror, and weariness that is brought on from the events take place throughout the film. Centering on the sightings of an otherworldly winged creature with “two red eyes” in Point Pleasant, West Virginia, the film has an unshakeable sense of doom woven throughout. We are constantly left with some strange account that leaves us gripping our seats or a notion that something truly horrifying is lurking just around the corner. Pay close attention to the details in this one. It’s what doesn’t jump right out at you that is actually the creepiest. The Mothman is everywhere even if we never really get a good glimpse. But it’s like your reaction to your friend’s paranormal experience, you do not know, but you can imagine.

Going mad has never been this unsettling. Roman Polanski’s portrait of a young woman (played by the gorgeous Catherine Denuve) who is seemingly losing her mind after her mother goes away for a weekend is all the more surreal because we cannot pin point the reason why. She is so normal! Turning an apartment into a claustrophobic living nightmare, the film makes exceptional use of space. Polanski makes the audience actually feel the walls closing in. And when someone knocks on her door, talk about tense! What truly makes Repulsion work is that it is a patient horror film. One that is all the more unsettling because this could be happening a few doors down in your apartment complex or just a few houses down. And to such a lovely woman at that! It’s a shame that Polanski’s other horror film, Rosemary’s Baby, overshadows that gem. Through it’s gritty scope and enclosed spaces, after seeing it you may want to evaluate your own sanity, go stand in an open field for a couple of hours, and you’ll never want to eat vegetables again.

Drop by tomorrow for more of the films that have scared the shit out of me. You know you’re intrigued and the terror has hypnotized you. And feel free to let us know what horror films scare you. Also, if you have not voted in our tiebreaker poll yet, Click Here to do so.