To put the breaks on third person narrative, if you asked me what my top five favorite books were, Mary Shelley’s Frankenstein is somewhere near the top three. Nowhere near five, but probably not one. The story line spoke to me one day in my senior year of high school (which at the time was required reading), and I finished the book almost overnight leaving me as the leader of discussion in class and in turn, the teacher’s pet. More than that though, Frankenstein and his Monster showed me that I wanted to write and that I could write and that I should write. Not that I ever had an interest in fiction, but imagine if one could find a story just as weird in reality and be able to share it in a style that got people really thinking about god and life and death—things, I believe average minds don’t consider on a daily basis. Like Frankenstein himself, I was on the brink of my greatest discovery and literature and I haven’t parted since.

As Dr. Frankenstein abandons house and home to bring life to this creature that he has scavenged graveyards and laboratories for, he becomes so overwhelmed with the idea of bringing a life into this world that he totally overlooks the natural processes of things. He has a fiancée and she’s dedicated and beautiful—why don’t they just go through the motions of creating life the way we all know how? This is a thought the viewer might only consider when sitting down to write a review because throughout the film as we watch those short moments before the Monster comes to life, it is easy to see that the man is passionate and should be left to his work. Plus, I wouldn’t mess with a madman like the good doctor. He’s got his sights set and isn’t interested in what gets in the way.

Science is the answer for Frankenstein and it is not biology, but electro-biology. He serves to show that life can be brought upon the dead by a single ray that surrounds us daily. But other oversights begin to come into play as he gets his Monster up and running; he realizes that he has taken no interest in where the organs and limbs originated, or who they belonged to. In fact, he has implanted the brain of a criminal into his Monster and with total faith in science, believes that it will have no ill effect on his creation. 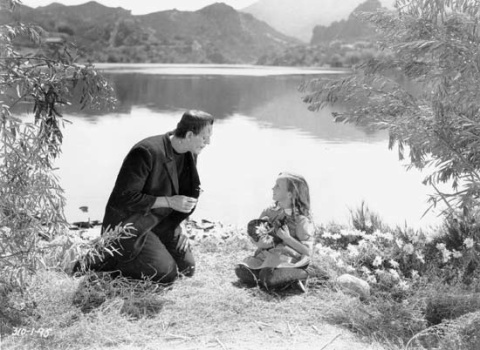 When the Monster kills off a loyal professor of his and innocent people living in the hillside, it is then that Dr. Frankenstein has come to the conclusion too late that faith and science are not tools that work in harmony. Like oil and water, when science failed him, Frankenstein was left to faith to decide that his Monster would not be criminally minded as he was warned.

Before I go on any longer sounding like a prewriting exercise for a thesis paper, and I could literally ramble on all day about the film, you should see it. It is the epitome of classic and a gateway to the literature behind it. In fact, while you’re at it, you should read The Invisible Man by H. G. Wells. The entire line of Universal Monster Movies is a lesson in the classics and will leave the viewer needing to know more. Leave us a comment if we can answer any questions, or seek them out yourself on the giant encyclopedia that is the internet. Watch clips, see the art that has been inspired by these films. It is a microcosm that one should at least test out before writing off.

When deciding which film to watch first in the entire collection, ask yourself if you want to save the best for last. Then decide whether you should watch Frankenstein first or last because if you watch it dead center of all the other films in the series, you’ll be thrown for a loop and have to go back and watch the other ones again.

Actually—there is no top five. You should just go see it.